More national selection details have been released for the 2017 season, and this time it’s for host country, Ukraine.

The semi finals of the national selection will take place on February 4th, 11th and 18th with the Grand Final set to take part on the 25th the same month.  So it’s becoming a busy month yet again in February for all of you national final lovers.

The national final will once again be a collaboration between state broadcaster NTU and commercial broadcaster STB.  After their first collaboration in 2016 resulted in a win for the country, they have decided that this method will continue for 2017. During the selection, two of the jury members have already been announced as Ukrainian composer and producer Konstantin Meladze and Eurovision 2016 winner Jamala.  The final decision on who will represent the host country at Eurovision 2017 is set to be decided by a 50/50 split between televote and jury. 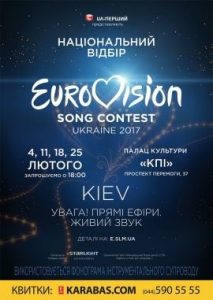 Tickets for the national selection are available now priced between 170 UAH (6 EUR) and 1490 UAH (53 EUR), and are available to buy from https://karabas.com/tours/eurovision.

At the minute, there are 39 wildcard songs that are fighting it out for a place to go directly to the Grand Final.  You can check out the STB website here, and voting is opening until January 10th. If you want to check out some of the songs from the wildcard round, you can listen to a selection of them here.  The leader so far has a massive advantage so far with over 64,000 votes compared to 2nd place with just over 10,000.  You can check out the current leader below; Kuznetsoz “Deep Shivers”.

Ukraine won the right to host Eurovision 2017 when Jamala won the contest in Stockholm with song “1944” with 534 points.  The contest will be held in Kyiv, Ukraine after a long, somewhat controversial, host bidding war.

Who would you like to see represent Ukraine at Eurovision 2017? What do you think of the current leader in the wildcard selection? Who else has a great song so far in the wildcard? Let us know below in the comments.