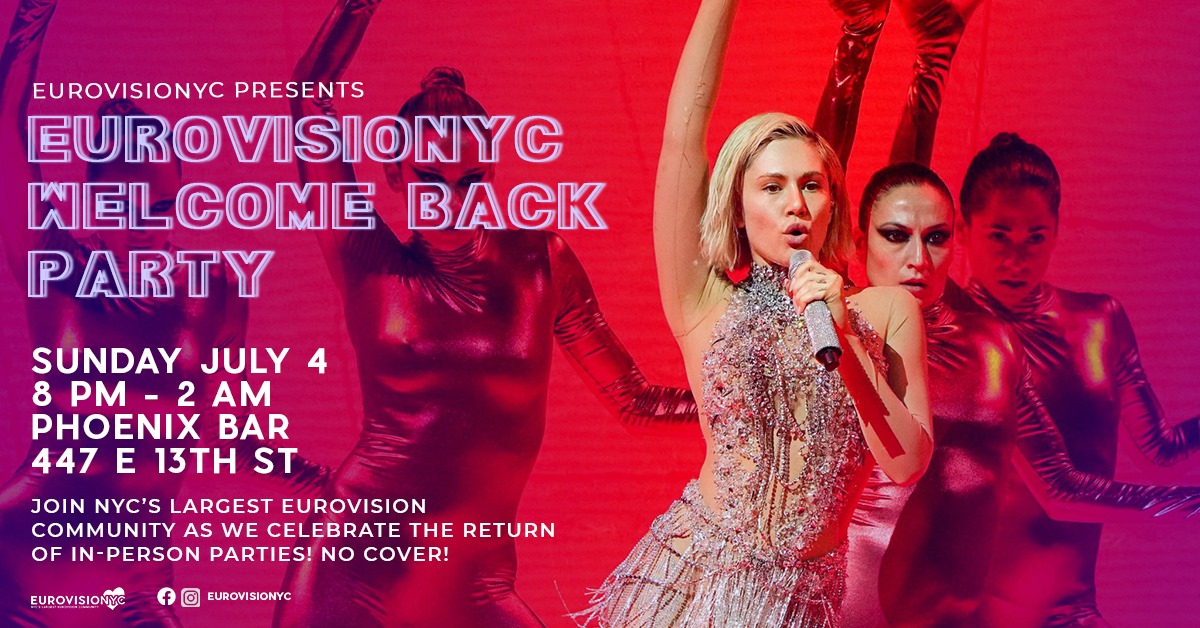 As America looks to celebrate its birthday on Sunday, July 4th a section of the country will take a much more European focused angle of celebration. EurovisioNYC, the unofficial fan club thread together by a mix of ex-pats and overly obsessed New Yorkers returns from its COVID-19 pandemic hiatus.

EurovisioNYC has been breaking ground for the past few years by replicating the magic that happens at Euroclub during each year’s Eurovision Song Contest and drawing artists and crowds that one would expect to only on the other side of the Atlantic. Even while the Eurovision phenomenon has struggled to garner a sizeable viewing audience and its broadcast hasn’t had a stable home on the airwaves, die-hard fans in New York have found their tribe.

And it’s not just fans who are catching on to discovering the epicenter of America’s Eurovision scene. Eurovision artists have been consistently turning up to take part in the magic. Last November, the club hosted UK fan favorite, SuRie to a packed club in Manhattan’s Greenwich Village. It has previously hosted artists from Ireland, Montenegro, and Norway. The enthusiasm from artists to come over to greet Eurovision fans outside of Europe shows no sign of slowing down – even if Covid has temporarily slowed their in-person arrival.

In 2020 as amidst the first ever Eurovision Song Contest cancellation, fans held tight to each other and found a way to connect during a somber time. The light of the Eurovision community held strong, even in New York City. While club organizers scrambled to make the best of a virtual format to celebrate songs that were destined for the 2020 stage – they discovered they had a neighbor in Ireland’s 2020/1 representative, Lesley Roy.

The club has also hallmarked the phenomenon of having its fans take to the stage to compete in a lip sync battle that uncorks the emotion and passion of its fans and lets the enthusiasm speak for itself. At one of the last events, club-goers were treated to an unbelievable rendition of Spain’s 1990 entry, ‘Bandido’ a moment that went viral on social media. A likeness and precision so good that drew praise even from the Spanish fans themselves.

By amassing a loyal following of fans and capitalizing on the cosmopolitan nature of New York City, the club has managed to welcome the US debut for some previous Eurovision contestants and has built a buzz ahead of the arrival of the American Song Contest. This week, TimeOut NYC has bestowed upon it the title of one of the ‘best things to do in NYC this weekend’ https://www.timeout.com/newyork/things-to-do

With the dawn of the American Song Contest around the corner and the enthusiasm of the Eurovision fans in New York City, we can’t wait to see what this TimeOut NYC recommended party is going to do next. If you live in New York or have a chance to visit – make sure you check out their Facebook page and follow the club on Instagram.