We are just one month and a few days ahead of this year’s Eurovision Song Contest in the capital city of Austria, Vienna, where all delegations and fans will gather for the occassion. ORF together with the European Broadcasting Union and all the participating broadcasters, plus this year’s partnered sponsorship will be offering, as every year, a wide variety of events related to the contest in order to keep the spirit of the fans alive during all 2 weeks the contest will last in the city.

In this article, we present you the full schedule which has been released for the second euro-week, from the 18th of May on, the Eurovillage will be opening its doors. This year it will be located in the heart of the city at the Town Hall Square, mostly known as Rathausplatz. Events from fashion shows to the public viewings of the shows will take place just there. 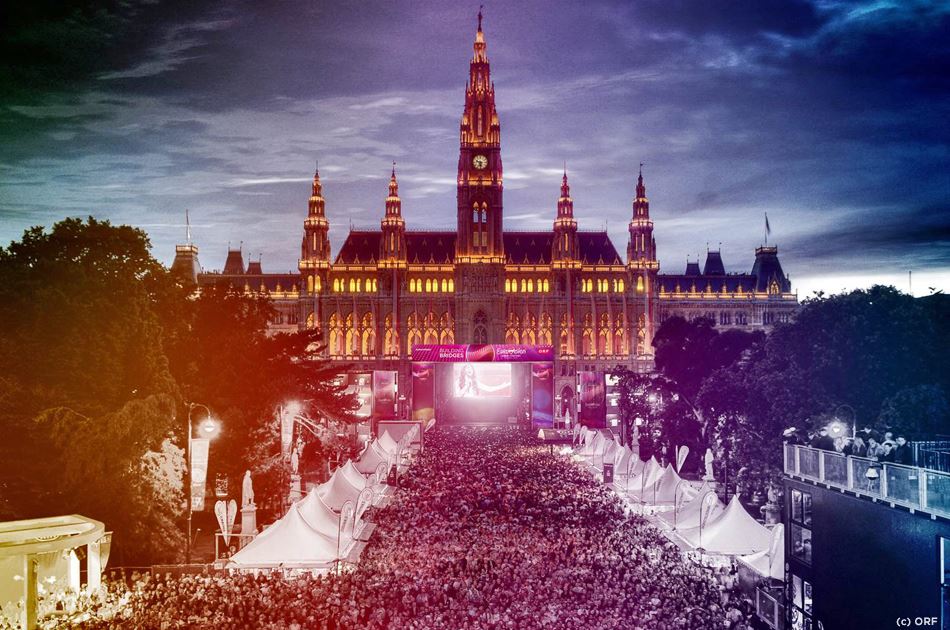 One of the most important events to take place at the Eurovision Village will be the traditional Opening Ceremony with the 40 delegations arriving on a 200-metre red carpet on the 17th of May from 18.00 onwards. Fans and press have the chance to meet all the artists on their way to the City Hall.

Eurovision.tv reports, ‘One of the biggest attractions at the Eurovision Village will be the big stage in front of the Vienna City Hall. Daily events with live performances with the contestants of this year’s contest as well as theme days such as “Conchita Wurst – Queen of Austria”, “A Tribute To Udo Jürgens” and “The 60 Years of the Contest” will be held’.

All 40 participating countries can also introduce themselves under the motto “Hello Vienna. Welcome Europe” by showing off their different sides in exhibition style.

On Monday, the 18th of May, a fashion show with emerging and renowned fashion designers from many of the participating countries will take place.

Haven’t you got a ticket for any of the shows inside Wiener Stadthalle? Eurovillage will also feature public viewings of the shows plus an innovate way of voting for your favourite songs, promoted by OSRAM, announced today as the Official Lighting Partner of the 2015 contest, by using Lightify. Lightify is an innovative LED lighting system controlled via a smartphone app. Visitors to the Eurovision Village at Rathausplatz will be able to use Lightify to cast their “votes” and show support for a song. The square will be bathed in red light to signify maximum points, and blue at the other end of the spectrum to indicate one point.

“We transform the largest entertainment spectacle in the world into the largest lighting technology event with our light systems,” commented Hans-Joachim Schwabe, CEO of the Osram Specialty Lighting Business Unit. “We want to turn the show into a really unforgettable event for the audience.” 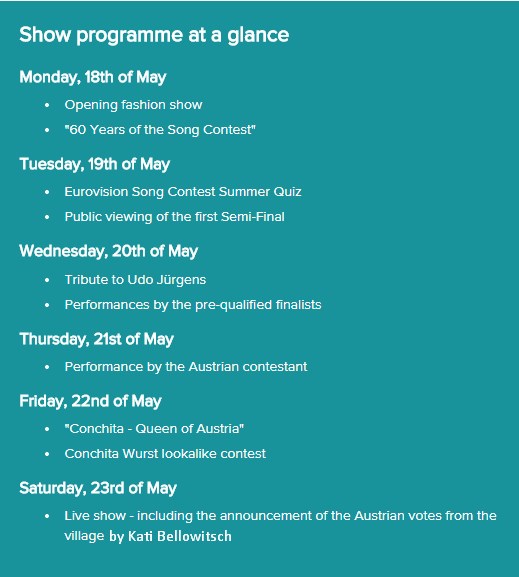 Eurovision.tv has presented the official programme!