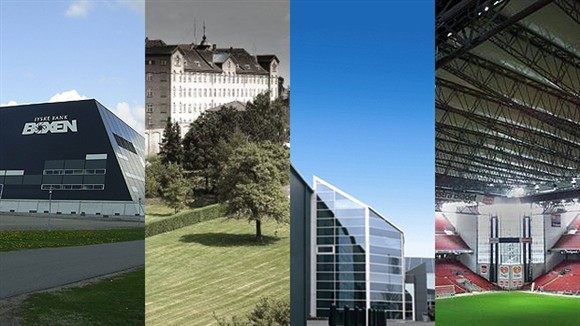 UPDATE: It’s Copenhagen!
Today the deadline for a Danish city to submit a bid to host next year’s contest has finished. Danmarks Radio has reported that there are 4 candidates: Copenhagen, Herning, Fredericia and Horsens. Aalborg withdrew some days ago out from the race.

Copenhagen has sent a total of 3 different places in the city to host the contest. Parken is one of them, unless it’s not sure that the contest is going there again, as DR Organisation director Lars Bernhard Jørgensen has reported. 38000 people gathered into the arena back in 2001 and it seems that DR does not agree with that situation again, they want to make the contest smaller and more intimate, as SVT did this year, so the stadium could be too large for today’s production standarts. Another bid is a tent in DR headquarters, which does not have an arena at all, but they were looking for a chance which could let them hosting the contest there, so a solution has now been revealed: installing a massive tent outside the DR Byen buildings, but time will tell if this one joins all the requeriments. The last one in Copenhagen is B&W-Hallerne, located in the Refshaleøen area of Amager in Copenhagen, this old industrial complex has become a “playground for the culture and experiences industry”. With its huge indoor spaces Wonderful Copenhagen claims that the venue can be tailormade to suit the needs of DR and the EBU. According to the organisation use could be made of its “raw and industrial look”.

Herning is the second bidding city to host the 2014 edition. The multifunctional Jyske Bank Boxen would be used for the occasion with room up to 15.000 during the contest, slightly larger than this year’s Malmö Arena. The Danish national final, Dansk Melodi Grand Prix, was already held inside this arena. Hotel capacity may be an issue but the city has received the offer of help from neighbouring municipalities, like Aarhus. We leave all this to the criteria of the EBU and DR.

Fredericia has chosen the Messe C and claims to have one of the best hotel offers and good transport links outside Copenhagen. The venue would be able to welcome up to 8.000 people, which would be the smallest capacity for Eurovision since 2005.

And last but not least, Horsens, this year’s most shocking and unusual bid, provides Fængslet. The prison would welcome 13.000 people and would be reconstructed into a new indoor arena with a huge crystal roof. Other details regarding hotel capacity in the city have not been revealed at the time of writing.

Odense has today got the chance to host next year’s edition of the Danish national final for the contest, Dansk Melodi Grand Prix. After this year’s edition in Herning’s Jyske Bank Boxen, the contest will be probably moving to Arena Fyn, which can hold up to 5.500 during a concert. Odense’s mayor is really happy with this decision from the Danish broadcaster and believes that the city is ready to also welcome the people weeks before Eurovision and during the DMGP.