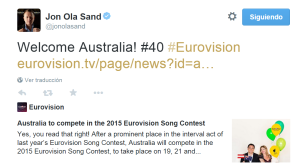 “It’s a daring and at the same time incredibly exciting move. It is our way of saying; let’s celebrate this party together!” stated Jon Ola Sand.

Australia will be allowed to vote in both Semi-Finals and the Grand Final. Although yet not defined, several possibilites are being explored as to how to score the Australian points. As for now, a 50-50 televoting and jury combination is being considered.

As a result of the participation of Australia, this year a total of 27 countries will sing in the Grand Final set to take place in Vienna on May 23rd. If Australia was the winner, it would not be allowed to host next year’s Eurovision Song Contest since the 2016 edition is set to take place in a European country. Latest rumors point at Germany as possible host in case Australia won the competition.

The deadline for Australia to reveal its entry has been set on March 16th.

What do you think about this decision?

22 thoughts on “Australia to compete in the Eurovision Song Contest 2015!”