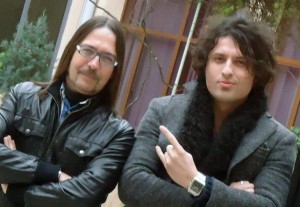 In December, Adrian Lulgjuraj & Bledar Sejko won their preselection. They have recorded the final version of “Identitet”

The Albanian rock stars Bledar Sejko and Adrian Lulgjuraj will perform their song Identitet in the second semi-final in Malmö. The final version of Identitet, the song which will represent Albania in Malmö, was presented this morning at the media. During the presentation, they given to know also the official video of the candidature.

The clip has been led by Ergys Lubonja and was shot in Top Fest studies and in a suburb of the capital, Tirana, where there are several buildings unfinished building.

-You can watch the official music video and listen to the new version of Identitet here: