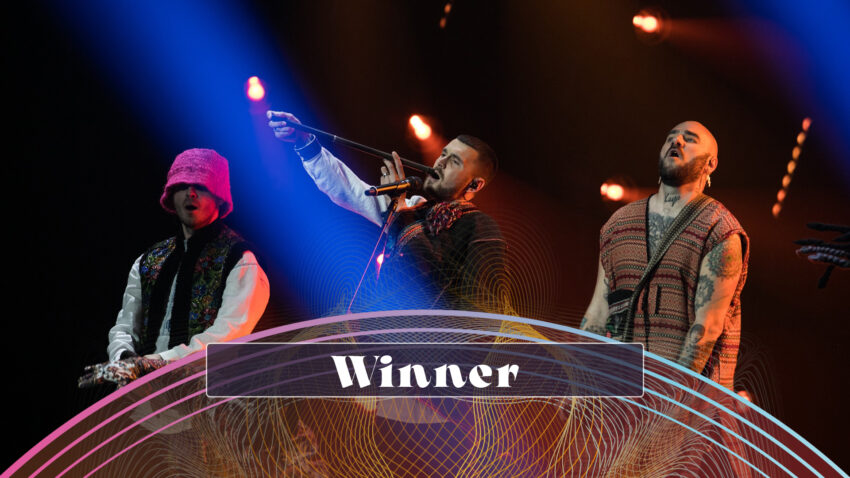 We have a new winner in the Eurovision history! Ukraine has just won the 66th edition of the Eurovision Song Contest thanks to Kalush Orchestra and song “Stefania”.

Ukraine has reached the first place with an amount of 631 points. In the second place, United Kingdom has finished with a total of 466 points, while Spain has received 459 points and has finished in the third place.

40 countries have participated at this year’s Eurovision Song Contest, but only 25 have reached the Grand Final show, broadcast live from the PalaOlimpico, located in the beautiful Italian city of Turin. The venue has a capacity of 14,000 spectators.

The slogan of this year’s Eurovision Song Contest was “The Sound of Beauty”, and with that slogan in mind 25 countries performed tonight during the Grand Final of Eurovision 2022 to win the Crystal Microphone trophy.

You can take a look at the final scoreaboard below:

Who is Ukraine’s Kalush Orchestra?

Ukraine chose to send Kalush Orchestra to the Eurovision Song Contest 2022, after a tumultuous national final, during which another artist, Alina Pash, was chosen first, but was disqualified because of political reasons. So, that eventually meant that the runner-up of the national Ukrainian selection won the ticket to Turin, and in this case this was Kalush Orchestra.

Kalush is a Ukrainian band which was formed in 2019. The group made its debut in the music industry with the song ‘Ne marynui’. After two music singles, the band signed a contract with the record label Def Jam Records, this happened in the same year of their debut.

By the end of 2021, the group had established itself as a rap genre band with a strong influence and roots in Ukrainian folklore. The original team Oleh Psiuk, Ihor Didenchuk, and MC Kilimmen was joined by artists Tymofii Muzychuk and Vitalii Duzhyk. This decision also meant a change in the name of the group to “Kalush Orchestra”.

In February 2022 Kalush Orchestra took part in Vidbir 2022, the Ukrainian national pre-selection for Eurovision. With their song “Stefania” they managed to score a total of 14 points, which earned them second place. After much controversy, and the withdrawal of the winner, Alina Pash, the group became the one to represent the country in Turin.

From their selection up to the present day, Ukraine has been embroiled in a war with the Russian government, but finally the Ukrainian public body, Suspilne, was informed that the group will be able to travel to Turin after obtaining official permission to do so.

HOW THE WINNER WAS CHOSEN?

Viewers from all forty countries taking part in the Eurovision Song Contest 2022 were invited to vote via the official app, telephone and/or SMS. The voting window was open after the last song had been performed, and ended 45 minutes later. Televoters determined 50% of the outcome while professional juries did so with the other half of the voting combination according to the performances of yesterday’s Jury Semi-Final rehearsal show.

After the interval acts, the decisive moment came, where the announcement of the points by the professional juries of each competing country started. Only the 12 points were announced by famous national celebrities of the competing countries to save time, since 40 countries needed to grant their votes. The points that were awarded were: 1, 2, 3, 4, 5, 6, 7, 8, 10, and 12 points. After this part, the televoting results were revealed, announcing the total amount of public points scored by each country, starting with the country that was awarded the least points from the national professional juries.

The winner and the final result of the Eurovision 2022 was the sum of both jury and televoting points.

Laura Pausini, Alessandro Cattelan and Mika were the hosts of the three shows of this year’s edition. Laura is one of the most famous Italian artists in the world who rose to fame in 1993 as winner of the debutants section of the Festival Di Sanremo. Alessandro is one of the best-known Italian radio and TV presenters for presenting, among other formats, the Italian edition of “Total Request Live”, broadcast on MTV Italia, and “Le Iene”, broadcast on Italia 1. The young singer Mika, Michael Holbrook Penniman Jr, became internationally known with his first album “Life in Cartoon Motion”, which sold a staggering 5.6 million records and won the Brit Award.

The Grand Final of Eurovision 2022 started with a video from Piazza San Carlo in Turin, where The Rockin’ 1000 band performed “Give Peace a Chance”, an anti-war song by John Lennon to honor Ukraine at these difficult times that they are suffering.

Once inside the arena in the PalaOlimpico, our host Laura Pausini sang along with  The Rockin’ 1000 some of her hits like “Benvenuto”, “Io canto”, “La solitudine”, “Le cose che vivi” and her new song “Scatola”.

Apart from Laura Pausini and Mika’s performances, the contest has featured two very special guests. Last year’s winners Måneskin presented their new single “Supermodel” and then, a cover of Elvis’ song “If I Can Dream”. And the very first Italian Eurovision winner, Gigliola Cinquetti, who won the competition in 1964, returned to the contest to perform her winning entry “Non ho l’età”.

How much did you enjoy the show? Do you like the 2022 winner? Remember that you can watch the show again and again whenever you want here: