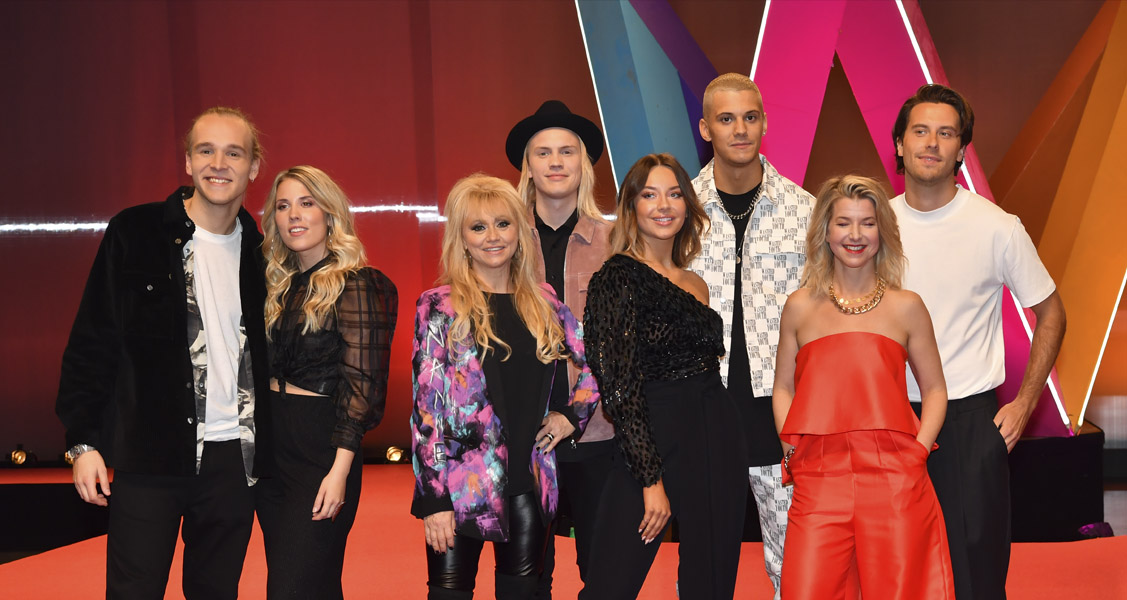 The show will be broadcast live from Malmö at 20:00 CET. Below you will find all the necessary information regarding tonight’s semi-final. Hosts, artists, running order, backing vocalists and more!

1. Frida Öhrn – “We Are One”
Text & music: Frida Öhrn, Hampus Eurenius, Nicklas Eklund
Frida returns to Melodifestivalen for the fourth time but it’s the first time she will compete as a solo artist. Frida was a member of Oh Laura group – which had an international hit in 2007 called “Release Me” – and later in the pop and country group Cookies ‘N’ Beans. In 2014, Frida released her debut single as a solo artist titled “What Are You Waiting For”.
Backing vocalists of the number (off stage): Beata Harryson and Evelina Olsén
Dancers: –
Choreographers and performance creators: Lotta Furebäck and Sacha Jean-Baptiste

2. William Stridh – “Molnljus”
Text & music: Markus Lidén, Christian Holmström, David Kreuger, William Stridh
William is relatively new to the Swedish music scene. He took part in Idol 2018 where he finished 5th. Before that, he was a member of the group The Audrey.
Backing vocalists of the number (off stage): Lars Säfsund and Christian Holmström
Dancers: –
Choreographers and performance creators: Lotta Furebäck and Sacha Jean-Baptiste

3. Nanne Grönvall – “Carpool Karaoke”
Text & music: Nanne Grönvall, Peter Grönvall
Nanne Grönvall has been an artist for 35 years and during this time she has made her own record of participation in the Melodifestivalen, as a solo artist, group member and songwriter. In addition, during her career she has participated in many musicals and theater plays, released several albums and many singles. The album “20 år med Nanne ” from 2005 sold platinum and was second best on the album sales list in Sweden. She has participated in Melodifestivalen 1986, 1987, 1996 (won), 1998, 2003, 2005 and 2007.
Backing vocalists of the number (off stage): –
Dancers: Lisa Arnold, Edin Jusuframic, Anna Ståhl, Lisa Stadell, Camilla Fredén and Henric Flodin
Choreographers and performance creators: Roine Söderlundh, Lotta Furebäck and Sacha Jean-Baptiste

4. Victor Crone – “Troubled Waters”
Text & music: Dino Medanhodzic, Benjamin Jennebo, Victor Crone
Victor’s artist name was at the beginning of his career Vic Heart, and in 2011 he released his first single “Hot Summer Night”. Since then he has both participated in Melodifestivalen 2015 and represented Estonia in the Eurovision Song Contest last year.
Backing vocalists of the number (off stage): Lars Säfsund, David Björk and Andreas Moe
Dancers: –
Choreographers and performance creators: Edin Jusuframic, David Nordström, Lotta Furebäck and Sacha Jean-Baptiste

5. Ellen Benediktson & Simon Peyron – “Surface”
Text & music: Paul Rey, Laurell Barker, Anderz Wrethov, Sebastian von Koenigsegg, Ellen Benediktson
Ellen Bendiktson was discovered when she was a stand-in for the French artist in 2013 during rehearsals for the Eurovision Song Contest in Malmö. She then participated in the Melodifestivalen for two years in a row, 2014 and 2015. In 2014, the same year that Ellen debuted in the Melodifestivalen, Simon Peyron also made his debut. He competed as a singer in the metal band Outtrigger. Since 2017, Simon has invested in his solo career.
Backing vocalists of the number (off stage): Emelie Fjällström and Lars Säfsund
Dancers: –
Choreographers and performance creators: Lotta Furebäck and Sacha Jean-Baptiste

7. Hanna Ferm – “Brave”
Text & music: David Kjellstrand, Jimmy Jansson, Laurell Barker
In 2014, Hanna competed in Talang where she reached the second semi-final. In 2017 she took part in Idol and managed to finish in the second place behind Chris Kläfford. She has participated in Melodifestivalen 2019 in a duet with LIAMOO and released her own music.
Backing vocalists of the number (off stage): Susanne Bertlin and Laurell Barker
Dancers: –
Choreographers and performance creators: Lotta Furebäck, Sacha Jean-Baptiste, Zain Odelstål and Dennis Bröchner