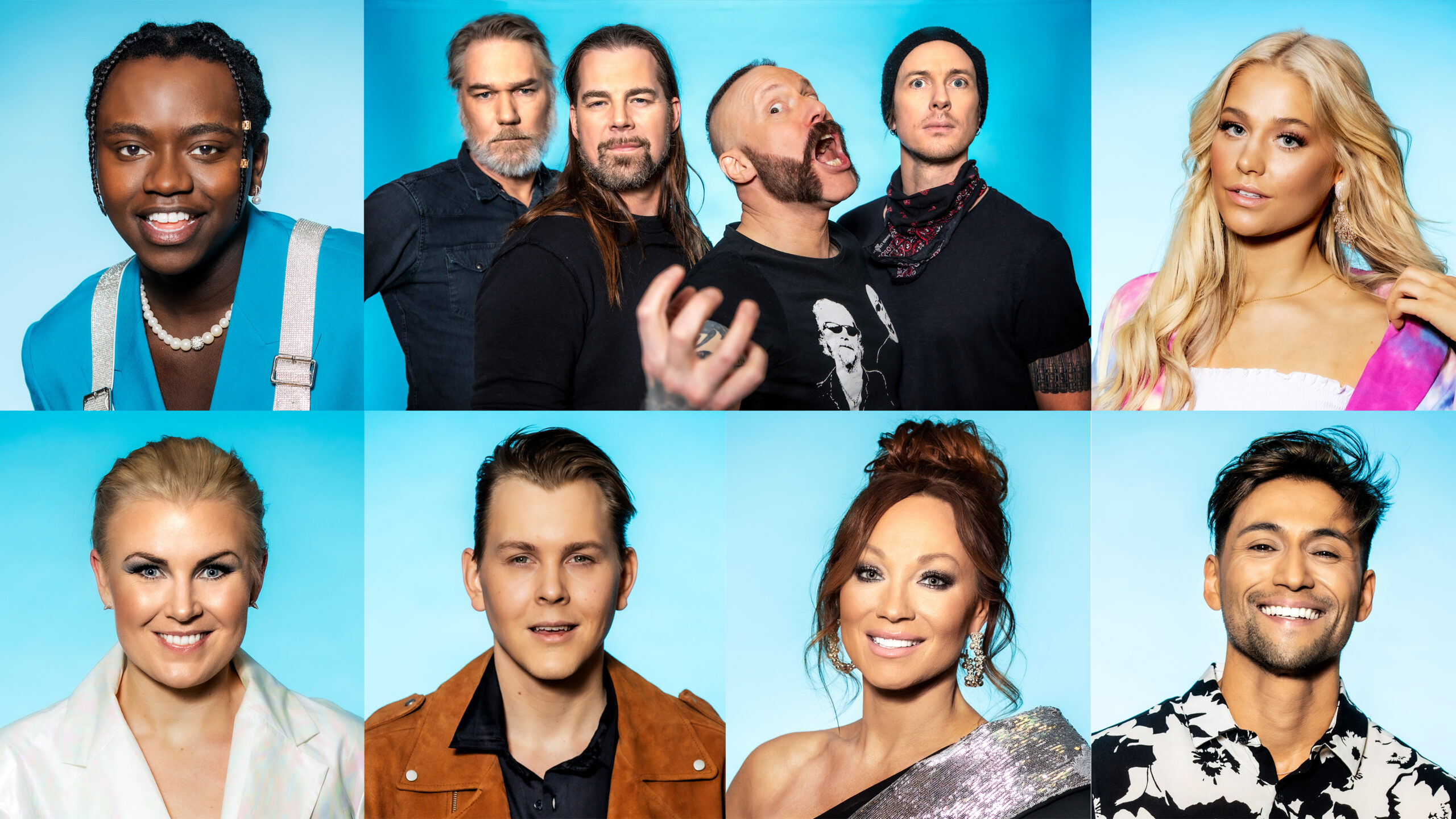 Melodifestivalen, the national selection that most fans are waiting for, continues in Sweden tonight!

The third semi-final of Melodifestivalen 2021 will be broadcast live from Stockholm at 20:00 CET. Below you will find all the necessary information regarding tonight’s semi-final. Hosts, artists, running order, backing vocalists and more!

1. Charlotte Perrelli – “Still Young”
Text & music: Erik Bernholm, Thomas G:son, Charlie Gustavsson, Bobby Ljunggren
No introductions needed for the two-time Melodifestivalen winner and Eurovision winner of 1999! Charlotte Perrelli is back in Melodifestivalen for a fifth time! Her most recent appearance in the show happened in 2019 where she sang a duet with Dana International as part of the interval act of the final, celebrating the 20 years of her Eurovision entry “Take me to your heaven”.
Charlotte about her entry: “The song is pop and contemporary with loads of schlager. Up in our heads, we never grow old, and that’s in a certain way what the song is about. When I heard it the first time, I felt ‘God, this is just right’. It was a little like in 2008 when I first heard ‘Hero’, that feeling of ‘I can’t miss this’.”
Backing vocalists of the number (off stage): Dea Norberg
Choreographers and performance creators: Lotta Furebäck, Sacha Jean-Baptiste, Jennie Widegren
Dancers: Niklas Arleryd, Thomas Benstem, Kamilla Halid, Anna Näslund

2. Emil Assergård – “Om Allting Skiter Sig”
Text & music: Emil Assergård, Jimmy Jansson, Jimmy ”Joker” Thörnfeldt, Anderz Wrethov, Johanna Wrethov
Emil makes his debut in Melodifestivalen this year. He’s 29 years old and comes from a village outside of Sollefteå in northern Sweden. He released his first album in 2013 and has received Platinum and Golden certifications. His most streamed song on Spotify is “All In” with more than 33 million streams.
Emil about his entry: “he message of the song is that it’s never too late to start anew. Everything can be solved if you only have the will and stamina to keep on fighting. When the viewers will get to see my performance, they can expect a high energy, and they might feel more a part of the performance than they think that they will.”
Backing vocalists of the number (off stage): Lars Säfsund
Choreographers and performance creators: Lotta Furebäck, Sacha Jean-Baptiste, Jennie Widegren
Dancers: –

3. Klara Hammarström – “Beat Of Broken Hearts”
Text & music: Niklas Carson Mattsson, Fredrik Kempe, David Kreuger, Andreas Wijk
Klara debuted in Melodifestivalen last year with her pop song “Nobody”, finishing 5th in her heat. She’s back with a ballad this time written by Fredrik Kempe among others. Klara has been a successful rider and was part of the team that took bronze in the field competition in the pony European Championship 2015. In autumn 2018 she appeared with her parents and nine siblings in the SVT series Familjen Hammarström.
Klara about her entry: “It’s a song that a lot of people can relate to with a lovely message, and I would say that it’s a very beautiful song that could almost have been taken out of a Disney movie.”
Backing vocalists of the number (off stage): Emelie Fjällström, Dea Norberg
Choreographers and performance creators: Lotta Furebäck, Sacha Jean-Baptiste, Jennie Widegren
Dancers: –

4. Mustasch – “Contagious”
Text & music: Ralf Gyllenhammar, David Johannesson
If the frontman of the group looks familiar that’s because he has already taken part in Melodifestivalen 2013 with “Bed Of Fire” and took the 7th place in the final. We are talking about Ralf Gyllenhammar who returns to the contest but this time with his band, Mustasch. The band is one of the most successful hard rock bands in Sweden.
Mustasch about their entry: “This is a classic goddamned Hard Rock song, with a very contagious chorus. In 2013, I took part without these costumers [the band]. This year, we have a real Hard Rock song, according to them, and then it was fine for them to take part, of course.”
Backing vocalists of the number (off stage): –
Choreographers and performance creators: Lotta Furebäck, Sacha Jean-Baptiste, Jennie Widegren
Dancers: –

5. Elisa – “Den Du Är”
Text & music: Ingela ”Pling” Forsman, Elisa Lindström, Bobby Ljunggren
Elisa returns to Melodifestivalen seven years after her first attempt. She finished 5th in her heat back in 2014 with “Casanova”. She is singing from a very young age and has also participated in Lilla Melodifestivalen, the preselection for jESC. She has won multiple Swedish music awards and taken part in various TV programs.
Elisa about her entry: “If I should describe my song in one sentence I would say that words can’t describe it. It’s big for me.”
Backing vocalists of the number (off stage): –
Choreographers and performance creators: Lotta Furebäck, Sacha Jean-Baptiste, Jennie Widegren
Dancers: Celine Diop, Irmeli Gehring, Ellinea Siambalis, Olle Ström

6. Alvaro Estrella – “Baila Baila”
Text & music: Linnea Deb, Jimmy ”Joker” Thörnfeldt, Anderz Wrethov
Alvaro Estrella, a true Latino who has roots in Chile and experience in Melodifestivalen and Eurovision where he danced and provided backing vocals in many artists. In 2014, he performed as an artist in Melodifestivalen with “Bedroom” and finished sixth in the semi-final. Last year he took part in the contest with Mendez where they finished 11th in the final.
Alvaro about his entry: “The viewers can expect a scintillating Latino party with warmth and love as the focus, because I want to bring the party home to you, the viewers. The song came to me from the songwriter Linnea Deb, who sent it over. I just said: ‘That’s the one’. It turned out so well, and I’m so stoked for you to hear it.”
Backing vocalists of the number (off stage): Lars Säfsund
Choreographers and performance creators: Lotta Furebäck, Sacha Jean-Baptiste, Jennie Widegren
Dancers: Amir Ashoor, Lovisa Bengtsson, Kenny Lantz, Victoria Pérez

7. Tusse – “Voices”
Text & music: Joy Deb, Linnea Deb, Jimmy ”Joker” Thörnfeldt, Anderz Wrethov
The 19-year-old winner of 2019 Idol makes his debut in Melodifestivalen. In 2018 he took part in Talang (Sweden’s got talent) where he reached the semi-final. Since then he released various singles.
Tusse about his entry: “My song happened when I was sitting in a session with Joy Deb and Linnea Deb and the rest of the group. We were writing music, but nothing felt right, and nothing felt close to the heart. But then it transpired that they had already written such a beautiful song that I got to hear. I just said: ‘That’s the one! That’s the one we should go for.’ The song is about fellowship, freedom and the importance of all voices being heard.”
Backing vocalists of the number (off stage): Lars Säfsund
Choreographers and performance creators: Lotta Furebäck, Sacha Jean-Baptiste, Jennie Widegren
Dancers: Keisha von Arnold, Fatou Bah, Lamin Holmén, Timothy Waliggo Kakeeto