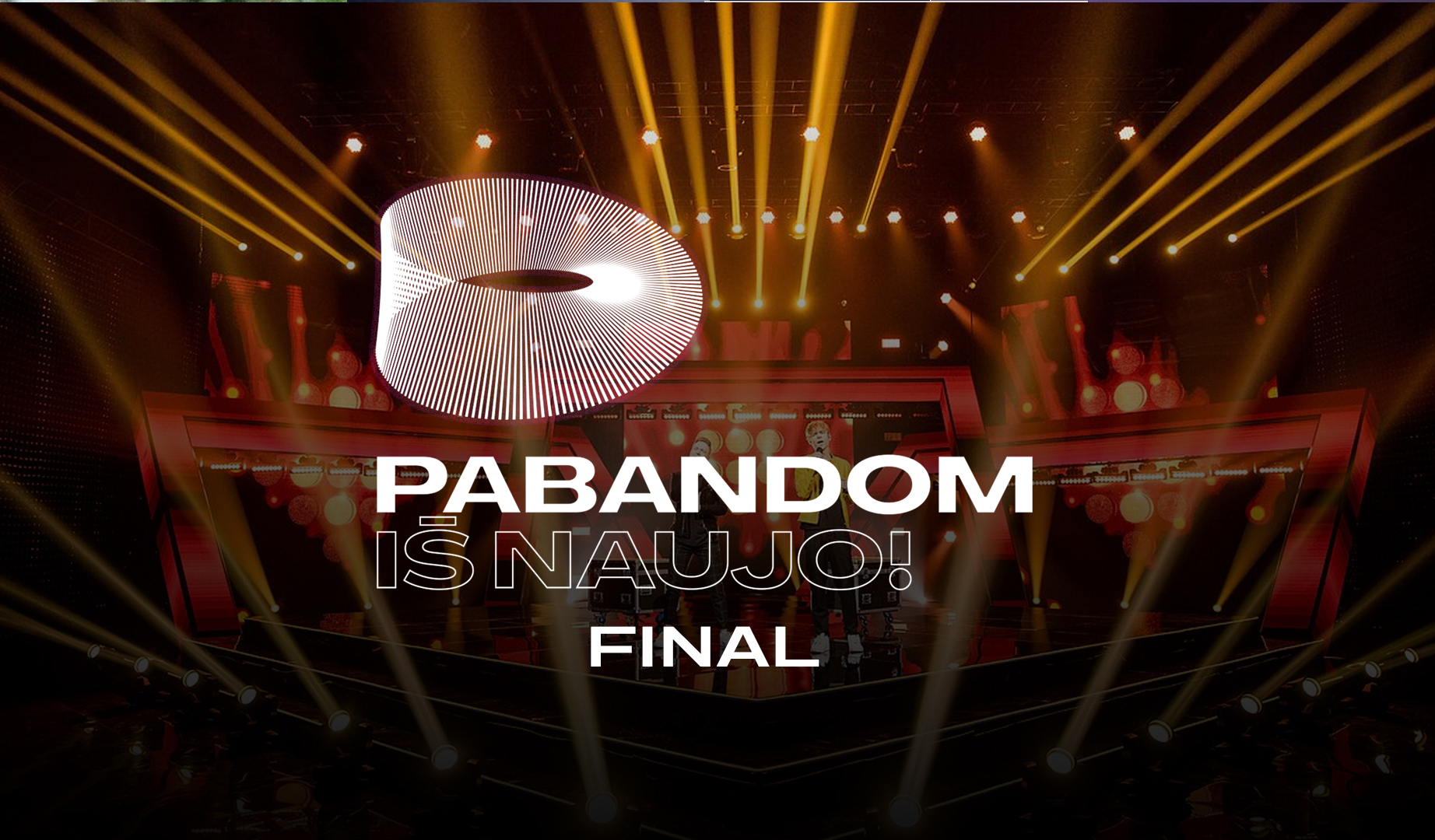 Tonight, Lithuania concludes the journey to decide who will carry their colors in this year’s contest! Following a tight semi-final with only two points of difference between the third and the seventh place, five acts aspiring to take the tickets off The Roop qualified to tonight’s final.

As usual, Ieva Stasiulevičiūtė and Vytautas Rumšas Jr. will be in charge of guiding viewers through the show, this time broadcast live! The jury will be larger than in previous shows with a total of eight members making up the first half of the votes, and due to this they will not join the artists in the TV studio holding the final―instead, they will connect remotely.

The TV viewers back at home represent the other half of the results, as all Lithuanian residents can vote live during the show for their favorite performances by sending a text message to 1669 with the running order of preferred entry. The broadcaster will also double the number of votes allowed from a single phone number, increasing to ten.

The voting network will be overseen by independent auditors from Grant Thornton Baltic during the show. All the revenue from the televoting will be destined to funding the winner’s Eurovision performance while, LATGA, Lithuania’s collecting society organization, will give out a five thousand euro award to the songwriters of the winning entry! Keep in mind that, in the event that there is a draw between multiple entries after converting both rankings to the Eurovision score format, the jury will act as a tiebreaker.

The rehearsals for the show kicked off yesterday! For a penultimate time, LRT’s Vilnius TV studios turned into a large concert hall for the six finalists vying to reach the Eurovision tickets tomorrow evening during a final rehearsal before the live show.

Audrius Giržadas, head of the country’s Eurovision delegation, explained to LRT.lt that ‘I am very grateful to all participants of this year’s national selection, who did not run away and took part despite knowing the difficult situation of the music industry nowadays. I can rejoice in the really strong and varied performances that await us at the Saturday finals.’

The Roop part as the clear favorites of the selection, as their entry Discoteque has been sitting at the top of Lithuanian charts since its release, and they are widely projected to win the televote. Despite that, frontman Vaidotas Valiukevičius appealed to his fans on Instagram explaining that ‘the finals are not predetermined’ and asking not to think that ‘after all, everyone else will vote so I don’t need to.’

As such, all other candidates’ hopes rest on the jury. Most fans widely recognize Audrius Petrauskas, who performs under the stage name Gebrasy, as the strongest candidate from the semi-finals, taking part in his fourth attempt at the selection with his pop-ballad Where’d You Wanna Go?. The entry garnered a lot of support from the start, with over 100 thousand YouTube views and earning the maximum score possible from the jury in last week’s show.

As a result, especially given the jury’s condition as tiebreakers, some fans have started pondering whether Audrius could win the jury’s support and eventually win the selection. As unlikely as this seems, given how The Roop were two points short of earning the maximum jury score in last year’s final, it does appear that the trio’s victory is not guaranteed.

Voldemars Petersons, a Latvian-born singer established in Kaunas, is also one of the biggest surprises of the selection. After three consecutive appearances with different sorts of ballads that failed to attract any support, always dying in the first stages, he chose to submit an uptempo entry and it appears to have worked!

The artist, who performs with guitarists Mr. Jumbo, Jonas Andriuškevičių and bassist Julius Bražėnas as a new band under the name of TheBreakHearters, has been steadily working on new versions of his entry Never Fall for You Again over the past weeks and has reached a loyal number of fans on social media, even if small.

This leaves us with three candidates left: Evita Cololo, Martyna and the duet of Titas and Benas. Out of these, arguably Titas and Benas have the biggest fanbase, as they became popular on Lithuanian social media in late 2019 following their participation in X Factor.

As they explained on an interview to Baltic outlet DELFI, the artists were surprised by the reception of their entry and never believed they would reach the finals. While they hoped for The Roop’s victory, the two singers revealed that they are currently focused on recording a music video for their entry No, hoping to also release a Lithuanian version of the track. Their performance will simply be an evolution of their past two performances, without any meaningful changes noticed at yesterday’s rehearsals.

Coming from a different background, Evita Cololo performs as the winner of the last season of Lietuvos Balsas, the country’s version of The Voice. Her entry Be paslapčių stands out for being the only finalist song performed in Lithuania, which the singer believes would ‘not be an obstacle at Eurovision,’ as well as making use of a clever trick combining the studio’s cameras with a portrait mode stream from her personal phone on stage.

Her entry, which talks about teenager love, is written and endorsed by hip-hop icon Vitalijus Puzyriuovas, who performs as Vaiperis. However, she doesn’t hold any ambitious expectations, as she explained last week that her main goal performing is to gain further stage experience, and she has been supportive of the incumbent band The Roop on their journey to Rotterdam.

Martyna Jezepčikaitė tops off the list as another X Factor alum, being one of the finalists in the last season. While she already has plenty of experience performing live, she takes part as the youngest artist out of the six, having turned 18 last fall and facing her high school finals later this year.

Her performance also appears set to be similar to the semi-final, keeping the black overalls designed by Agnė Kuzmickaitė she has worn in every show, though she promised other surprises in an interview to Ramūnas Zilnys earlier this week. Her energetic entry Thank You Very Much has also received support from the Lithuanian audience over the past weeks, leading the televote’s scoreboard at the first heat with over two thousand votes.

All that said, it’s all open! Even though The Roop are indisputably the favorites to take the ticket to the Netherlands, they are facing some strong competition in an exciting final tonight. If you want to join us watching, you can tune in at 20:00 CET on LRT HD if you’re in Lithuania, diaspora channel LRT Lituanica or our multi-stream platform. Good luck to all the entrants!