According to some Spanish media, Marta Sánchez was negotiating a possible Eurovision participation and she was expected to be officially presented in the coming days.

The Spanish singer has denied today all these rumours through her official page on Facebook, see a screen shot below: 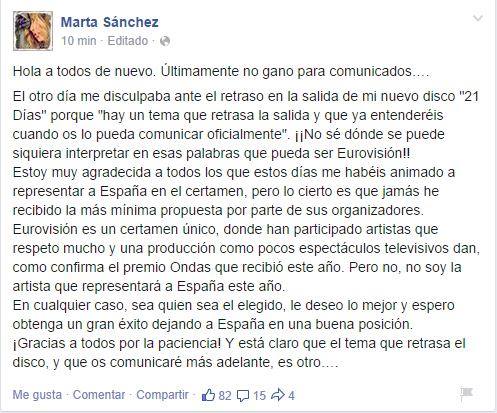 On this statement, the singer refers the post from which the Spanish media started speculating, Marta has explained she was talking about her upcoming album and nothing related to the Eurovision Song Contest. She is also thankful to the fans who have showed her their support the past days and she has stated none from TVE has asked her to represent Spain. Moreover, she adds Eurovision is an unique contest where very good professionals have taken part and which recently received the Spanish Ondas Award. Marta Sánchez finishes the statement wishing good luck to the Spanish participant for Eurovision 2015.

On the other hand, other rumours have become stronger than ever. As ESC+Plus reported earlier, Edurne could be one of the candidates and this has come clearer with the information revealed on the Spanish TV magazine “Cazamariposas”. The team of the programme has talked to Edurne’s manager who confirmed them the singer had sent a song to TVE and WANTS to represent Spain in Vienna.