What an amazing turn around we have seen for Saara Aalto during the competition in The X Factor UK. First of all she didn’t make it through the judges chairs round, instead being given a wildcard by her mentor Sharon Osbourne. Then during the live finals she ended up in the bottom 2 for the first two weeks. Let’s be honest, it didn’t look good for Saara … 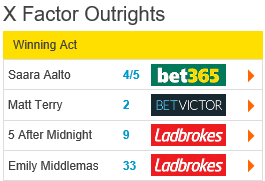 But now the tables have turned in favour of Saara Aalto winning the whole competition, she is the favourite in the betting odds to win the 13th series of The X Factor UK at an average of 4/5.

This weekend, saw the contestants take on Christmas Week; as well as taken on a Christmas classic, they were to sing the song that they thought would take them through to the Grand Final next weekend. Saara Aalto took on the worldwide classic hit of “All I Want For Christmas” by Mariah Carey – you really know its Christmas when you hear this one playing. Of her performance of the Mariah hit, the judges said:

Nicole Scherzinger: “I loved the medley you did at the beginning, the intro was beautiful. Beautiful vocals that reminded me of Kate Bush…. What’s so great with you what the difference is you put a smile on my face and in my heart with that performance”.

Simon Cowell: “You have one of the best personality that we have had on this show for a long time. Because every thing you do, you do it with  sense of fun and when you’re serious it’s great , then its fun. But it’s your competitive spirit which I like and you have had a massive turn around from the first live show to now and I can feel the audience behind you”.

Nicole Scherzinger: “This is the song that blew me again. And this song is the reason I asked you to be Mrs O’s wildcard.. you are unbelievable”

Simon Cowell: “It was sensational…. I admire people who fight … the arrangement was stunning”

For the two performances, she gained standing ovations from all the judges, and now if you liked the performances and want to see Saara in the Grand Final – make sure you vote for her via the official app. Remember you get 5 votes for free.

So now later on tonight, we will find out the results and will see if Saara can  make it to next weeks Grand Final. We are Esc+Plus have our fingers crossed for our Finnish princess.