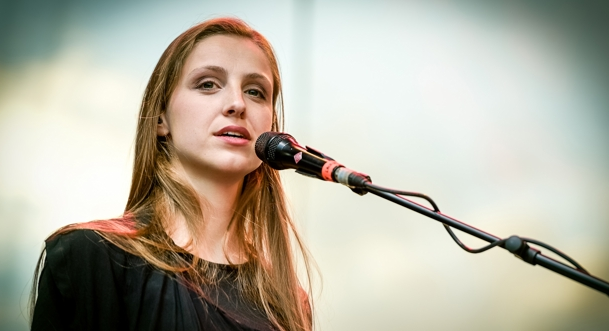 VRT has just revealed that Laura Groeseneken will represent Belgium at the Eurovision Song Contest 2018. This year the Flemish broadcaster has opted for an internal selection procedure to select their act for the European competition. The song Laura Groeseneken will perform in the contest will be premiered at a later date.

“I’m very happy that we can announce the news! It’s a big opportunity for me to represent Belgium at the Eurovision Song Contest. I’m very excited! The next step is to find the best song, which I will choose along with VRT. I’m looking forward to cooperating with the broadcaster and seeing the final result”, stated Laura.

Laura Groeseneken was born in 1990 and comes from Leuven. The singer-songwriter has already worked on several high-profile musical projects including the 50th-anniversary celebrations of the James Bond franchise, 007 In Concert. Since 2014 Laura has been performing with Ozark Henry and together they have appeared at some of Belgium’s biggest festivals, including Rock Werchter, which takes place in Belgium every July.

In addition to singing, Laura also plays the melodica and piano and alongside Alex Callier wrote the song Gravity for the Belgian group Hooverphonic. The song became known internationally when fashion label Cacharel used it for one of their perfume commercials.

As her day job, Laura works as a visual merchandiser for IKEA. Meanwhile, she is working on her solo career and writes her own songs under the name Sennek. She is also a vocal coach at the music centre Het Depot in the city of Leuven.

At home, music also holds an important place in Laura’s heart — the showpieces of her house are two Rhodes pianos. And, not surprising, Laura is a big fan of Scandinavian design and Belgian fashion.

VRT will be the broadcaster responsible for the Belgian participation at the Eurovision Song Contest 2018. As you may know, Belgium has two broadcasters in the competition which rotate every year, the Flemish broadcaster VRT and the French-speaking one RTBF.

RTBF has recently achieved outstanding results for Belgium at Eurovision, two-fourth places in 2015 and 2017. In 2016, VRT’s act Laura Tesoro reached an important tenth place in the Grand Final of Eurovision with the catchy tune ‘What’s the Pressure”. Will Belgium follow their recent success in the contest?

What do you think about the Belgian choice for Eurovision 2018? Let us know in comments!