The talented soprano Aimee Banks, who represented Ireland at Junior Eurovision 2015, is giving a debut concert today. The young singer will perform in the Galway Cathedral in aid of Laura Lynn Childrens Hospice, with very special guests, Tenor, Brendan Mc Carthy and the wonderful school choir of Scoil Mhuire, Moycullen. 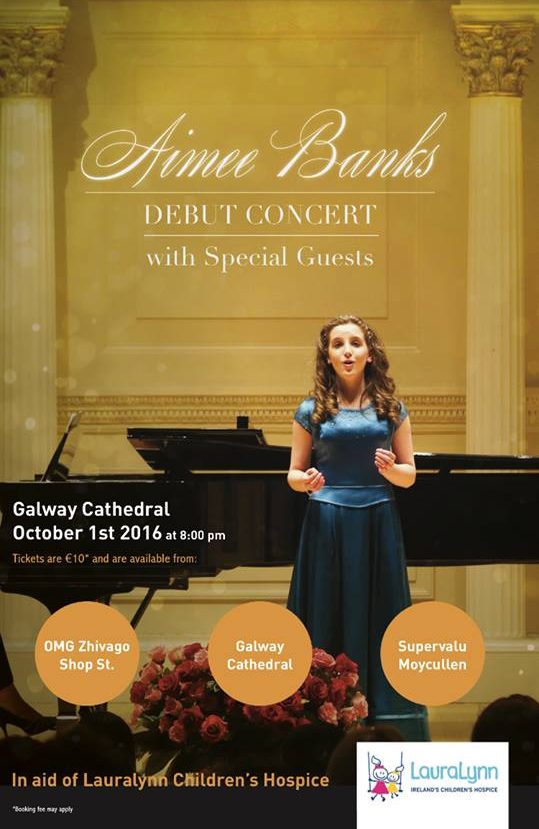 The 14-year old singer impressed everyone with her song “Réalta na Mara” representing Ireland at Junior Eurovision 2015, but, unfortunately, she only reached a 12th place in the competition:

After Junior Eurovision, she continued working with Michael Durham Brandt, her vocal coach, taking part in several events making some TV appearances on National and International television and radio like The Late Late show, Newstalk and Boston Radio.

A few days after the contest, Aimee had the honour of performing on the iconic stage of Carnegie Hall, New York, having won her first International title for operatic aria category of an International Vocal Competition. Her rendition of Handel’s Lascia ch’io Pianga earned her a special recognition award for performance of the night.

An award-wining vocalist she currently holds two International Vocal titles and received the Overall Jr Vocalist Award and Bursary from Feis Ceoil two years running, 2015 (Midlands) and 2016 (Sligo). She received an award for Outstanding Achievement in Arts and Culture 2016 from Galway Roscommon Education and Training Board and a High Achievers Award from The Royal Irish Academy of Music.

This year has been momentous for Aimee having performed on some of Ireland’s most impressive stages to include The National Concert Hall and The Convention Centre Dublin.

Aimee’s debut concert will take place today in the Galway Cathedral at 21.00 CET (20.00 local time) with the tickets available on the door.