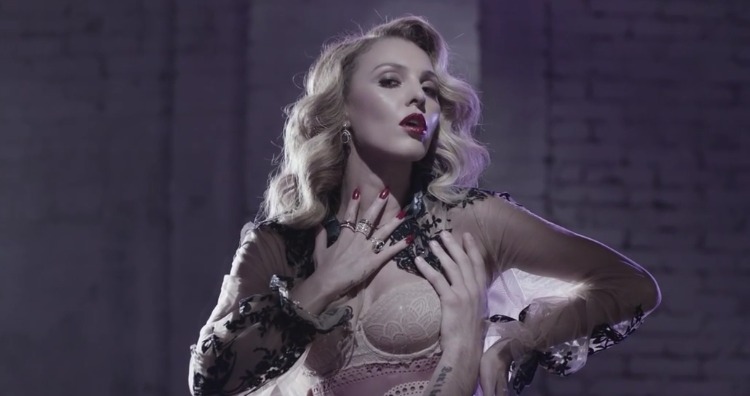 Tamta, the Greek-Georgian pop artist who was supposed to be one of the 5 names singing and entering this year’s Greek final ‘Eurosong 2015: A MAD Show‘ has released Unloved, the entry she attempted with when she did the submission for the national final to NERIT, early this year with Minos EMI as her backing record label. This one owns as well artists like Sakis Rouvas, Eleni Foureira or Evridiki. Sakis represented Greece in 2004 and 2007, Eleni participated at the Greek NF in 2010 and Evridiki went on the ESC stage for Cyprus in 2007.

Finally, negociations didn’t see the green light and the Georgian singer was replaced after the broadcaster dropped her off the competition. They picked Maria Elena Kyriakou instead, from the same record label, who eventually won the show and thus represented the country in Vienna, coming 19th.

The song is written by Alex Papaconstantinou, Rami Yacoub, Viktor Svensson, Albin Nedler and Kristoffer Fogelmark. Alex Papaconstantinou (Alex P.) and Victory have been in charge of the production and Bjorn Engelmann has been resposible for the mastering of the melody. The Executive Producers of this project are Elias Georgiadis and Ioannis Koutsaftakis.

Tamta has already released an official clip, lyric video and performed at ‘The Voice‘ in Greece.

The singer has been enjoying fame, name and recognition in both Cyprus and Greece , since she auditioned and was selected for the Greek version of the popular talent TV show, Idol, at the age of 22, where she came in 2nd place in the finals.

She is also mostly known to Eurovision fans because of her participation at the 2007 Greek NF performing With Love, where she placed third out of the three participants: Sarbel, Christos Dantis (who wrote Helena’s winning entry in 2005) and Tamta herself. Subsequently Sarbel won and went to the contest in Helsinki.

She has released 3 studio albums up to date and has worked with well known Greek songwriters and musicians, such as Nikos Terzis or Alex Papaconstinou, who is also one of the authors of Unloved and wrote many Eurovision songs and worked with artists such as Anna Vissi, Helena Paparizou, Antique, Sarbel, Ivi Adamou or Aysel & Arash. He also wrote Enrique Iglesias’ hit I Like How It Feels, Nicki Minaj’s Whip It and Jennifer Lopez’s Live It Up together with RedOne.

Tamta is currently one of the 4 members of ‘The X Factor‘ in Georgia.

Would you like to see Tamta representing Greece next year in Sweden? Do you think Greece could have taken the contest in Vienna with her and this song? Tell us your point of view on our social media channels or in a comment below and stay tuned!