Georgians – the people of ancient Sakartvelo. They may not be among the most famous and known people, but – as we all know – the real heroes always remain in the shadow. 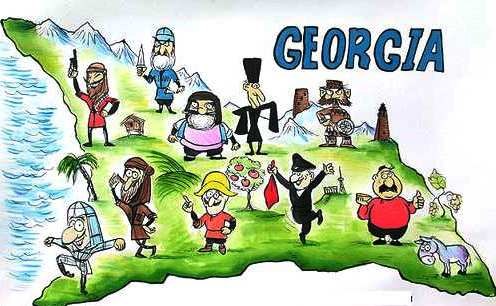 ქართველები (“kartvelebi”), as they call themselves in Georgian, are the descendants of ancient Colchians and Iberians. So their ancestors must be proud of them because, according to a top made by www.hubpages.com in 2013, Georgia is the 3rd friendliest country in the world. Once you get there, you will inevitably fall in love with the Georgians!

As you may have noticed, many Georgians’ second names end in -shvili or -dze and the most famous names are Giorgi and Nino.

The most famous Georgian man is probably Stalin (he is part of that 0.98% of unfriendly Georgians). He was born in Gori, from a Georgian father and an Ossetian mom.

Do you remember that lovely Greek story about Jason and the Argonauts? Well, it may not be so Greek at all. Medea, the wife of Jason, was the daughter of King Aeetes of Colchis, making her part of the remarkable Georgians.

The list may also include Saint Nino, Michael Saakashvili, former president of Ukraine, Petre Melikishvili, who discovered Glycacids or Shota Rustaveli, the national poet. But, perhaps the most loved among Georgians is Ilia II, the Patriarch of The Georgian Orthodox Church, who has baptised 19,000 children (it is a very high honour to be baptised by a patriarch in Georgia).

We should not forget our amazing winners from Georgia: Bzikebi, Candy and Mariam Mamadashvili. They are surely among the heroes of Georgia!