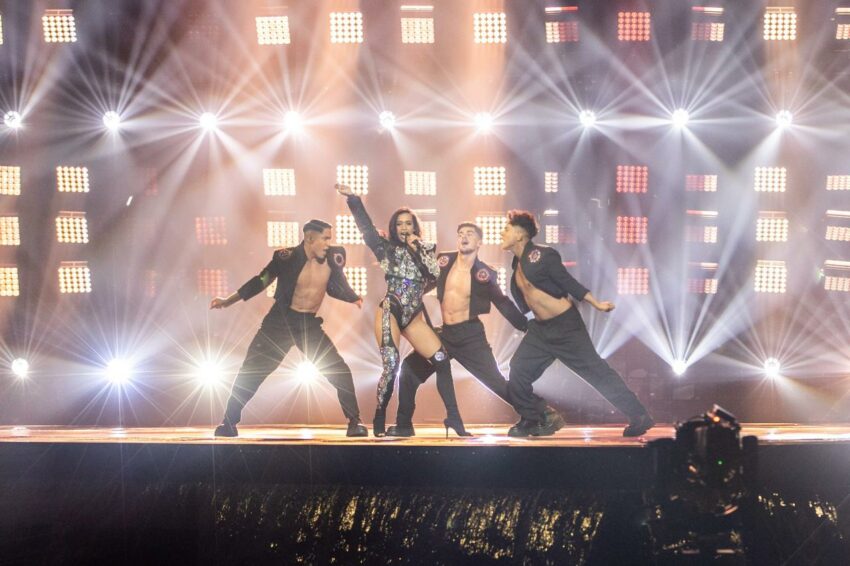 Today, May 8th 2022, the Big 5 had their second on-stage rehearsal, this means that we saw the following countries rehearse for a second time: France, Spain, United Kingdom, Germany, and Italy. Rehearsals for the Big 5 start later, since they do not have to qualify for the Grand Final.

Below you can find our opinion represented in a pro and a con about each performance, as to not make this article to text-heavy. Our opnion is based on what we could see on the screens in the press center in Turin, Italy. The people at home can see snippets of the performances, but the press can see the full rehearsal on-screen, but is not allowed to film the screen.

Pro: The song is colorful, and the staging, including the water that is cascades from the stage, make you feel in a Celtic jungle (if that is a thing?).

Con: The song is being compared by Ukrain’s Go_A “Shum”, but to beat this one you need a song that has a real build-up, which “Fulenn” kinds of lacks.

Con: There seems to be something missing for it to be a real Latin banger.

Pro: Sam is a very loveable man with a heart of gold and a voice that is made by the gods. The staging of this song is incredibly grand.

Con: Will everybody get the song, the act, and Sam?

Pro: Malik is a very likeable guy who can sing and rap, no doubt about that.

Con: The song might be a bit of a bore for some.

Pro: Both Mahmood and Blanco are the biggest music stars of Italy at the moment, and they can both sing.

Con: Both of them come across as very lackluster and they do really engage with the audience during their performance.

Of the Big 5 it is hard to tell who is going to do Ok, great, and excellent. We think the biggest surprises in barely getting any points will happen again, also amongst the Big 5. There remains this notion of when you immediately qualify for the Grand Final that you do not need all the points you can get or people simply do not agree that there are always 5 countries that do not need to qualify for the Grand Final first. Whatever the case might be, we think that one or more of the Big 5 countries will get a result that comes as a surprise, and we even dare to say that the winner might not be amongst the Big 5.

So, what do you think? We like to know your opinion.