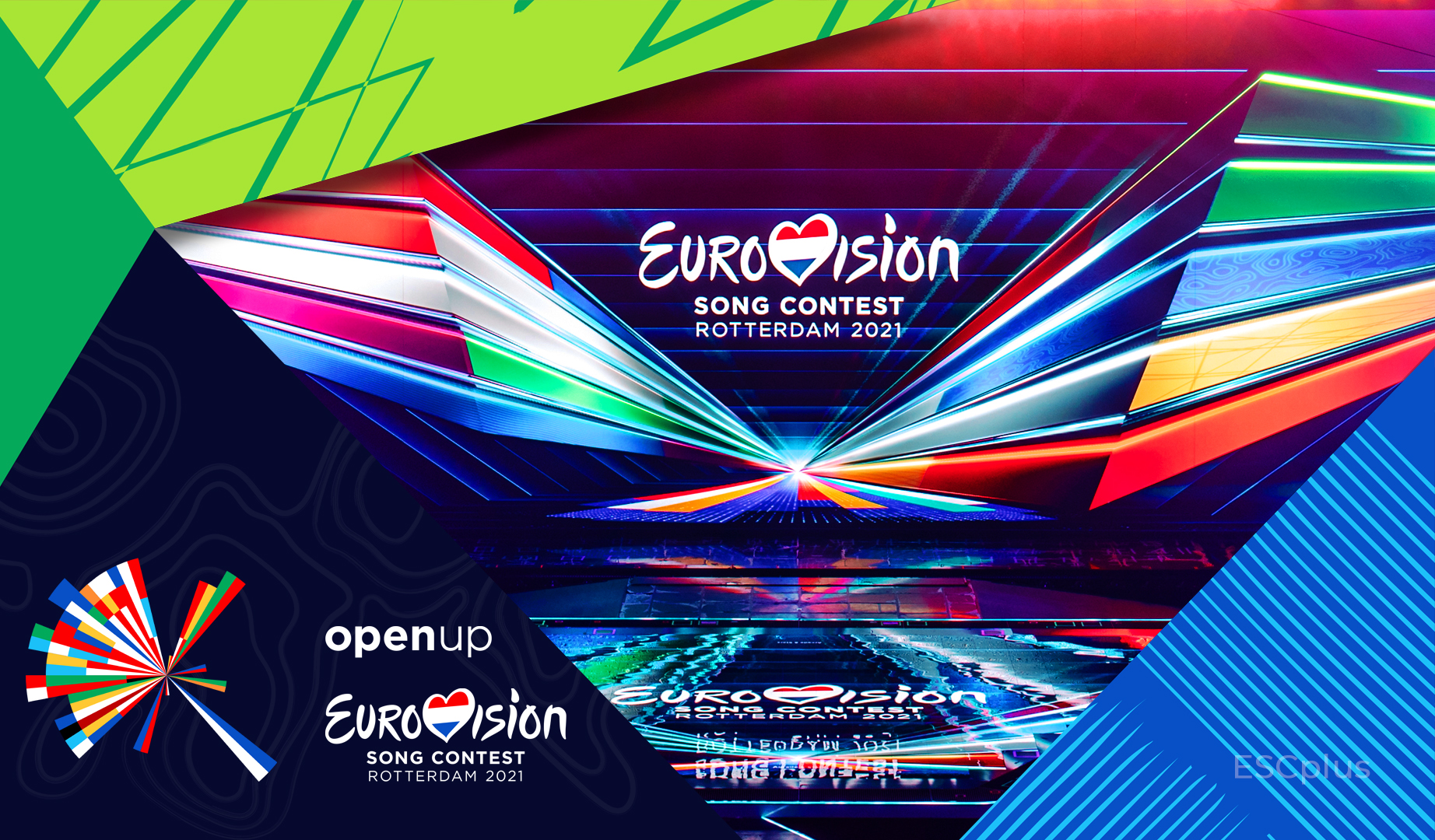 17 countries are going to battle it out in semi-final 2 to make it into the final of this year’s contest. So, get ready again to see the greatest songs, the most wonderful outfits, and the coolest interval acts in the Dutch city of Rotterdam, the Netherlands.

Semi-final 2 is an exciting one
Before rehearsals started the press and the fans said that the first semi-final of this contest would be the most difficult one to be in, but after seeing all the performances of semi-final 2 during the rehearsals people thought differently. The use of the huge LED screen and the acts in their own right are as least as difficult to progress from as last Tuesday’s show. So, get excited for this one!

With just some hours before the second semi-final of the Eurovision Song Contest 2021 starts, we already “Open Up” to semi-final 2 in this article.

Unfortunately Iceland will use the recorded rehearsal of the 13th of May 2021, due to one of the band members having tested positive for COVID-19. A real shame, since the Icelandic Daði og Gagnamagnið was also selected in 2020 with another song, and now that he has his chance during this year’s contest, COVID-19 is here to ruin things again. Nevertheless, we hope that Iceland will progress to the Grand Final, because this song is a marvel, and a bop you cannot get out of your head.

In the second semi-final of this year’s contest no more than five countries chose to send another song than during 2020’s cancelled edition of the contest. These countries are Poland, Albania, Portugal, Finland, and Denmark. The rest of the artists were also chosen for 2020’s contest, but only needed new songs in order for these acts to proceed to the semi-finals of 2021. In the press room, and during interviews with the competing artists, you notice that most of them have been waiting for this opportunity for a long time. They are able to show themselves on the grant Eurovision stage, and tonight they will during a fully corona-proof second semi-final of 2021. This live show will have a live audience of 3,500 spectators, as well as Tuesday’s show, and the Grand Final on Saturday.

Presentation of the Big 5
In the second semi-final we will also see more of the Big 5, three of them will be presented during this live show, and they will also vote along with the other 17 countries that compete. The Big 5 countries that can vote during the second semi-final tonight are France, Spain, and United Kindgom. Of France we are going to see a snippet from contestant Barbara Pravi’s song “Voilà”, from Spain we are going to see Blas Cantó with his song “Voy a quedarme”, and from the United Kingdom we get to see more of James Newman’s “Embers”.  The snippets of these songs were filmed during last night’s dress rehearsal, and the full performance will be uploaded on the official Eurovision YouTube channel.

Once again we will meet the Dutch presenters of this year, which are: Chantal Janzen (presenter and musical star), Jan Smit (singer), Edsilia Rombley (presenter, singer, and Eurovision contestant of 1998 and 2007), Nikkie de Jager a.k.a. Nikkie Tutorials (YouTube star, make-up artist). All of them got a specific role, Chantal and Jan are the presenters who introduce the songs, interval acts, and other insights during this year’s show. Edsilia is out and about in the green room, and Nikkie knows her way around the internet, and makes sure that the audience stays updated on all things Eurovision going on online.

Chantal was born in 1979 in the Dutch village Tegelen, and studied at the Amsterdam University of the Arts. She rose to stardom as an actress in the musicals Tarzan, Petticoat and Hij gelooft in mij (trans. “He Believes in Me”), and has hosted shows such as “Holland’s Got Talent” and “The Voice of Holland”. Next to this, she has won the Dutch Televizier-Ster Award for Best Television Presenter no less than a whopping 5 times.

Edsilia was born in 1978, and is a well-known face among the Eurofan community because she represented the Netherlands on two occasions during the Eurovision Song Contest. In 1998 with the song “Hemel en Aarde”, with which she ended on a respectable 4th place, and in 2007 with the song “On Top of the World ”, with which she failed to move on to the grand final. Nowadays, Edsilia is becoming more and more a presenters on Dutch television.

Jan Smit was born in 1985 in the famous Dutch fishermen village Volendam. He had his first success at age 10. In 2005, his reality show “Gewoon” (trans. “Just Because”) won the Televizier-Ring Award, the most prestigious Dutch TV awards. Ever since 2012 he has hosted the AVROTROS show “Beste Zangers” (trans. “The Best Singers”). Jan is also a member of the well-known Dutch live performers “De Toppers”, and the German band “KLUBBB3”. As a singer, Jan is not only known in the Netherlands, but also in Belgium, Germany, Austria and Switzerland. He is the most successful Dutch artist in Germany, reaching 12 million viewers with shows like: Schlagerchampions, Die Hüttenparty and Schlagerboom.

Last, but certainly not least, we have Nikkie de Jager as a presenter. Nikkie became world-famous on social media as her alter-ego Make-up Artist “Nikkie Tutorials”. Because of this she was able to make it into Hollywood, applying make-up to the faces of world-famous celebrities, like Kim Kardashian, and several well-known stars in music, acting, and many more genres of stardom. Next to this, she shot to world fame by being invited to the American talk-show “Ellen”, where she was interviewed by Ellen Degeneres. Furthermore, she is known for coming-out in one of her social media videos as transgender, making her an advocate for the LGBTQA+ community all over the world.

We have seen the semi-final a couple of times now, so we know what is going to be in there, and let us tell you, it is pretty exciting!

The show starts of on a high-note, because after the intro in which the LED houses, which are this year’s theme, we are guided back to the Rotterdam Ahoy arena, where we are treated to a dance performance by a break dancer Redouan Ait Chit, and a specially written song by Dutch singer Eefje de Visser. Redouan is handicapped, but turned a negative into a positive, and started breakdancing from an early age. Eefje de Visser has won many prizes already in the Netherlands, and is this year’s hottest Dutch indie artist.

Of course the 4 Dutch presenters make a big entrance, with fireworks and everything. Especially presenter Nikkie de Jager or “NikkieTutorials” as many might know her is this year’s discovery. Her American English is flawless, and she looks absolutely amazing. Next to her, Chantal Janzen is doing really well, looking stunning and coming across as very approachable.

Then we move on to the 17 songs which are in the second semi-final of the Eurovision Song Contest 2021. The full list and the order that they are going to be presented in you can find on top of this page.

The first interval act is with dancer Ahmad Joudeh, and stunt cyclist Dez Maarsen. While Ahmad does some great Middle-Eastern dancing, Dez drives around him, doing all sorts of epic bike stunts.

The second interval act focuses on the past winners of the song contest, and how the contest has changed their lives. This part is actually quite an emotional one. It is very moving.

We also get to see snippets of the performance of three out of the Big 5 countries, in this case France, Spain, and the United Kingdom. These countries also get a chance to vote during this second semi-final.

…and then we move on to which country is going to the Grand Final on Saturday!

Which countries are your favourites of semi-final 2?

One thought on “Eurovision 2021: Semi-final 2 is happening tonight! Read ESCplus’ predictions and insights”