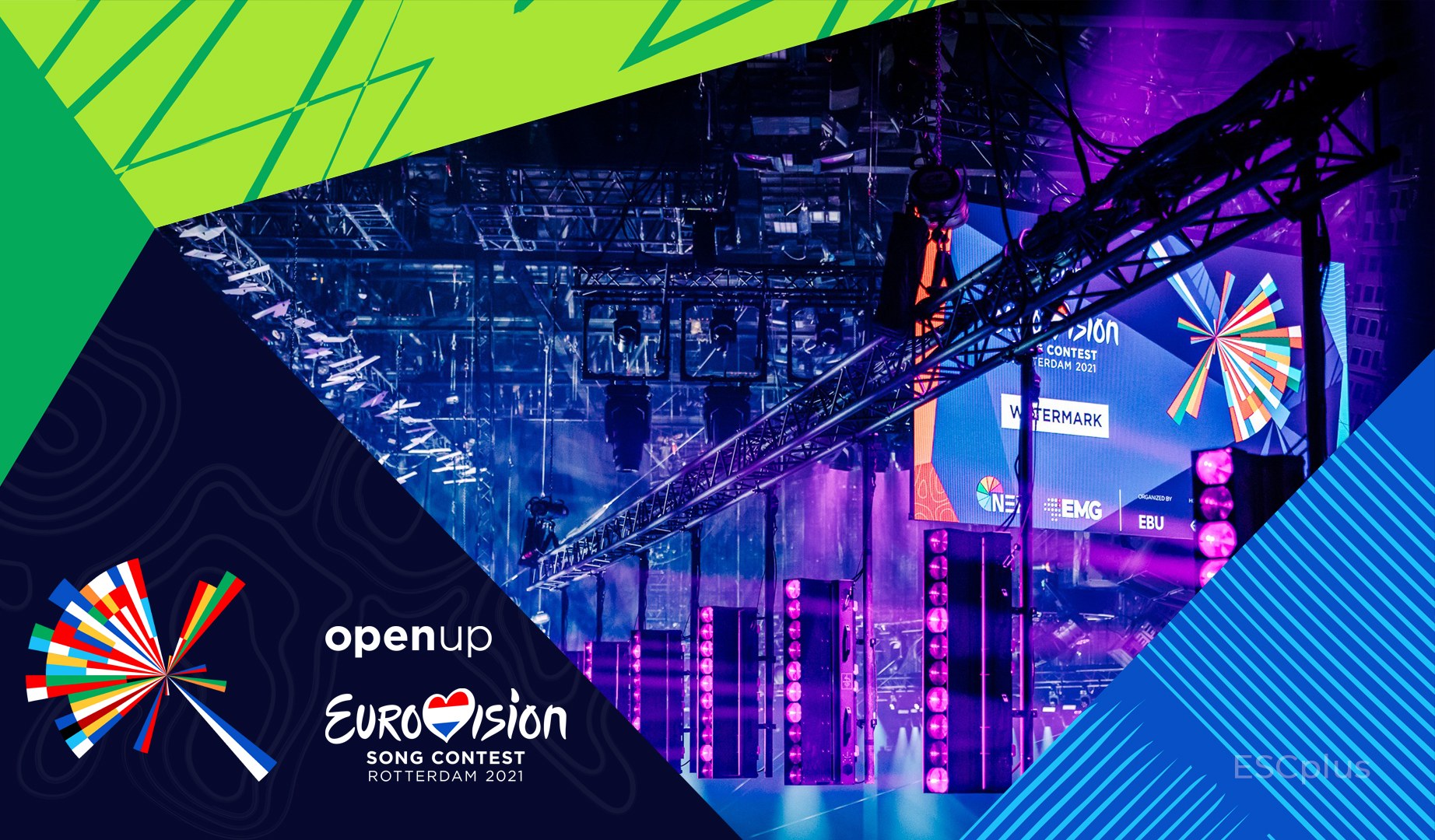 Last week was a week of rehearsals for all delegations of the Eurovision Song Contest 2021 in the Dutch city of Rotterdam. Based on the buzz in the press center, we came up with a list of which entries that perform in semi-final 2 are moving on to the final. Below you can find the entries we think are sure to qualify, may qualify, and do not stand a chance to qualify of semi-final 2.

San Marino’s presence in the final of 2019 was a surprise, because the song “Say Na Na Na” of Serhat was quite out there. This year the little state of San Marino is going all out, they even bring the American rapper Flo Rida (known from the song “Blow My Whistle”) to the stage. During the rehearsals Flo Rida was nowhere to be seen, but we are sure that this is because of a time is money kind of thing. Senhit’s song “Adrenalina” is a hit song, and should get airplay, even when it does not win the final.

Greece is entering the competition with a very young singer, Stefania, who is 18 years of age, with a huge song called “Last Dance”, and an enormous performance. In the Rotterdam Ahoy people will only see green screens, but at home you see a whole virtual world in which Stefania moves and sings fantastically. The song reminds us of “Physical” by Dua Lipa, and we are sure that Stefania could have the same kind of career. We do not worry about Greece being in the final.

The Icelandic entry is all about having fun, and the song reminds us of the ‘80’s. The song, the visuals, and the band in the most comfortable clothes we have seen during this year’s contest, it all comes together in this performance. There is no doubt in our mind that Iceland will qualify, and if it was up to us, they can win the whole thing. This song, once it is heard, it can never be unheard, and that is a great thing in this case.

Serbia sends the female group Hurricane to the Eurovision Song Contest 2021. This song is so full of energy that it might make you go “Loco Loco” yourself. These three ladies have energy, powerful voices, look like the Dutch entry of 2017 O’G3ne got all sexy, and have come up with a great song. Hurricane just deserves to be in the final.

Portugal: The Black Mamba – Time is on my Side

The Black Mamba from Portugal are in a league of their own. The song of this Portuguese band is so laid-back, and because of that so cool, that they will move on to the grand final easily. It is the Portuguese Salvador Sobral effect of this song. The song is about a woman the band met in Amsterdam. She did not have long to live anymore, but was glad with the time that was still given to her. Yes, we are a fan! Go Black Mamba! Go Portugal!

This song is also a hot favorite to win this year’s contest. He was on top of the polls for weeks on end, but dropped when audiences saw the live version during rehearsals. Because the song “Tout l’Univers” was written by the same team as Duncan Laurence’s winning song, they could not sing the song in English or perform with just a piano, so the Swiss came up with a very artistic performance. It might not be to everyone’s taste, which also means that this song dropped a little with the bookmakers to a respectable 7th place.

This Finnish entry will qualify, simply because it is very Finnish to send a rock song, and because it is a very un-Eurovision Song Contest kind of song. Finland is rebellious again, and we love it. This song might not be everyone’s cup of tea, but Finland does what it does best. They once sent the satanic rock band Lordi, and they want to give that strategy a go again. Will this song win the final? Absolutely not, but still a cool entry.

Bulgaria: Victoria – Growing Up is Getting Old

This song of Victoria from Bulgaria is so sweet and full of atmosphere. “Growing Up is Getting Old” is about growing up, but that it is not always great. You win some you lose some, but life is still great to live. The way this song is performed on-stage is with so much atmosphere. It is sung on a rock which appears on stage, and Victoria is holding a picture of her and her dad, reminiscing about how life has changed. Like a lullaby, and therefore the ninja nobody saw coming of this year’s contest. Be aware, because Bulgaria might be closing in to win the contest.

The energetic Benny Cristo might proceed to the final with his song “Omaga”, but we are not sure. People might not find it up to par with very current songs that are in the hitlists right now. The song and the performance are not necessarily the problem, but sometimes Benny’s singing is not really all there, and that is worrisome.

The performance and the song are not the problem for Natalia Gordienko from Moldova, but the fact that this song is performed so perfectly, and almost not human because of it, might be an actual problem. Yes, Natalia can sing, and she will even perform the longest note in Eurovision history (17 seconds), after doing a whole dance routine. We do not know, this performance is up in the air. We do like the song though. The chorus makes you wan to get some “SUGAR”.

Poland had some COVID-19 related problems this week, which was very unfortunate, especially when it comes down to their rehearsals. The song has a great ‘80’s vibe, but the dance routine wears the singer Rafal out, and because of that his singing gets progressively worse during his performance. We do like an ‘80’s bop, but does the rest of Europe do too?

Anxhela Peristeri looks beautiful on-stage, and she has upgraded her performance from the preview video. Her song is the problem here, because it is not catchy, there seems not to be a real chorus, and she does not convey the fun of actually being on the Eurovision stage. Her voice is not a problem though. We are not sure about this one, this song can do well in this semi-final or Albania’s plans go totally sideways.

Another song that draws from the ‘80’s. The fun and cool-looking guys of Fyr og Flamme are absolute goofballs, and we love them for it. Their song “Øve Os På Hinanden”, sung in Danish is easy to the ears, and you can remember it remarkably well. Not sure though whether it is for everybody, and because it is sung in Danish whether everybody can relate or connect to it. We honestly do not know whether this song will proceed to the final. Could be…

Estonia: Uku Suviste – The Lucky One

Estonia’s singer Uku Suviste might pass because of his good looks, but his song feels weathered, and not current at all. He is a charmer though, and the way his song is performed on-stage could make him move on to the finals, but that could also easily not be the case. This song’s future is very uncertain on this year’s Eurovision stage.

Do not stand a chance to qualify

This song is not awful or sung really bad, but it is just not one that sticks. The same can be said over his presence here during the rehearsals, nobody really noticed that Vincent Bueno was even here. We are quite certain that this song might not make it into the final, because there is simply nothing really memorable about it.

Let’s be honest, Tornike Kipiani, you are not in it to win it, but just to be present during the contest? This song is so not memorable that we need to ask ourselves why it is even in this year’s contest. Come one, Tornike, you had 1.5 year to prepare, and the song “You” is all you came up with? Well, whatever…

Singer Samanta Tina already does not have the most approachable face, which makes her kind of an enigma. She tried her best during the press conferences to look lively and fun, but that did not really work. The song “The Moon is rising” is just a really angry song, and the way it is staged is with a lot of rage, is almost unbecoming. This song starts with the sentences: “The queen of the night is coming. The blood moon is rising”, and you get really scared scared from there…

Now we like to know what you think as a fan!
Who is moving on to the grand final on Saturday from what you have seen of the rehearsals?