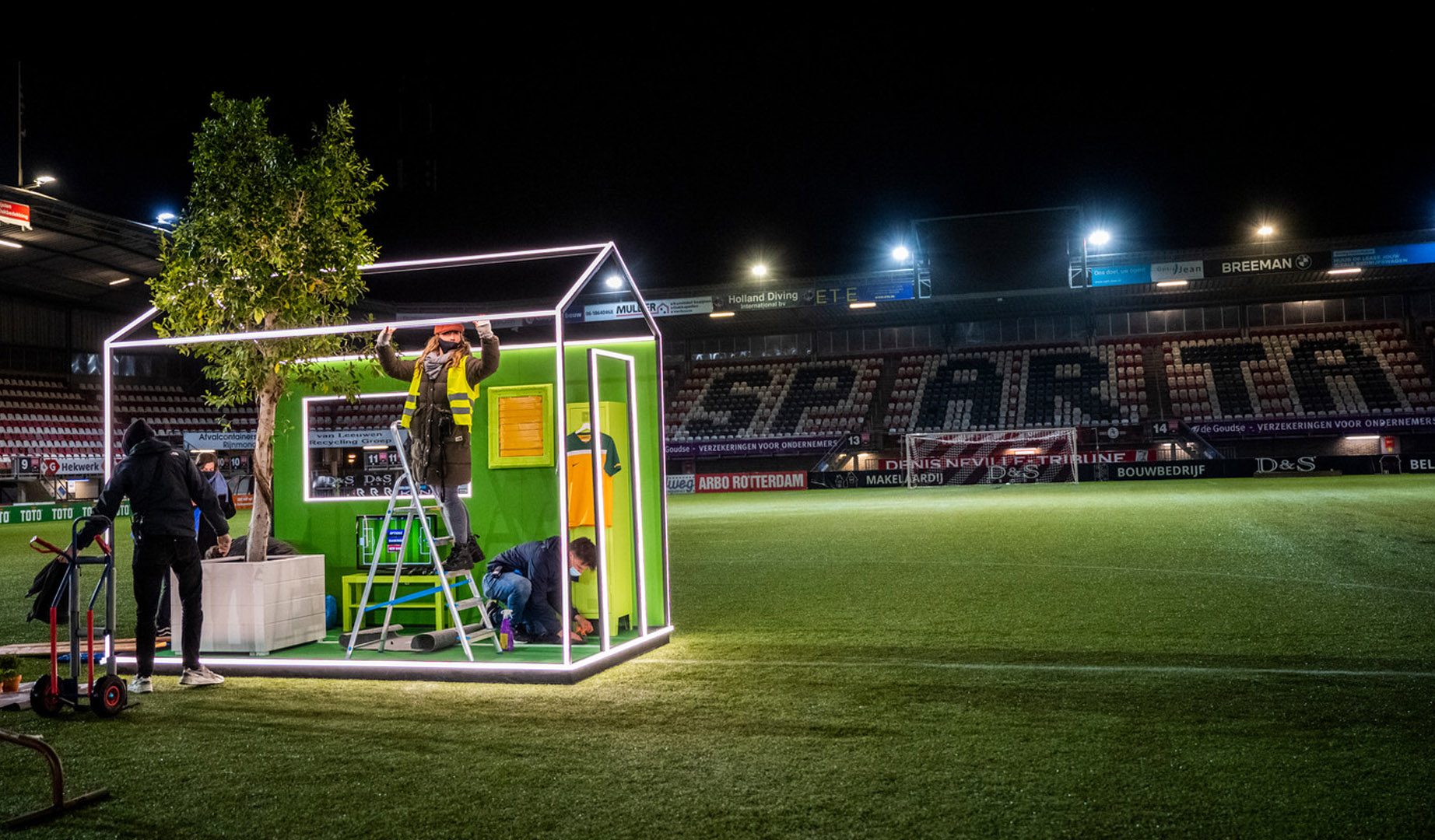 It seems like Australian singer Montaigne is really kicking a soccer ball on the grounds of “Het Kasteel”, which translates as “The Castle”, in Rotterdam-West. Montaigne kicks the ball out of a small house that is lit by the arena lights of Rotterdam’s soccer team Sparta. Montaigne is not present during the shoot, but she is there as a 3D hologram, since due to the corona crisis it is impossible for the Dutch organization of the Eurovision Song Contest 2021 to travel abroad. Advanced technology will be a big part of the 2021 music event in Ahoy Rotterdam upcoming May.

“At the beginning of 2020 we were fully prepared, and we had put all organizational parts in place. The international artists would come to the Netherlands, and together with them we would shoot some really great postcard videos on special places in the Netherlands. When the 2020 Contest was cancelled we had to go back to the drawing board to come up with new ideas. This time around we chose 40 locations, and not 41, since Armenia chose to withdraw this year. One of those places is The Castle, a legendary Dutch soccer arena. We have shot for hours, to eventually come up with 40 seconds of footage that will be shown before every song”, says Gerben Bakker, Head of Show.

Australia’s Montaigne is a soccer fan

“Montaigne is of course a singer, but she is also a huge soccer fan. It is one of her biggest passions. So, for Australia’s representative this year we want to show that sporty side of her, and The Castle is one of those benchmarks in Rotterdam that represents this as no other. The atmosphere of this specific soccer arena breathes history, because of the legendary Dutch and international tournaments that have been battled out here. We start with a shot made by a drone, and we end with a shot that is filmed by a drone”, Gerben Bakkers adds.

Light at the end of the tunnel

“The ball Montaigne kicks is as a mark on the horizon, the light at the end of the tunnel”, Gerben Bakker continues, “finding the right tone for the postcards was key this year, because we already live in dyer times for about a year now. Many steps towards a better future are being made, especially when it comes down to testing and vaccinating. That is why “hope” and “connecting people” will be the common factors that connect all postcards during the Song Contest of 2021. Enjoying an event like this together is just wonderful, even without a large-scale audience during the live shows in Ahoy Rotterdam. A sold out venue during these times would be great, but for now it is wishful thinking.”

Rotterdam will be the center of attention

“Corona might have cancelled the Eurovision Song Contest of 2020, and there will be no festivities in the city of Rotterdam during this year’s Contest, nor a chock-full Eurovision Village, but be prepared Europe, and beyond, because the Dutch city of Rotterdam will be the center of attention during 2021’s Eurovision week. The world will not forget about this historical Dutch city, and every shot filmed will be one that will get embedded in Eurovision history”, promises Gerben Bakker.