Tonight, we will finally know who will emerge victorious in Eurovision 2019 in Tel Aviv. We take a last look at the odds the ESCplus odds have indicated and try to deconstruct some possible outcomes.

Win or lose, the Netherlands have reached the favorite status and maintained it for the length of the pre-show run-up.  The Netherlands were favorite to win Eurovision 2019 at least two months ago, in both the betting odds and the ESCplus odds.

Something that is easy to forget is that even with frontrunner status, it still may be more likely for the Netherlands to lose than for it to win. With betting odds placing the probability just around even – it’s essentially a coin flip. This sounds great when there are 26 potential outcomes and you’re the most likely winner – but would we be surprised if we bet on heads and the flip of a coin gave us tails?

At this point – that is what is keeping this interesting – the idea that there is STILL a chance that the Netherlands will not win Eurovision 2019 – and if that happens – it should not be considered a huge upset.  Here are some scenarios which could fulfill this premise:

Australia soars high – Kate does ok with the jury, but is still a bit behind Duncan as we get to the televote – but the oddsmakers have underestimated the short attention span of the average viewer and while Duncan brings home a strong position in the televote – the run of 25th and the soaring through the air makes it feel unfair to hand the crown to a man sitting at a piano to the average voter.

Sweden is Sweden – the jury vote comes in solid as always and John brings home the televote in a way that that Sweden missed in 2018.  He remains even with Duncan during the revelation of the jury vote and it’s a squeaker until the end – but the public prefers him to Duncan and Sweden have a historic victory on their hands.

Italy invigorates the non-voters – for months we’ve read about how Spotify streams have been dominated by Mahmood. Italy delivers a competent top 3 jury result – but the surprise comes in the televote where Mahmood electrifies the fans who feel like their genre of music has been underrepresented at Eurovision and is able to overtake the two in front of him with his televoting score and stays there even after the jury winner’s televote is announced.

France uses a double prong approach to landslide the televote – Bilal looked dead in the water at Destination Eurovision before his televotes were accounted for and then pulled unthinkable numbers when they were revealed.  What if Bilal’s messaging is wide enough to both tap into a fanbase that has not discovered him yet and at the same time – motivate his thousands of already social media followers.

Switzerland capitalizes on the justice for Fuego vote – the odds underestimate the Eleni following that demand a dance song come through a year after her settling for runner-up to Netta.  Eleni’s appearance in the interval helps remind those that thought the fix was in for Israel to take the crown in 2018 and vote Switzerland in mass numbers.

Iceland really does bring down capitalism – What if Iceland were to benefit from a third party cyber attack – Voter fraud is alive and well in the world and many probabilistic models contemplate the outcome of cyber attacks influencing the outcome of popular elections. Could some of the anti-capitalist forces within Hatari’s following hack the EBU voting data and show an Icelandic victory with just enough power to topple the popular vote but not decree an outright fraud?  After all the jury voted for it in the top 10…

A last look at our odds as I remind myself that although we have a clear frontrunner – the actual odds of the alternative outcomes are well within the mathematical chances of an ordinary occurrence: 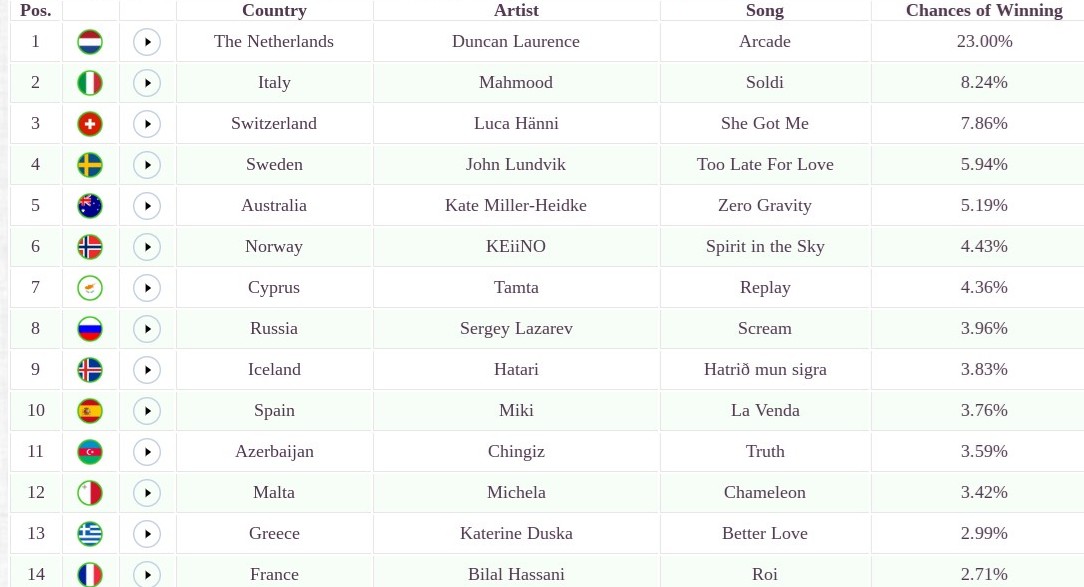 What do you think? What narrative do you see emerging as the votes are revealed tonight? Let us know in the comments

Some months ago, ESCplus launched a real-time prediction tool where you can see the chances in real time a country had to win the contest or to get to the final.

This exclusive tool gathers results from different sources, such as betting odds, views, users reactions and potential comments to calculate the chance of winning of all 41 participating countries.

The percentages are still being shown in real time for the Grand Final, so stay tuned!