There you go, the first Eurovision entry of the season has been chosen this evening. After two semi-finals and the grand final this weekend, the 54th edition of Festivali I Këngës has just come to an end in Albania, thus no other than Eneda Tarifa has taken the trophy and will represent Albania in Stockholm with his/her entry ”Përrallë” (Fairytale), which will be most likely revamped as usual. The song is written by Olsa Toqi. The winning act was picked by a panel of experts live at Pallati I Kongreseve in Tirana.

The results from tonight’s show look as it follows: 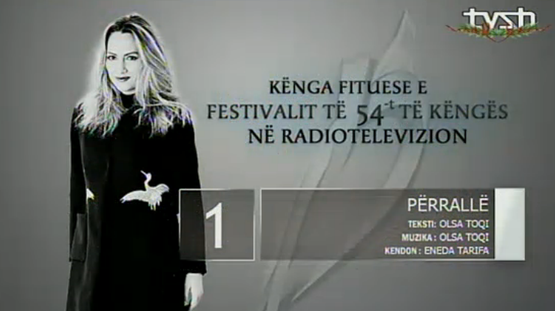 Do you agree with the winner? How do you think the song will place in Stockholm? It is yet to be decide whether Albania will enter the first or the second semi-final of the contest. The allocation draw will take place mid-January.

Last year, Elhaida Dani won FiK 53 with ”Diell” (Sun) but some troubles with the author took the song away from the race in Vienna and the song ”I’m Alive”, penned by Zzap’n’Chriss together with Sokol Marsi, was performed on stage, eventually ranking 17th in the grand final, with 34 points.