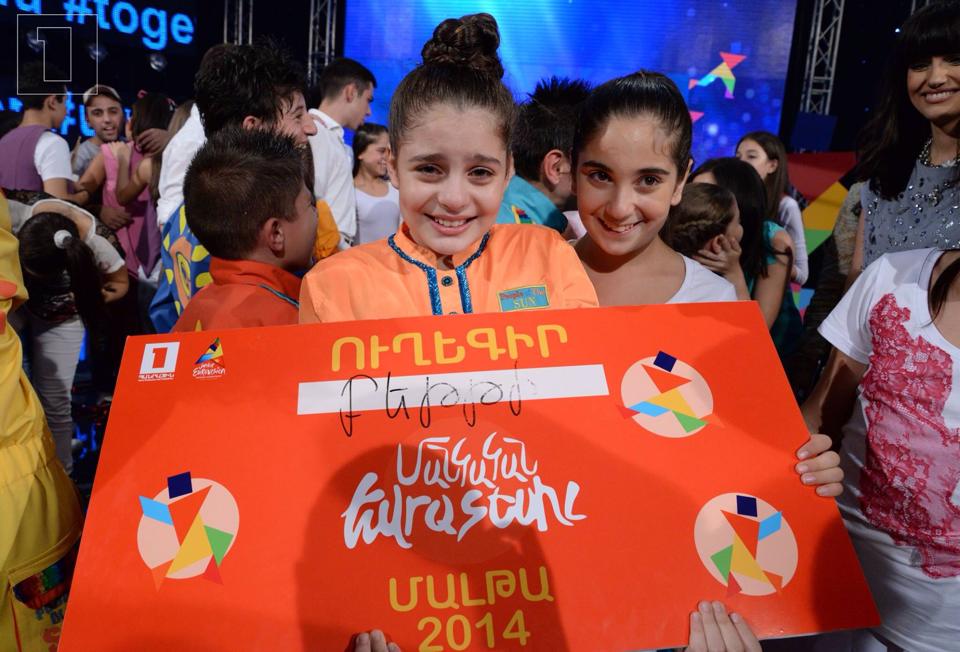 The Armenian final for Junior Eurovision has just ended and we have a winner!

Betty (Elizabeth Danielyan) with her song “People of the Sun” will represent Armenia on November 15 in Malta. The winner has been selected during a show were 10 candidates have performed their songs live in the ARMTV studios:

A mix of public televote and professional jury has decided the winner during a 2-hour show conducted by the Armenian Head of Delegation Gohar Gasparyan.

Elizabeth Danielyan was born on March 7, 2003. Her birth was the greatest gift for her mother on women’s international holiday. Being an active and musical child, she has been attending State Chorographical School since the age of 4 and simultaneously attended college. She has been going to School N.8 named after A.Pushkin since the age of 6 where she has had excellent progress up to present days. Today, Little Elizabeth is 11 years old. She dances in “Nane” dance studio.

Simultaneously, Elizabeth attends the National Aesthetical Centre named after Henrik Igityan. She studies embroidery, origami and drawing.
Since August 2012 Betty has been hosting “The Magnificent Seven with Elizabeth” on “Kentron” TV and “Alone at home” TV programs on “H2” TV. Betty has already had experience in hosting from TV broadcasting since her early age for she had often many appearances in “Hayrenik” TV channel broadcasting.
Betty very often received international offers but for various reasons all the invitations were rejected. But she made her first great step towards the television sphere after she had rejected to perform the song in Moscow. The invitation was rejected for some reason or other. Seeing Betty’s suppressed emotional state her father determined to meet her child half way by allowing her to accept the invitations of TV companies. Elizabeth is fond of hosting TV broadcasts and events endowed with knowledge, intellect, taste and quality.

The year 2012 was an abundant year for Betty not only in terms of TV broadcasting, but also concerts. As a guest she also participated in “Junior New Wave” international contest. In the spring of 2012 she participated in children’s Sports Olympiad held in Antalya. She brought 4 medals to Armenia by winning her opponents in mini golf, dart and jenga contest games.

In 2012 Betty was awarded with Title “Princess of the Planet” and Diploma “The Best Hostess” at the same event.
You can follow Betty’s upcoming victories and professional progress by frequently visiting her personal webpage.
– See more at: http://elizabetty.me/

What do you think about the Armenian choice for Junior Eurovision 2014?