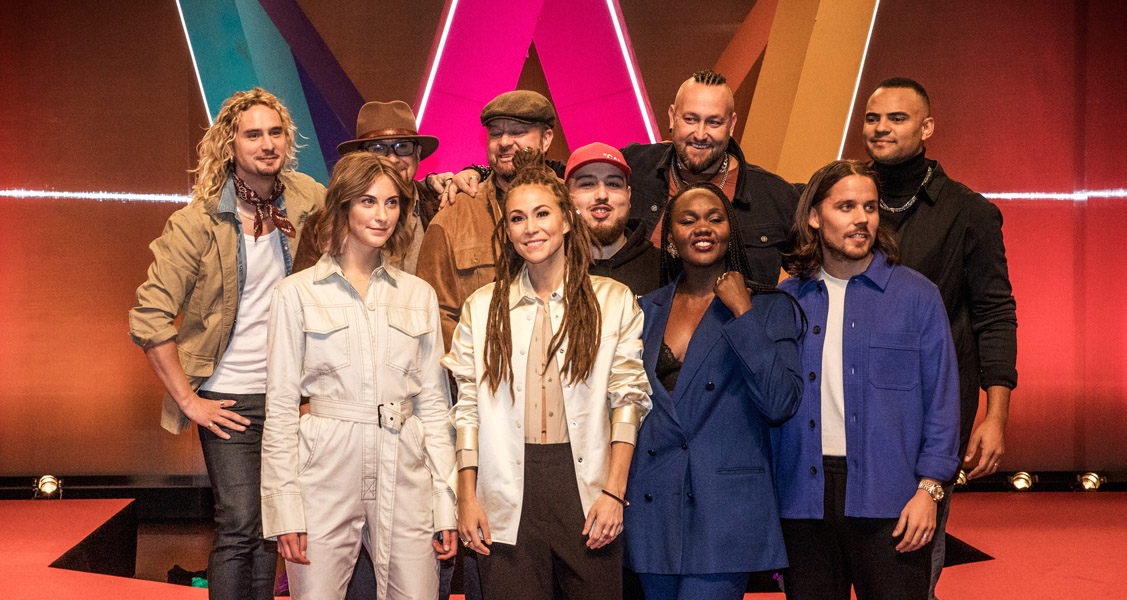 The show will be broadcast live from Luleå at 20:00 CET. Below you will find all the necessary information regarding tonight’s semi-final. Hosts, artists, running order, backing vocalists and more!

1. Mariette – “Shout It Out”
Text & music: Thomas G:son, Cassandra Ströberg, Alex Shield, Mariette Hansson
After taking part in Idol in 2009 and finishing 4th, Mariette made her debut in Melodifestivalen in 2015 with “Don’t Stop Believing”. She took part in Sweden’s national final 3 times and she made it directly to the final every time. This year marks Mariette’s fourth participation in Melodifestivalen.
Backing vocalists of the number (off stage): Emelie Fjällström, Dea Norberg and Cassandra Ströberg
Dancers: –
Choreographers and performance creators: Lotta Furebäck, Sacha Jean-Baptiste and Julius Hayes

2. Albin Johnsén – “Livet Börjar Nu”
Text & music: Robin Stjernberg, Albin Johnsén and Gino Yonan
Albin made his breakthrough with the song “Din Soldat” in 2014, which he performed with Kristin Amparo. He has previously participated in Melodifestivalen twice, the first time as songwriter in 2015 and the second as both artist and songwriter in 2016. In 2017 he made the women’s national soccer team’s European song “Hjärtan Av Guld”.
Backing vocalists of the number (off stage): Mattias Andréasson
Dancers: Edin Jusuframic, Lamin Holmén, Keisha von Arnold and Lisa Arnold
Choreographers and performance creators: John Arthur, Sacha Jean-Baptiste and Lotta Furebäck

4. Amanda Aasa – “Late”
Text & music: Amanda Aasa, Siri Jansson, Erik Grahn and Alex Shield
Amanda was in the final of P4 Nästa. She didn’t win the entire competition, but won the spot in the Melodifestivalen, which is usually awarded to one of the final acts. In 2014 she signed a record contract after a brief participation in Idol 2014 and released the debut single “Wrong Chemistry”. She has been the opening act for Miss Li and Den Svenska Björnstammen, among others.
Backing vocalists of the number (off stage): Erik Grahn and Ebba Carlberg
Dancers: Keisha von Arnold and Lisa Arnold
Choreographers and performance creators: Sacha Jean-Baptiste and Lotta Furebäck

5. Anis Don Demina – “Vem E Som Oss”
Text & music: Anderz Wrethov, Johanna Elkesdotter Wrethov, Anis Don Demina, Robin Svensk
Anis Don Demina is a DJ, singer and youtuber with over 400,000 subscribers. He has released a number of songs, including “On My Mind” and “Wasted”. In 2019 he was the voice of one of the hyenas in the Lion King. Now he will stand for the first time as a solo artist on the stage of Melodfestivalen. He has previously played the sax in Samir & Viktor’s “Suffla” in 2018 and last year he participated together with Zeana and the song “Mina Bränder” which failed to qualify.
Backing vocalists of the number (off stage): Lars Säfsund and Emelie Fjällström
Dancers: Edin Jusuframic, Lamin Holmén, Keisha von Arnold and Lisa Arnold
Choreographers and performance creators: Thomas Benstem, Lotta Furebäck and Sacha Jean-Baptiste

5. Faith Kakembo – “Crying Rivers”
Text & music: Jörgen Elofsson, Liz Rodrigues
Faith started singing in various church choirs. In summer 2019 she qualified for the final of P4 Nästa after winning the local competition in Jönköping. In the final, the nurse anesthetist from Jönköping finished in the third place. She describes her style as a mix of soul, gospel and jazz and has Whitney Houston and Lauren Hill as her role models.
Backing vocalists of the number (off stage): –
Dancers: –
Choreographers and performance creators: Lotta Furebäck and Sacha Jean-Baptiste

7. Mohombi – “Winners”
Text & music: Jimmy Jansson, Mohombi, Palle Hammarlund
Mohombi is a well-known name in many parts of the world. Not because he competed in Melodifestivalen 2005, but for his work from the beginning of the 2010s, when he had hits like “Bumpy Ride” from world-known producer RedOne. In 2016, he won an American Grammy in the category “Best Latin, Rock, Urban or Alternative Album” for his participation on Pitbull’s album “Dale”. Last year Mohombi finished 5th in Melodifestivalen’s final with “Hello”.
Backing vocalists of the number (off stage): Lars Säfsund and Emelie Fjällström
Dancers: –
Choreographers and performance creators: Thomas Benstem, Sacha Jean-Baptiste and Lotta Furebäck