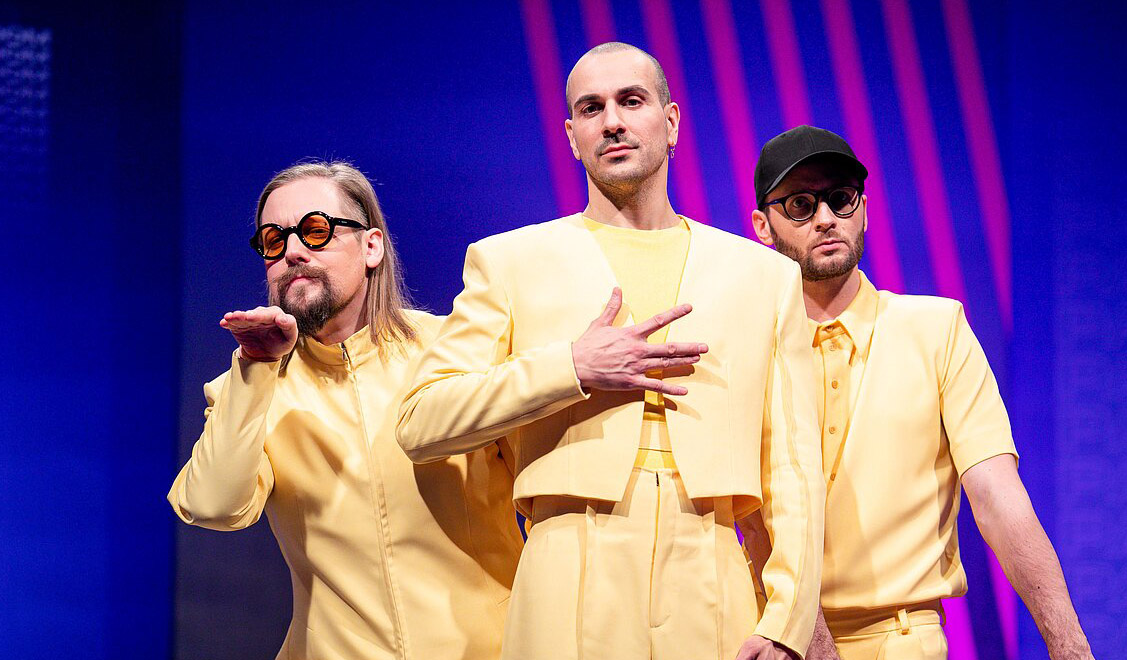 LRT has just broadcast the final of the second edition of Pabandom iš naujo!, giving their confidence to The Roop for the second year in a row to represent them on the Eurovision stage with overwhelming support by the seven-member jury and the viewers at home.

Unlike previous shows, the jury was not present live at the TV studio. The broadcaster decided to have an extended jury for the final, grouping all seven members that have rotated in the past shows. Due to meeting restrictions in Lithuania, this meant they had to connect remotely on a Zoom call. Along with them, was former Eurovision entrant Vaidas Baumila, who would interview all acts after they left the stage as well as moderate the debates between the jury members.

As for the televote, all Lithuanian residents could now send a total of 10 votes to the SMS number 1669 followed by their favorite’s running order. The revenue will be destined to financing the winner’s performance in Rotterdam, as well as a five-thousand euro award sponsored by the country’s collecting society LATGA.

As always, the show was hosted by Vytautas Rumšas Jr. and Ieva Stasiulevičiūtė, who started the finals giving an overview of the Eurovision Song Contest to a Lithuanian audience with a few jokes in-between. The postcards before the performances showed all artists doing different activities across Lithuania, trying to get inspiration for writing new music.

Titas and Benas performed first, with an entry that was written by Gebrasy―No. After their performance, without any notable changes compared to the previous week, the two cousins explained that ‘every time we get off the stage, we are still in a state of shock,’ not remembering much about their performance.

18-year-old Martyna Jezepčikaitė followed wearing the same butterfly overalls we’re used to, designed by Agnė Kuzmickaitė, while her dancers opted not to wear a skirt this time and reverted to their first outfit. The Alytus-born singer told Vaidas that, regardless of the result, ‘we told ourselves to go in and explode on stage. And so we did.’

Gebrasy, third to perform, was visibly overwhelmed following his performance, which featured new visuals, as he immediately burst out into tears at the interview room. The jury also praised his performance, with chairman Ramūnas Zilnys calling him part of the future of Lithuanian music and cementing the young artist as one of the favorites to win.

Kaunas resident Voldemars Petersons came up next, featuring as usual his live band TheBreakHearters! In the end, the Latvian act decided to keep the same performance as in the semi-final, wearing a shiny red coat. The performer was optimistic after the song, hoping that ‘we have unlocked the audience’s hearts.’

The only song in Lithuanian would then appear, as Evita Cololo, who didn’t hide her nerves before the performance, took to the Vilnius stage with Be paslapčių wearing a new black coat. Afterwards, she would tell Vaidas that ‘after the initial stress, I think everything went fine,’ hoping to win some support in her debut.

The Roop were the last to perform, in a clear position of fan favorites to take the ticket and go to Eurovision. With a similar performance to the heat, featuring the same repetitive moves that have become so popular on social media and given them over a million streams, the jury didn’t hide their excitement either.

Ramūnas Zilnys didn’t hesitate to state that The Roop would become Lithuania’s 2021 representatives, even before the results, a stance that would be vocally shared by other members such as Ieva Narkutė and Vytautas Bikus.

After the six competing performances and a second jury debate, indie band Sisters on Wire performed Mėlyna, Mėlyna and Taip jau gavosi on the show. The band, formed in 2014 in Vilnius, became famous last year thanks to their first Lithuanian songs, getting nominated to the Best Single of the Year with Mėlyna, Mėlyna and to the Best Band of the Year at Lietus’ Gold awards and at TV3’s M.A.M.A. awards.

Here is the full scoreboard! As widely expected by most fans, The Roop took the crown in both jury and televote, forming a huge gap between them and the rest of the competitors, while the jury gave them the maximum score possible with 84 points.

As such, The Roop get a second chance to represent Lithuania in Eurovision! Their entry Discoteque marks a great change compared to their previous song, with many moves bound to become famous on social media and an undoubtedly catchy chorus. How will they fare in Rotterdam?