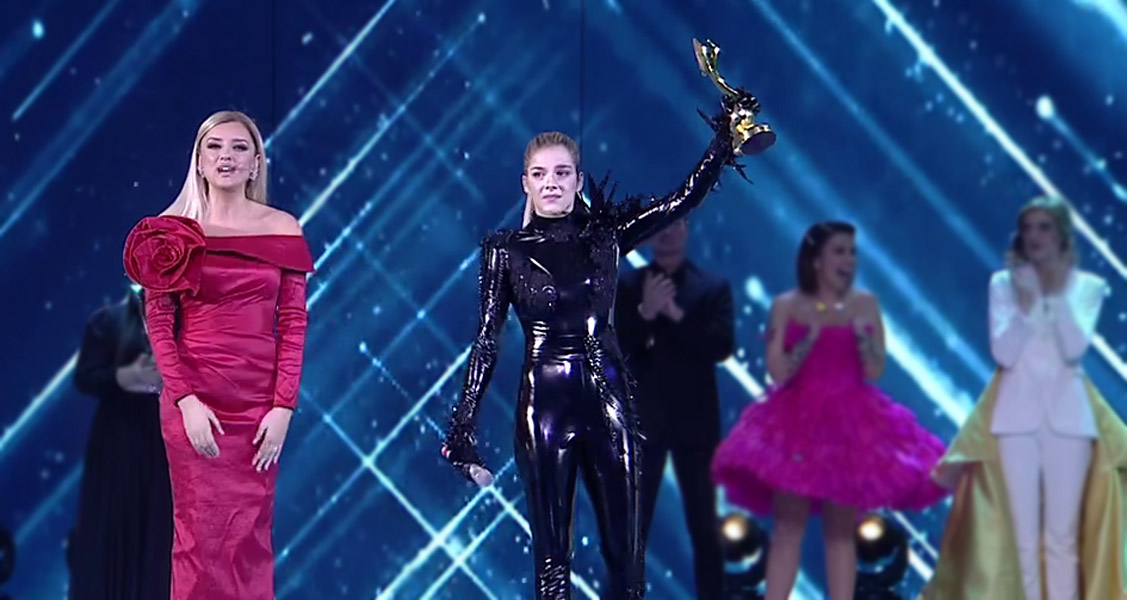 Festivali i Këngës concluded its fifty-eighth edition last night. Albanian Broadcaster RTSH celebrated another year the musical diversity and its great musical culture consolidating itself once again as one of the longest-lived festivals in the Mediterranean and Europe, only surpassed by prestigious festivals such as Sanremo or Eurovision.

This edition has had a greater international approach since the final decision, as well as the participants who managed to reach the final, have not fallen directly into a national jury. Instead, three of the five members of the panel of jurors did not have an Albanian nationality, being from Greece (Dimitris Kontopoulos), Sweden (Christer Björkman) and Iceland (Felix Bergsson).

The fact of including an international jury has given much to talk to local and international media since, on the one hand, some people think that public voting should be required in the Albanian festival as well as complaints regarding the preference of experts from outside the country before its own population were heard. On the other hand there are very positive comments about the introduction of foreign entities since they have linked in a very solid way the cultural history of the festival while maintaining the national language and the orchestra with the European contest.

The festival has been presented again by Alketa Vejsiu, who began the gala by announcing the rules of the contest, the voting mechanism, the jurors and finally the finalists, who not only fought to win Festivali I Këngës but also for having the opportunity to wear the colors of the Albanian flag in Eurovision 2020. During the grand final, we have been able to see different styles, each one more elegant and sophisticated than the previous one. The host started the gala dressed in pink while performing a welcome song accompanied by a parade of drums.

The final was inaugurated by one of the favorites to win. Valon Shehu, who has been responsible for representing the essence of rock in the grand final of FiK 58 with the song “Kutia e Pandorës”, composed by the winner of the 56th edition of the Festivali I Këngës and representative of Albania in Eurovision 2018, Eugent Bushpepa. The proposal provides one of the most energetic instruments and enriched by the orchestra of this edition.

After this, Sara Bajraktari, performed “Ajër”, a heartfelt ballad that shows the most sensitive side of the artist, which is wrapped in the instrumental evolution of the orchestra and blue backgrounds that turn to the viewer’s sensitivity.

The third to perform Robert Berisha, who has changed the blue backgrounds and quiet sounds for the passionate reds of a ballad entitled “Ajo nuk është unë” and influenced by small Latin brushstrokes creating a sense of tradition with innovative apices, which cause the applause of the public but does not generate great audience expectation.

Tiri Gjoci was in charge of continuing the gala performing his ballad “Me gotën bosh”. The singer appeared on stage accompanied by his two dancers, one dressed in white and one in black, who danced through every corner of the stage to liven up one of the most common ballads of the edition.

Then Bojken Lako performed “Malaseen”, a ballad with experimental touches on which instrumental part sounds very innovative with the orchestra, but the international public doesn’t seem to like it much.

The sixth to perform has been Arilena Ara, who with her ballad “Shaj” is positioned as another of the great favorites to win the victory at the Albanian festival. The artist has been one of the few to have an author outside the country, Darko Dimitrov, who has composed and produced numerous Balkan nominations for North Macedonia both in the adult and Junior Eurovision Song Contest. The candidacy endows one of the best illuminations of the edition, given that despite not having any stage element, it is able to gain the spectator’s emotion thanks to its great expressiveness, its enveloping game of cameras and an orchestra that has been much more coordinated than in their respective semifinal. Arilena got the biggest ovation going back on stage to thank all the applause and public devotion.

The mission of breaking the ballad trend of the first half of the final has been played by Gena with his song “Shqiponja e lirë”. Unquestionably, it is one of the candidacies that despite sinning from a poorly elaborated staging, gives off one of the greatest energies and rhythms of the night, influenced by a purely Balkan instrumental with Mediterranean melodies.

Kamela Islamaj, which does not present one of the most modern and innovative ballads, but it does present the most avant-garde and symbolic style of the final to interpret his song “Më ngjyros”. This ballad is greatly enriched by the heartbreaking voice of its performer and the great sound evolution of the live orchestra.

Another one of the great symbolisms in terms of styling refers to that of Albërie Hadërgjonaj with white and gold clothes with wide sleeves and cut on the floor and a halo on the head, to interpret his ballad “Ku ta gjej dikë ta dua” as if it were an angel. Undoubtedly both candidates endow with a portentous scenic presence and great vocal tear.

The tenth place of action has starred in the great favorite of our readers and the great acclaimed by the international press to win the Albanian contest, Elvana Gjata. Her song “Me tana” has become the most viewed and reproduced video on the RTSH website, surpassing 3.3 million views on YouTube alone. Its staging is enlivened by six choristers who are preparing to form powerful choreographies and in a triangular arrangement, which the followers of the festival have associated with the staging of the Spanish artist Rosalía Tour ‘El Mal Querer’ although in a musical style it is completely different. It is a song that begins with ethnic influences and that once explodes, it becomes a dance Mediterranean song with ethnic instrumentals and Balkan regional dances. This time the red scarf has remained with Elvana at all times, culminating the performance with great applause from the public. After the acclamation of the public, she has had to go out to say hello to thank and support and emotion.

Olta Boka has had the hard work of succeeding the great favorite of the night, a job that has become more affordable due to the great telling between the rhythm of her predecessor and the emotivity of her ballad, which has rock apexes and a set design sophisticated and elegant that at certain times reminds of that of ‘Hold Me‘, the Azeri candidacy in Eurovision 2013 with a dancer in a kind of XL urn that embellishes and ornaments the musicality of “Botë për dy”.

The performances have ended after the performance of Era Rusi, another favorite with her song “Eja merre”, which has put the entire crowd on its feet with its commercial rhythms and its great attitude on stage.

The big international star of the night has been Eleno Foureira, a native singer from Albania but based in Greek territory who represented Cyprus at the Eurovision festival 2018 with the song ‘Fire’, which despite being in a second position has managed to consolidate itself as one of the historical favorites of the Eurofan public. Eleni Foureira has performed a 12-minute interval where he has performed his songs ‘The Psycho-rhythmic Rhythm‘, ‘Take Me‘, ‘Loquita‘, ‘Fire‘ and other songs such as the Eurovisive ‘Dancing Lasha Tumbai‘. Despite having problems with the backing track, Eleni has offered a full show full of dance, dance and stage presence.

After the 12 performances of the finalists, the presenter Alketa Vejsiu herself has sung a couple of songs to liven up the gala and demonstrate her acting and vocal talent.

Before finalizing the results, the last interval act was carried out, enlivened by the successful Italian singer Guisy Ferreri, who took part in X Factor and has been a candidate at the Sanremo festival three times (2011, 2014 and 2017).

After finishing the 12 performances of the finalists, the five jurors have left the stands to deliberate their decision about the winner of the Festivali I Këngës and consequently the next representative of Albania in Eurovision.

Due to the low number of jurors there were no numerical votes, but the name of the three candidates who would occupy the first three positions was directly announced, Sara Bajraktari being rewarded with the bronze, Elvana Gjata the silver medalist and Arilena Ara the winner and consequently the representative of Albania in Eurovision 2020.

The audience lived the announcement of the winner very intrigued, since both (Elvana and Arilena) were the great acclaimed audiences and knew how to cover both the euphoria of the winner and the disappointment of the second finalist. The results were announced by the head of the Swedish delegation Christer Björkman, while Jonida Maliqi (last winner of the festival) handed over the trophy.

So what do you think of the outcome of this Festivali i Këngës? Let us know in the comments section below!