It’s time for Serbia, the country which is back to Junior Eurovision after a two-year absence!

SERBIA IN THE JUNIOR EUROVISION

After Serbia and Montenegro dissolved in 2006, Radiotelevizija Srbije (RTS) decided to continue to take part in the contest. Their first entry as an independent state was in 2006, when Neustrašivi učitelji stranih jezika represented Serbia with “Učimo strane jezike”, coming 5th.

Serbia’s best result came in 2007 when Nevena Božović represented Serbia with “Piši mi” and in 2010 with Sonja Škorić with Čarobna noć, both finishing third. Serbia’s worst result was in 2008, when Maja Mazić finished 12th with “Uvek kad u nebo pogledam”. 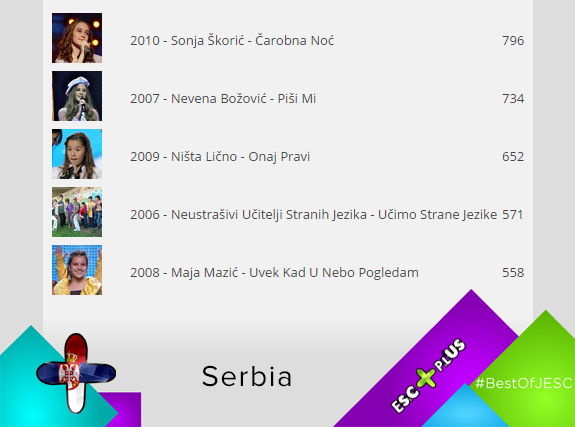 4 thoughts on “The Best of JESC – Serbia”