It is expected that in a couple of week we will have the finalised list of artists that will take part in Swedish national selection show, Melodifestivalen.

Last week we revealed to you the first list of artists that were reported to have been selected so far for the contest show, you can check the article here.

But now, Swedish media are reporting two further names that have been added to the roster for 2017; Jon Henrik Fjällgren and De Vet Du.

You may remember Jon Henrik from Melodifestivalen 2015 where his song “Jag Är Fri”, finished second behind eventual Eurovision winner Måns Zelmerlöw “Heroes”. The song was a joik song which paid tribute to Jon’s heritage where he was adopted by a Sami-family at a young age. Before entering Melodifestivalen in 2015, he won the talent show Talang Sverige 2014 in Sweden which was broadcast on TG3. He was somewhat of a fan favourite going into Melodifestvialen with his very ethnic sounding song that seemed very stand out during the Swedish contest, whether he could have matched Måns Zelmerlöw‘s result in Vienna – we will never know. 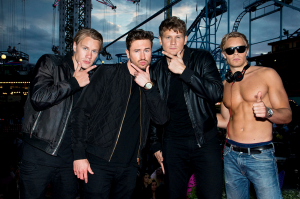 The second act to add to the list, is Swedish pop-comedy group De Vet Du (You Know It). They would be newcomers to the contest, but it is hope they would bring some kind of comedy to the shows. Their music is often satirical, mixing comedy and sarcasm into their music, which often shows the funny side to social situations. They first become YouTube sensations before they were signed to Universal Music Sweden, and have had several chart hits in Sweden such as “Fy fan va stek” and “Dansa som kungen”.

Christer Bjorkman, the executive producer for Melodifestivalen, is hoping he can build upon the success of Samir & Viktor from the past two years by appealing to the growing teenage audience for the show. Their songs from 2014 and 2015 have earned great success for the contest and the group, with over 40 million streams on Spotify alone for “Groupie” and “Bada Nakna”. It is however still unclear if the duo will be back for a third year running. We live in hope…

The full rumoured list for Melodifestivalen 2017 is as follows:

We will keep you updated with further developments with Melodifestiavelen 2017 very soon.