2017 Irish Eurovision entrant Brendan Murray will join the line-up as well, as several artists in the line-up have been hot fan and strong favorites to represent Spain in Eurovision!

We can’t wait anymore! It is big time for one of the most exciting nights in the Spanish pop music scene, the Coca Cola Music Experience festival will be held once again at Madrid’s WiZink Center, which will hold up to 15.000 spectators for the occasion. Popular DJ and 40 Principales radio host Tony Aguilar will serve as Master of Ceremonies for the show. Doors open at 16:00, the concert will kick off at 17:30.

A set of international and national artists have already confirmed they will be present and performing in the event, but of course they were not all announced at the same time, as the excitement more increased. The event could not also leave Eurovision fans hands empty and the organization proposed this year’s Irish entrant in Kiev Brendan Murray to come and perform for the audience in Madrid, something we just love, no doubt he will be singing his “Dying To Try” and perhaps many other unreleased songs or covers! The singer conquered the hearts of the ESC audience regardless the unfortunate result in May. It is not the first time the singer will be in Madrid when it comes to promote his music career as he was a guest at Manel Navarro‘s first gig in Madrid after Eurovision.

The headlining act this year is no other than the American band DNCE, whose lead singer is Joe Jonas, mostly known for their banger with “Cake By The Ocean” released in 2015.

Then, fans will get to see Latin pop group CNCO performing his iTunes and Spotify top-chart single “Reggaeton Lento (Bailemos)” and their fellow friend and singer Ana Mena performing “Ahora Lloras Tú” together with them, as well as many more tracks and surprises they have prepared. The guys and Ana have conquered this year’s Latin music panorama in Spain and also Latin América.

Benjamin Mascolo & Federico Rossi, known as Benji & Fede, have successfully built themselves a promising music career in Italy, even performing at last year’s Terza Serata of the Sanremo festival together with contestant Alessio Bernabei. The duet, who started their path in 2010 through YouTube, also collaborated with Italian artist Annalisa by recording the track “Tutto per una Ragione”, making a huge impact on this year’s Italian charts and radios and released their debut album in 2015. Furthermore, in early 2017 the guys went on to release their first and very own Spanish version of their track “Adrenalina”.

Another mash the fans will be looking forward to see on stage is Álvaro Soler, who we all love and rose to fame after releasing his most popular tracks “El Mismo Sol” and “Sofía“. The singer became a recognizable face in Italy when he was appointed to be one of their X Factor mentors and his collaboration with ESC 2014 Italian act Emma Marrone.

Interesting enough to see will be Argetinian artist Lali, who will be performing at this event for her very first time and also try to make the Spanish audience discover his music roots and skills on stage with her tracks “Ego“, “Boomerang” or even “Roma-Bangkok”?. Lali is also an actress in Argentina and has appeared at several TV teen soap operas.

And it is no wonder why Coca Cola in Spain is making this for the 7th year in-a-row as in the past, big names such as Meghan Trainor; Iggy Azalea; former The Wanted; The Vamps, who you may remember by watching them performing at this year’s UK Eurovision: You Decide; British X Factor boyband Union J; Abraham Mateo; Cimorelli; DVICIO; Spanish NF contestants Xuso Jones, Mario Jefferson and former Auryn, Blas Cantó; among many other interesting names and influencers, who will also be present at this year’s evening such as Curricé or Roenlared. 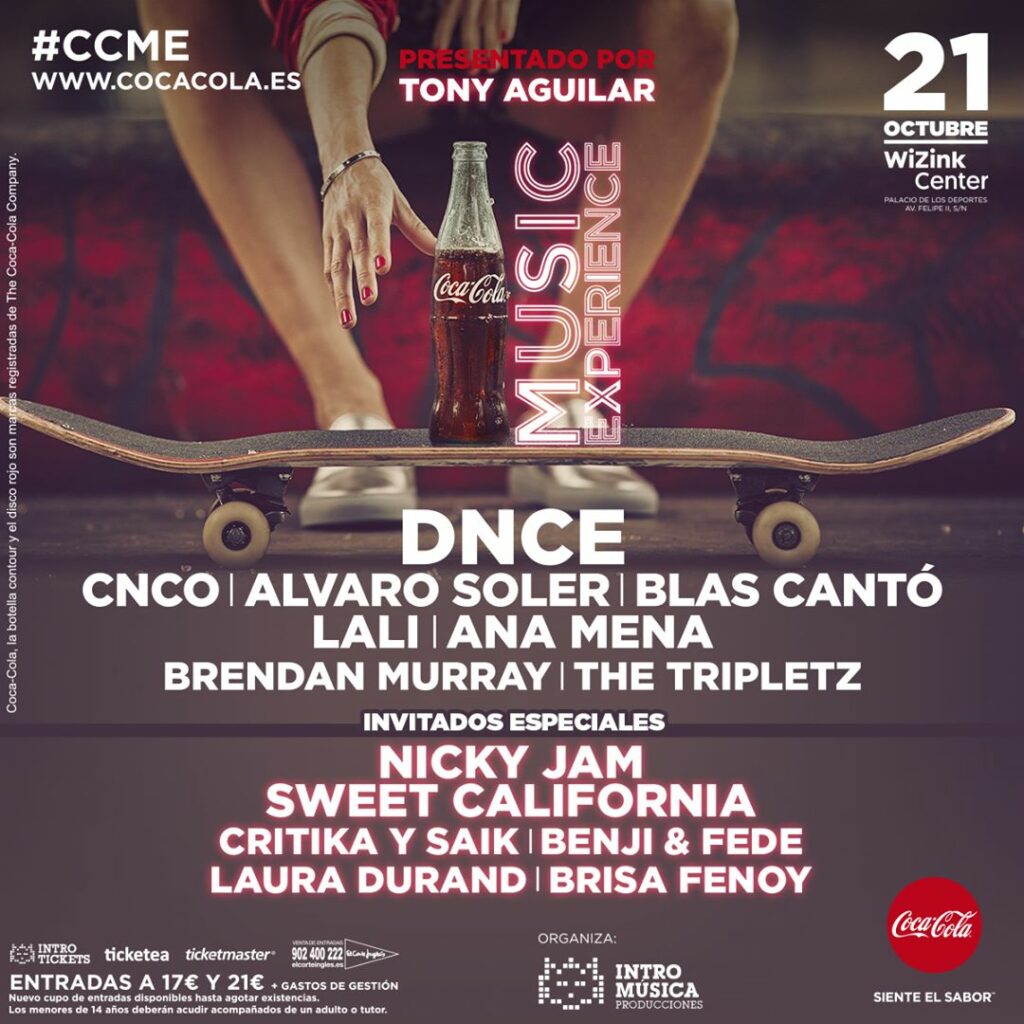 As we do want you to follow the latest updates and promo on everything happening around, just go into the social media profiles on YouTube, Instagram, Facebook and Twitter to see how everyone gears up for Saturday. You can also head up for more information regarding the festival by clicking on the following LINK and visiting Coca Cola’s official site.