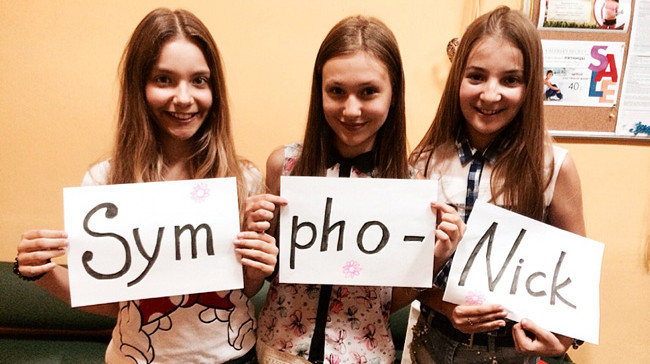 Ukrainian finalists Sofiya Kutsenko, Marta Rak and Amalia Krymskaya already have a name, they will form the trio “Sympho-Nick”!

The girls were named finalists after winning the Music Academy of Eurovision 2014, show broadcasted by NTU  to select the best voices. Last year’s representative Sofia Tarasova was selected from that show together with  another finalist, Polina Andreeva.

The song to be performed by the trio “Sympho-Nick” is being composed by themselves, Yevgeny Matyushenko and Milhail Nekrasov, the face behind the Ukrainian Eurovision entries 2004, 2005 and 2013 and the Junior Eurovision entry 2013 “We are One” by Sofia Tarasova.

Mikhail Nekrasov has explained to Teleprostir the origin of the trio’s name: it comes from their voices and the music, they reflect classic vibes and modernity. The song contains “symphonic” arrangements and “nick” just refers to the internet usernames which reflects the modernity.

Ukrainian representative at Eurovision 2013 Zlata Ognevich is helping the girls with vocal lessons, together are now preparing their performance at national final. Ukrainian final will take place on August 9 in Bukovel and it will be broadcasted live on NTU and junioreurovision.tv.