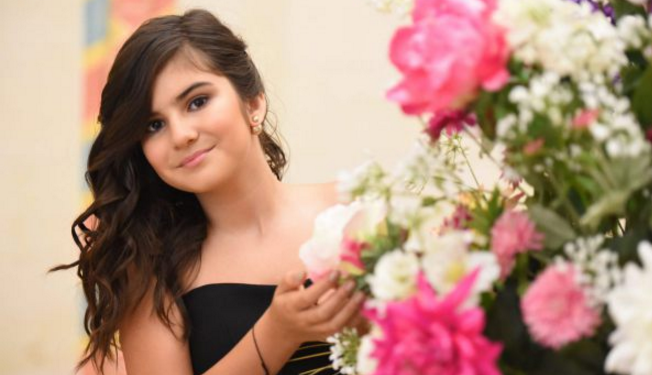 The most mysterious at this year’s Junior Eurovision has just revealed its chosen act for Sofía: 11-year-old Russian singer Kamilla Ismailova will represent San Marino!

Kamilla will sing the song ‘Mirror’ written by the Italian composer Piero Romitelli:

“Participating in the Junior Eurovision is a great achievement in itself, – my childhood dream come true! But still, I want as many people as possible to listen to my song and fall in love with it, and certainly I want to win!”, says Kamilla.

“My song has a very deep meaning. It is about a girl who has managed to overcome her fears, meet herself; has learnt how to live in harmony with her own reflection – her alter ego.”, adds the Russian star.

11-year old Kamilla Ismailova is a young singer, actress, and TV presenter from Moscow – but music is her true love!

Despite being born and raised in Russia, Kamilla will represent the Republic of San Marino in Junior Eurovision 2015 – and this did not come about purely by chance! Kamilla visited San Marino in her early childhood, and since then this small country has taken a place in her heart. The language, the feeling, the people and their pace of life, and the traditions of the country all made a big impression on Kamilla, who promised herself that someday she would be connected with the country again.

While she took interest in the culture of San Marino and its history, Kamilla also always dreamed of performing at Junior Eurovision. Having watched the qualifying rounds and the live final, she wondered how children of her age could get to such a “wonderful” content – and then the idea hit her. Why not send a recording of her new song to the television station in San Marino? And so she did, plucking up the courage, Kamilla send the song and crossed her fingers!

When the producers contacted her parents and informed them that she was approved by the channel management to represent San Marino at the Junior Eurovision Song Contest, Kamilla was filled with delight and surprise! From then on, the hard work started – translating the song into Italian, and further learning the language; having vocal lessons and choreography classes; creating ideas for the performance and shooting the video. Her life changed incredibly from that moment on.

Aside from Junior Eurovision, Kamilla and her friends from the “S. T. A. R. S” Academy of cinema and show-business host a music chart called “Kids’ Top 10 with Yana Rudkovskaya”, and also present a fashion/music program called “TrYnd-Fashion”. She is also a lover of horses, and enjoys racing with them.

Kamilla enjoys getting into the world behind the looking glass, and behind the camera lens – so it’s no surprise that her song is called “The Mirror”. Her motto in life is simple: “Never give up, and chase your dreams. Don’t pay attention to obstacles, they’ll go away”. Considering where that approach has got her already, it seems like Kamilla’s way of thinking is one to take note of!

This is the third participation of San Marino at Junior Eurovision which made its debut in 2013. Michelle Perniola, who two years later performed at Eurovision, represented San Marino in Kiev with the song “O-o-o Sole Intorno a Me”, he reached the 10th place.

Last year, the girl band “The Peppermints” waved the Sammarinese flag in with the song “Breaking my Heart” coming second last. One of the members of the band, Anita Simoncinni, represented San Marino at Eurovision 2015 together with Michele Perniola.

What do you think about the Sammarinese choice?