The second show of the Italian music festival Sanremo has just finished and we know now the ranking of the remaining 10 artists from the Campioni Category.

The scoreboard which has been established according to a 50-50 combination of public televoting and a professional jury is as it follows: 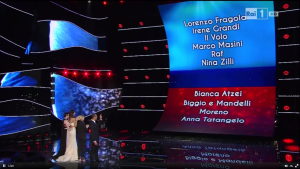 This ranking only shows the six artists with the most amount of votes and the four ones with fewer votes alphabetically, so it does not specify the position according to the votes each artist have received.

Although none of the artists has been eliminated, this ranking will contribute to the final results to be revealed during the semi-final on Friday 13th. Then, a mix of public televote, professional jury and audience together with the previous rankings, will decide the four acts which won’t make it to the Saturday’s grand final.

During tonight’s show, Conchita Wurst, winner of the Eurovision Song Contest 2014, has performed her song ” Heroes ” as a guest.

Who were your favourites of the second show?

Vote for your favourites to represent Italy at Eurovision 2015: