The German broadcaster has just made public who the 10 acts for the wildcard heat (Clubkonzert) are.

The show is set to be on the 19th of February in Hamburg from Große Freiheit 36, solely the German audience by televoting will decide the winning act, who is going through the final and will join the other 7 established candidates in the show scheduled on the 5th of March in TUI Arena (Hannover) where last year’s Eurovision winner Conchita Wurst and Mark Forster will also be performing during the show.

The line-up for Clubkonzert on the 19th of February looks as it follows: (click on each of them to know more about her style – German language)

From approximately a thousand candidates on, the jury panel (Representatives of Norddeutscher Rundfunk (NDR), the production company Brainpool, youth-oriented and pop radio stations of ARD and the record labels Universal, Sony, Warner as well as some independent labels decided to choose these final 10 acts and ”even though less videos than in 2014 were received, the quality seems to be higher” – Thomas Schreiber (NDR’s director) stated.

Tickets for this show are also available to purchase, worth 18€, clicking by HERE.

Barbara Schöneberger will host the show along with Janin Reindhardt, who will be talking to the artists in the Green Room.

Who will join the following artists? Stay tuned to ESC+Plus for more information about this edition of ”Unser Star für…’, this year ”Österreich” as the contest will take place in Vienna in May. 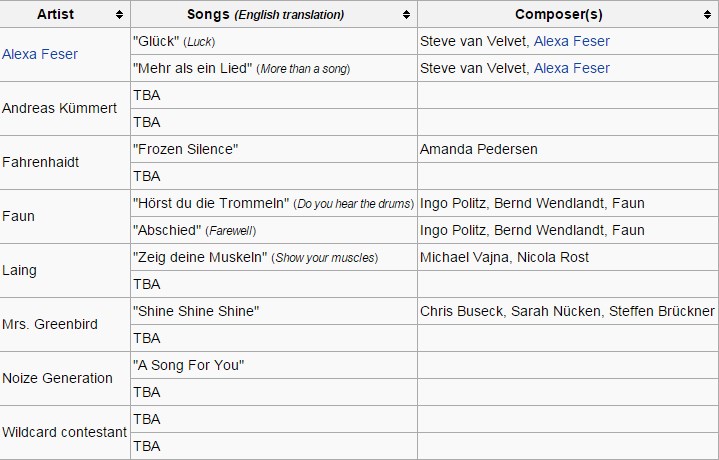