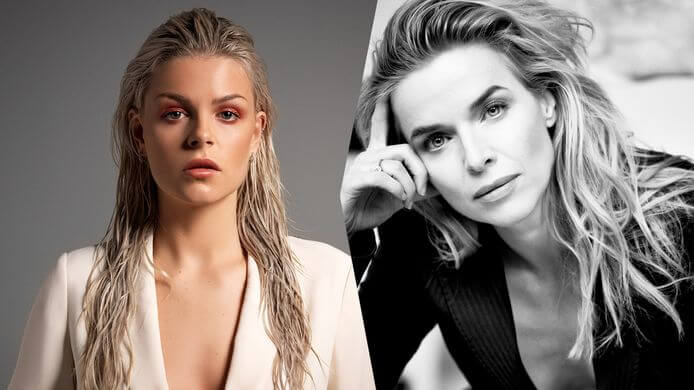 The Dutch national broadcasters NPO, NOS, and AVRO/TROS have finally revealed the last interval act, the one that will be performed during the first semi-final of the Eurovision Song Contest 2021 on May 18th 2021. Dutch singer Davina Michelle, and the Netherlands’ acting pride in Hollywood Thekla Reuten, will join forces in a specially water-inspired act. The name of the performance is “The Power of Water”.

Davina Michelle became an international sensation after she posted videos of herself singing online. She was discovered by the world-famous singer Pink, and Davina Michelle even got a chance to become the supporting act of Pink during the Dutch leg of her “Beautiful Trauma World Tour”. Davina Michelle has also covered Duncan Laurence’s winning song “Arcade” on multiple occasions.

Actress Thekla Reuten started out in Dutch and German series, movies, and theater plays, but eventually took the leap to Hollywood after her performance in the Dutch Oscar-nominated foreign language film, “Twin Sisters”. In the USA she had roles in popular series, like “Lost”, but also in international Hollywood movies, like: In Bruges, The American, and Red Sparrow. As of 2020 she plays in the Netflix series “Warrior Nun”, which has recently been renewed for a second season.

“For centuries we, the Dutch, have had a love-hate relationship with water which is unique in the world. We have fought against it, but we cannot live without it either. In the act we tell the story of the power of the water and the resilience that we all have as human-beings. The collaboration between Davina Michelle and Thekla Reuten is magnificent. We promise that this performance will put the Netherlands on the map.”

Gerben Bakker, Head of Show of the Eurovision Song Contest 2021

The Netherlands vs. water

The reason why there must be “something about water” in a Eurovision Song Contest that is organized in the Netherlands is because the Dutch can and cannot live without water. As long as there have been Dutch people the Dutch have been fighting against water, but they have also learned to live with it. Nine million Dutch people live in the western coastal area of the Netherlands, and a huge part of this area is situated beneath sea level. The lowest part of this area is 6.76 meters beneath sea level. As the sea level is rising, a huge part of this area is under constant danger. Internationally the Dutch are known for their water management, a huge example is the Delta Works in the provinces Zeeland, South-Holland, and North-Brabant. These were built after the North Sea Flood of 1953, in which a great number of Dutch people who lived in the coastal area lost their lives.

This interval act is filmed at the Delta Works in the last couple of months. The music of this act is composed by Davina Michelle and her writing team. The most modern techniques will be used during this performance, and a world of water will be created in the Rotterdam Ahoy arena with the use of augmented reality.

“Almost two years ago I was approached by the Eurovision team with a concept in which the story of water is the central theme. Water connects, it is resilient, and it is an inseparable part of the Netherlands. Together with the Eurovision team we have been working on a unique act during which these characteristics are the main theme. I wrote the song “Sweet Water” in which water is used as a metaphor for something that connects all the people in the world. We are all different, and live in different environments, but we all need water, because it brings us all together. I cannot wait to show you what we have been working on for so long.”