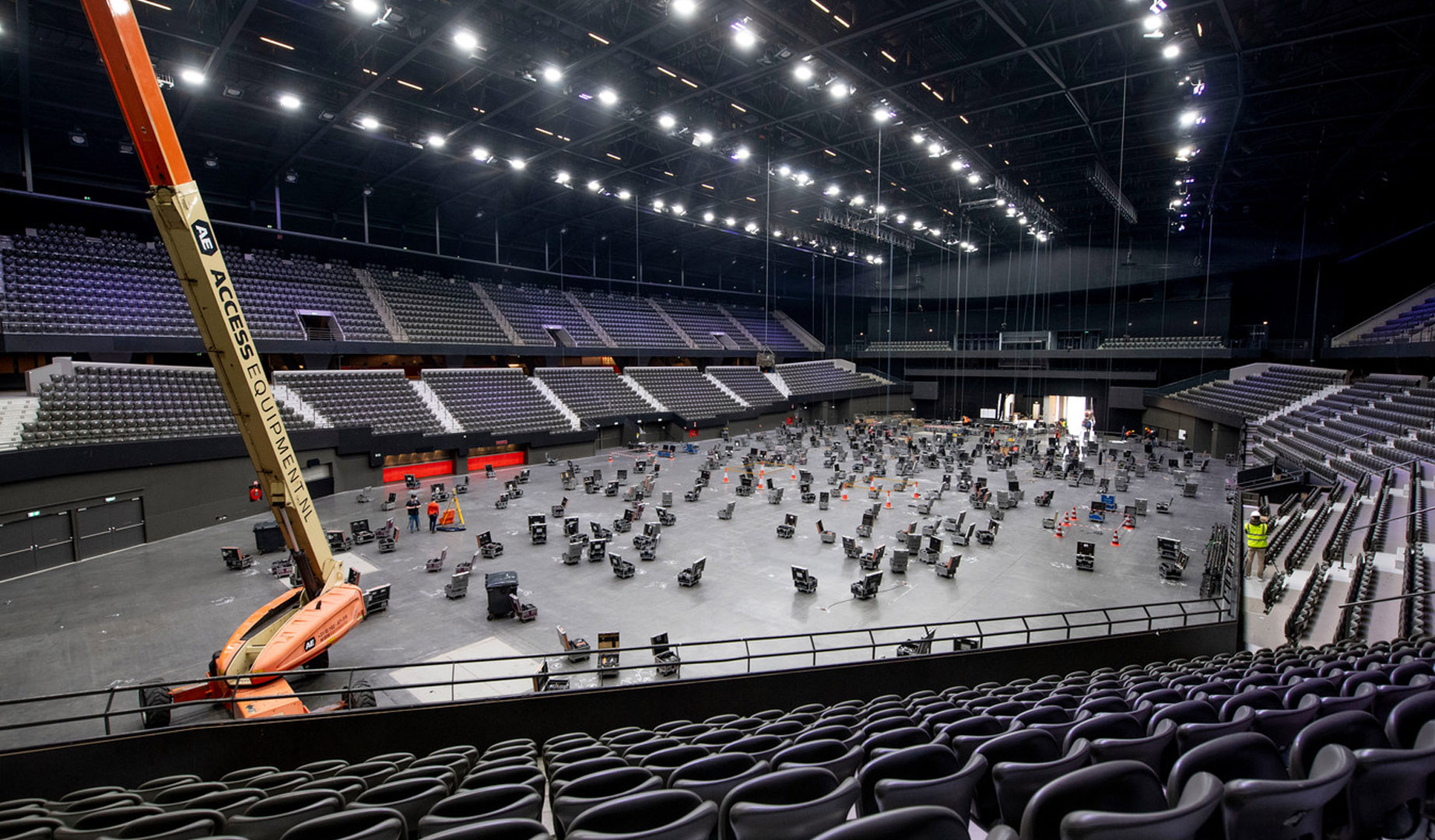 After half a century Rotterdam Ahoy has been through the works, and it has gained a lot of expertise when it comes down to hosting big events, but none of them was as huge as the Eurovision Song Contest 2021 will be. On April 11th 2021 there was a kick-off for all the preparations needed to host Europe’s favorite TV show. Preparations will take 3 weeks, 24/7, at first with hundreds of people, and eventually with thousands. These are the Olympics of music.

On Sunday April 11th 2021 somewhat after 10:00 AM: Outside it is about 5 degrees Celsius, and there is a pale sun. Inside Rotterdam Ahoy the first truck with tens of flightcases is being opened by the Director of Rotterdam Ahoy, Jolanda Jansen, and this year’s Dutch Director of the Eurovision Song Contest, Sietse Bakker. It is a year after Rotterdam Ahoy opened trucks in the same way to host an emergency hospital for COVID-19 patients. The empty beds back then are now crates full of lights, amplifiers, and microphones…

This kick-off is a symbolic one, because truth be told, there were already trucks coming into the Ahoy event center at 06:00 AM. That Sunday, more specifically, 42 trucks were driven into Rotterdam Ahoy. All material that came in was for the ceiling construction. All day long there were cables hanging from the ceiling to hoist all sorts of light and sound equipment from the flightcases on the floor.

“For almost 7 weeks we have people present who are managing the organization of the Eurovision Song Contest 2021 24/7. We have the biggest stage ever in the Netherlands, and it is also the most complex television operation we have ever had in this country. After a year of no events we immediately started organizing the Olympics of music.”

How huge the Eurovision Song Contest has become can be explained by factual numbers. For the greatest productions there are 250 points made in the ceiling on which all sorts of equipment can be hoisted; for the Song Contest there are 600 needed in the Ahoy arena. 190 tons of weight will hang from the ceiling of the venue, which is enormous. There will be 2,000 lights, but also video screens, and speaker systems. On that Sunday last week there were 250 people working in the grant arena, which was only a small number, because eventually that number will double. All people will wear a mouth mask, a yellow or orange safety jacket, and a helmet with the logo of this year’s Eurovision Song Contest.

In the upcoming 3 weeks

A mere 3 weeks is needed, to have the first technical rehearsals at the end of April. As of the 8th of May the first contestants will sing on stage during the first rehearsals of the semi-finals (broadcasted live on May 18th and 20th), and the final (broadcasted live on May 22nd). For now 3,500 people per show will be allowed by the Dutch government, as these events are considered Fieldlab Events, or test experiments for upcoming events due to the COVID-19 crisis. The audience will only be allowed on the grandstands in the Rotterdam Ahoy, while the floor of the arena is reserved for workers and the competing artists. In front of the stage the green room will be constructed, the place where the artists can take place after their performance waiting for the votes to be counted.

In case of no audience

The audience will be seated on the grandstands. In case there is a chance that there is no audience allowed at the time of the live-shows a plan B is being put in place. A curtain of lights will be placed under the grandstands, and these will shine through the arena, and because of this you will not be able to see any empty chairs.

For now an audience is welcome. People can be tested all over the country. For employees and the accredited press there is a camp of sorts next to the Ahoy with a separate COVID-19 test area, during the days of the Contest a COVID test with cotton buds or a breathalyzer is needed to be able to enter the arena. Every two days all personnel will be tested there.

“We have been looking forward to this for such a long time, it feels a bit like D-day for us. A year ago trucks were driven into the arena to create an emergency hospital for COVID-19 patients. Back then there was also press present. At the same place where the grant stage of the Contest will be, there was a tent for bed linen and medical material a year ago.”

The images of last year’s COVID-19 situation will disappear into the background when the stage construction for 2021’s edition of the Eurovision Song Contest is done. The stage will be 52 meters in length, which does not even fit the Ahoy arena. A part of the stage will be built over the grandstands. A couple of year ago, in 2016, the MTV European Music Awards were hosted in the Ahoy, but the Eurovision Song Contest is much bigger…