EBU and Public Broadcasting National Company of Ukraine will hold the semifinal allocation draw this morning from the Column Hall at Kiev’s City State Administration in Kiev, the host city of this year’s Eurovision Song Contest. This event will also feature the traditional insignia exchange between Eva-Louise Erlandsson Slorach, President of Stockholm’s City Council and Kyiv City Mayor Vitaliy Klychko.

Prior to the event, the broadcaster presented yesterday the theme-art or visual identity and the slogan for the contest, which is “Celebrate Diversity” and will be part of the stage visuals at the draw today. The logo represents the traditional Ukrainian necklace, “Namysto”.

The 37 semi-finalists of this year’s contest have been allocated into six pots, based on historical voting patterns as calculated by the contest’s official televoting partner Digame. Drawing from different pots helps to reduce the chance of so-called neighbourly voting and increases suspense in the Semi-Finals, therefore, the result on this calculation looks like this and will be used to draw in which semi-final every semi-finalist will be taking part in: 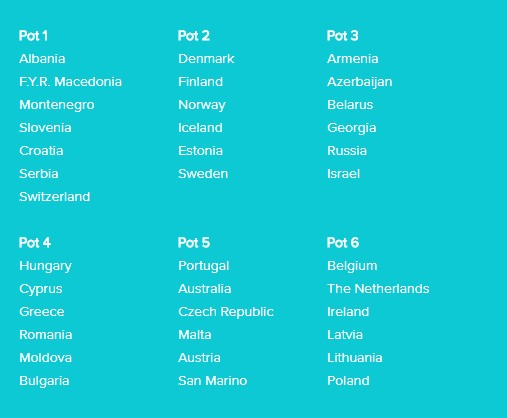 SRF requested a place in the second semi-final, which was subsequently approved by the Reference-Group of the contest and EBU. It will also be decided in which of the semi-finals the countries of the BIG 5 and host country Ukraine will be compulsory broadcasting and casting their votes. The Reference-Group also supported Germany’s request on broadcasting and voting in the second Semi-Final on the 11th of May.

The show will start at 11:00 CET and you will be able to watch it at the following YouTube live-stream transmission below:

The results of this ceremony will not determine in which order the countries will be performing when it comes to their running place at the contest in May, only in which semi-final they will be part of.

Preparations for the Eurovision Song Contest are well undergoing, although it is still unknown and have not trascended details on the hosts of the three shows in May and the stage design which is in hands of Florian Wieder and his agency, responsible for the stage concepts in 2011, 2012 and 2015 respectively.