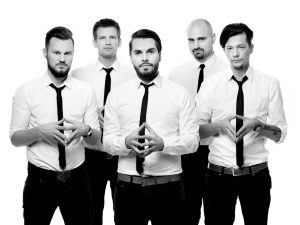 After 10 years as a member of Traffic, Stig Rästa announced on Facebook that he is leaving the band. The group, consisting of lead vocalist Silver Laas, guitar players Stig Rästa and Robert Vaigla, bassist Tõnis Kivisild, and drummer Ivo Priilinn, was formed in 2006 and has participated in Estonia’s national final four times since 2008; their most recent attempt was in 2014 with the song “Für Elise.”

Stig Rästa has participated in Estonia’s national finals ten times and is best known for representing Estonia in 2015 with Elina Born and the song “Goodbye to Yesterday”, placing 7th in the final. Besides his attempts to represent Estonia as a member of Traffic, he has also participated in Estonia’s national final twice as a member of Slobodan River in 2003 and 2004, once as a member of Outloudz in 2011, and twice as a composer for other artists (2013 and 2016 for Elina Born and Jüri Pootsmann, respectively).

After winning Eesti Laul with 79% of the vote, Stig Rästa and Elina Born proceeded to place 7th in the Eurovision final.

Slobodan River, which was active 2002-2006, placed 3rd at Eurolaul with the song “Surrounded.”

In late August, Belgian singer Udo posted on Instagram a picture of himself, Stig Rästa, and other artists recording in the studio tagged with #esc2017. Is there a chance that Stig could be attempting to write for Belgium? Could he also be writing for other countries for Eurovision 2017?

4 artists on 1 photograph. Got this pic from Swedish based artist Mahan, a great Persian vocalist. What an interesting session that was with Mahan, Damae (former singer of Fragma, Germany) and Stig Rästa, who participated at the #esc2015 for Estonia. #songwriting #artistslife #music #esc2017 #singer #songwriter