Tonight we will see another national final take place, this time from Minsk, Belarus, to find out who will represent the country at Eurovision 2017 in neighbouring Ukraine.

13 songs are in with a chance to represent Belarus at Eurovision this year, and tonight all of them will take to the stage to show what they can do to impress both the viewers at home and jury which will both make up the final vote to determine the winner. The show will be broadcast on Belarus 1, Belarus 24 as well as Belarus FM radio and streamed through TVR.by kicking off at 20:00 CET. The show will be presented by Olga Ryzhikova and Eurovision 2014 representative TEO; real name Yuriy Vashchuk. 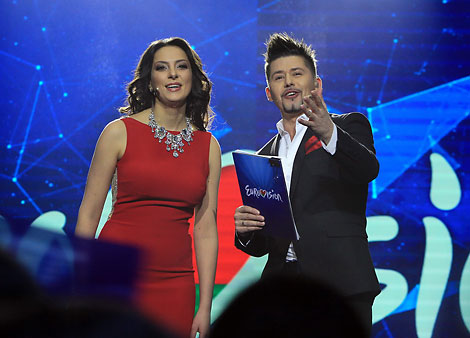 It is a very strong national final with some very strong songs. In the national final we also have some returning artists (a national final wouldn’t be the same without them tbh). NAVI (2016), Nuteki (2012, 2013, 2014) and NAPOLI (2014, 2015, 2016) have all tried to represent the country at Eurovision before various times, and even Vladislav Kurasov tried to represent Ukraine last year with his haunting ballad, “I’m Insane”, but sadly didn’t make it past the semi final stage; perhaps he will fair better in Belarus.

The running order for tonight will be as it follows:

BTRC, the Belarusian broadcaster, have also announced the jury members for the national final this evening, who will take 50% responsibility of the overall results:

Who do you want to represent Belarus at Eurovision 2017? Let us know and vote in our poll!