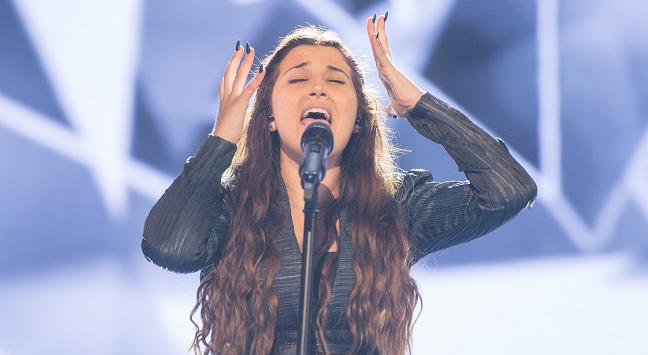 The MESC final for Eurovision 2015 has just finished! Amber with the song “Warrior” will represent Malta in Vienna:

“Warrior” is composed by Elton Zarb and Matthew Mercieca Muxu (composers of the Junior Eurovision 2013 winning entry “The Start”). Elton Zarb was also behind the JESC 2014 theme song #together.

The winner has been chosen by a mix of jury and public televote during a show hosted by Daniel Chircop and Lyona Xuereb Gatt live from the Marsa Shipbuilding in Marsa (Junior Eurovision 2014 venue).

The Eurovision 2014 winner Conchita Wurst has performed her winning entry “Rise Like a Phoenix” and new song “Heroes” as guest.

Amber was born on the 26th of May 1991, she currently lives in Kalkara and is a full time student at the University of Malta, currently following a B.Ed in Early Childhood Education & Care. At the tender age of 5 years Amber was always singing and taking part in various school plays, activities and was also involved in church choirs. Amber grew older and that’s when school teachers started to see her potential and encouraged her to take up vocal lessons, but she never seemed to believe as much in herself and continued to focus on the sport she had already been practicing, Judo.

Amber had been training Judo for over eleven years, she worked hard and worked her way up to a competition level. It was then when a tragic accident happened to her during a competition. This accident turned her life upside down. She decided to stop competing for a while, there was no other alternative, but simply training and not competing did not make her feel happy and fulfilled. She had to invest her energy in something else, something that made her feel the same passion she had towards Judo. This is where she discovered that singing was her true passion.

At the age of 16 she took her first vocal lesson with Mr. Brian Cefai. Amber took her next step by appearing in two television competitions ‘Trid Tarah’ and ‘The Academy’. During ‘The Academy’ Amber met Mr. Joshua Alamu the main vocal coach of SLS (Speech Level Singing) and after trying out his method, she felt like she found her place. Hence Amber found her style, the style she is renowned for; Jazz and Blues.

At the age of 18 she took part in a talent program called ’I.D ’ where she was the runner up of the first season. Amber considers this experience as a debut to her career. Amber then placed 4th in the ‘Malta Hit Song Contest’ in the year 2010 with the song ‘Take it easy’ and also ended that year on a good note, by winning the ‘Konkors Kanzunetta Indipendenza’ with the Song ‘Trid Taprezza’. In 2011, Amber submitted her first entry in the ‘Malta Eurovision Song Contest’ and made it with the 24 finalists with 2 songs, ‘Catch 22’ and ‘Touch Wood’. At this point Amber started to get well-known for her particular style and voice. Her career and emerging opportunities never seemed to disappoint.

In 2012, Amber was the second runner up in the ‘Malta Eurovision Song Contest’ and this was the start to an amazing year for her. Later on during the year she was asked to accompany Kurt Calleja as a backup singer in the ‘Eurovision Song Contest’ in Baku, representing Malta with the song ‘This is the night’ and later that year sang a duet with the world-renowned Joseph Calleja at one of his concerts. Amber describes both experiences as being the highlights of her life, it was a huge honour for her, “They were both life changing experiences” she says.

Amber has always given voluntary work a priority. In August 2013, she spent 3 weeks in Tanzania which was an opportunity to contribute and to experience something which would have a huge impact in her personal life. In August 2014, she also spent 1 week in Reggio Calabria where she helped young kids in need. She describes voluntary work as a give and take experience.

Her favourite music genres are Jazz and Blues. She looks up to Etta James and Beyonce so much, as far as how they have handled their career and personal life. She is also a huge fan of their music.

She believes that the Eurovision Song Contest is a very good platform for all the local artists and it is something to look forward to every year. This is Amber’s 5th year participating in the Malta Eurovision Song Contest. In 2012, Amber placed 3rd with the song ‘Answer with your eyes’. In the past 2 years, she placed 4th with the songs ‘ In Control’ and ‘Because I have you’ respectively. In 2014 she also joined the well-known ‘Animae Gospel Choir’.
Amber believes that in order to achieve and succeed one must remain grounded and passionate in what he does. Till this very day Amber is still working hard to achieve the very best in various projects, and whatever comes her way.