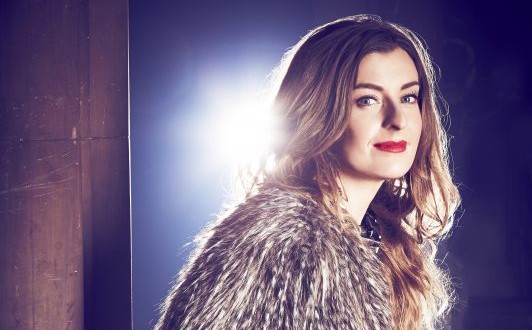 United Kingdom’s entry for Eurovision has just been presented!

As ESC+Plus.com published yesterday, Molly Smitten-Downes has been internally selected by BBC and she will represent the United Kingdom with her song “Children of the Universe”:

Molly, aged 26, from Leicestershire, was discovered throughBBC Introducing and invited to compose and perform a song especially for the competition.

Performing for the UK as her artist name Molly, she has been singing and composing songs for over ten years and has become widely recognised within the music industry and live music scene. In 2012 she was awarded Best Urban/Pop Act at Live and Unsigned, has performed at numerous festivals including Sundown and in 2013 won Best Song at the Best of British Unsigned Music Awards.

The song Children of the Universe is an anthemic, uplifting track specifically written with live performance in mind. The music video was recorded live to showcase Molly’s incredible vocal ability. Molly says: “I’m so excited for everyone to hearChildren of The Universe. I’m so happy with it. To represent the United Kingdom in such a huge competition, not only as a singer and performer but as a songwriter is an unbelievable honour. I hope I can do us proud”.

Katie Taylor, Head of Entertainment and Live Events, says: “I couldn’t be happier that Molly is continuing her musical journey with the BBC. She has the chance to make her mark by flying the flag for the UK and be appreciated by millions of people throughout Europe.”

Executive Producer, Guy Freeman says: “BBC Introducing provided us with an extraordinary range of talent to explore and in Molly we found the perfect combination of contemporary song writing and real vocal quality. Her enthusiasm for the project is infectious and I’m sure that she’ll gain huge support on the journey to Copenhagen.”

On Sunday, fans were invited to attend a top-secret event in central London. They all knew what it was about, but other than that they had no clue who the artist was or what the song was called.

They were told to arrive at 17:30 sharp in order they would be in place for the exclusive recording of a music video.

The venue is, in fact a disused church, which has been kept in use for events like this one. The high ceilings, impressive balconies and stunning stone features make it the perfect setting for a music video. On stage stood a drum kit and four microphone stands. Above the stage, strings of lights were dangling and right behind were large lamps and spotlights – simple yet effective.

On, arrival it soon became clear that the vast majority of people in the audience had no clue what was happening. They had just obtained free tickets from an events website and were up for seeing a bit of live music. It was only when the BBC’s Scott Mills appeared on the rear balcony to record a VT to camera that the penny dropped. They were all there to be part of the music video for the United Kingdom’s 2014 Eurovision Song Contest entry.

Soon afterwards, they were introduced to the lady herself, Molly, who came on stage to rapturous applause.

Molly performed Children of the Universe five times and in different configurations. Each time it was performed live, and performed well. The crowd chanted her name after each performance and Molly was quite obviously very moved by the whole experience.