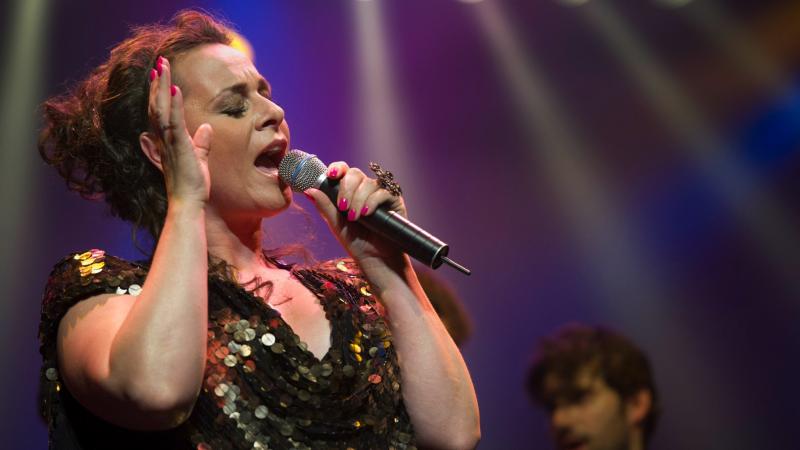 AvroTros has just confirmed the rumours, Trijntje Oosterhuis will represent The Netherlands at Eurovision 2015 in Vienna!

Eurovision 2013 representative Anouk will be the face behind her Eurovision entry, Anouk achived a 9th place in Malmö and she had a massive support from fans around the world.

In 1990 she formed the band “Total Touch” with her brother Tjeerd Oosterhuis and, in 1991, they participated in the Grote Prijs van Nederland, the most important amateur musician contest in the Netherlands. Trijntje got the opportunity to tour with Candy Dulfer in 1994 after collaborating with her on the album Big Girl. Originally the tour was supposed to last six weeks; however, it became a two-year tour around the world.

Total Touch was offered a record deal in 1995 and the debut album Total Touch was released in 1996. The first single, “Touch Me There”, became a summer hit and went Platinum, selling over 100,000 copies in its first month – despite only peaking the Dutch charts at number 14. The next album This Way became their first number-one album and was equally successful, although the album was not well known internationally. In 1999, they took a small break, and Trijntje Oosterhuis released a live album with covers of Stevie Wonder. In 2001, the group decided to go their separate ways, with Tjeerd wanting to focus on production and songwriting and Trijntje wanting to launch her solo career.

In March 2003, Oosterhuis’s debut solo album, Trijntje Oosterhuis, was released and met with moderate success. The album consisted mainly of ballads and presented her as a diva. Trijntje personally has a fondness for Jazz instead of pop ballads, and in 2004 she therefore signed a record deal with Blue Note and released the live album Strange Fruit, consisting of Billie Holiday and George Gershwin covers. The album received critical acclaim, and Trijntje finally managed to achieve fame beyond her home country.

Her second jazz album called The Look Of Love (Burt Bacharach Songbook) was recorded with Burt Bacharach, who plays the piano on a two tracks and was released on 20 November 2006. The new album was certified Platinum on the day of release for having shipped more than 70,000 copies. In December 2006 Trijntje toured with the Metropole Orchestra performing covers of Burt Bacharach and Christmas songs.

In 2007, she released a second volume of her collaboration with Burt Bacharach entitled Who’ll Speak For Love, with Bacharach again playing piano on three tracks. In 2008, she released a CD and DVD of an acoustic concert performance with guitarist Leonardo Amuedo, entitled Ken Je Mij.

In September 2008 she was one of the special guests at the Symphonica in Rosso concert in Arnhem, starring Lionel Richie. During this concert she sang the duet “Face in the Crowd” with Richie, which performance is included in Richie’s album Just Go.

In 2009 and 2010, her song “What the World Needs Now” was the theme for Brazilian soap opera Viver a Vida made by Rede Globo.

In early 2011, Oosterhuis released the album Sundays in New York. The CD was given away free to lucky readers of the Saturday 15 January 2011 edition of the Dutch newspaper AD.

A year later, in January 2012, Dutch singer Anouk made two videos of her and Trijntje working together in a studio available through Twitter and Facebook. Initial assumptions were made that Anouk and Trijntje were recording a duet for Trijntje’s next album. Soon after, it was announced that Anouk was writing songs for the album and producing it. The new album, named Wrecks We Adore, was officially released on 13 April 2012. In 2012, Oosterhuis replaced Angela Groothuizen as a coach on the third season of The Voice of Holland alongside Nick & Simon, Roel van Velzen and Marco Borsato. Her final contestant, Leona Philippo, reached the final and won.