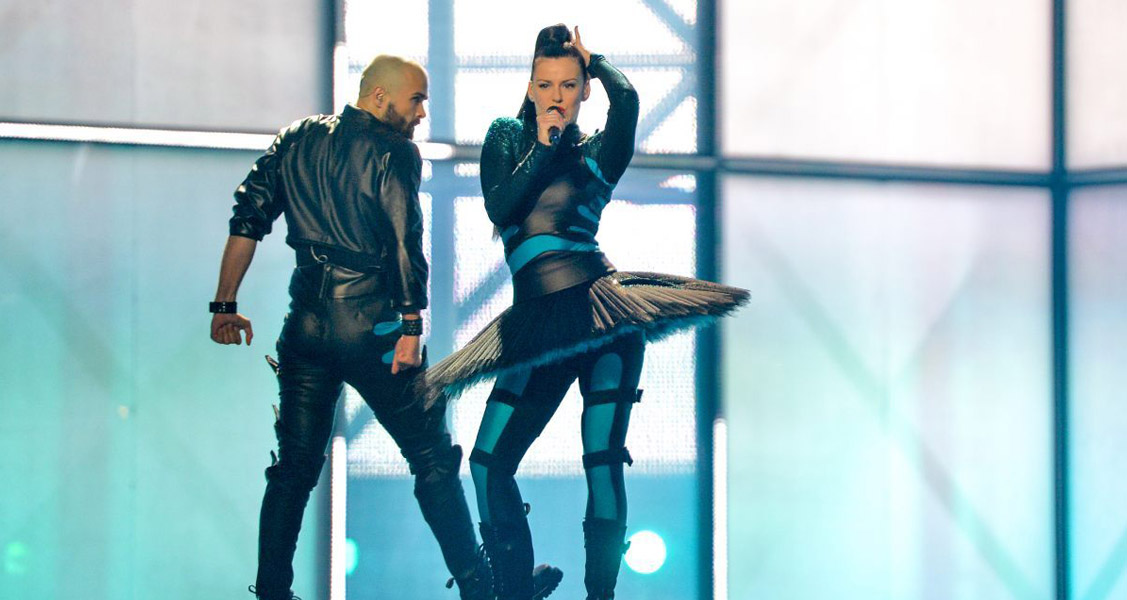 For people of my generation, ‘the future’ has turned out to be a bit of a disappointment. According to experts’ predictions and prophesies, by now we really should all be travelling around in hover-pods and popping over to holiday homes on Betelgeuse B for our winter mini-breaks. In fact, it wasn’t just the experts who raised our expectations. Pop music, too, has also been in the habit of regularly painting pictures of the kind of future that would one day await us all. But not so much at the Eurovision Song Contest.

I may be mistaken, but as far as I know the word ‘robot’, for example, has never appeared in any Eurovision song. Even entries like Latvia’s ‘Hello from Mars’ (2003) flattered to deceive, as we say in the UK. That was a song that fooled me into thinking it was about to portray the high-tech, sci-fi future that was just around the corner. Surely this entry would be the Eurovision equivalent of Boney M’s ‘Nightflight to Venus’ and portray a space-based future where interplanetary travel was normal and Artificial Intelligence ruled the roost – saving all of us the trouble of thinking for ourselves. But no. I think it was just a love song. And not even a Sheila B. Devotion ‘Spacer’-type love song, either.

To my mind, it’s strange that very rarely in Eurovision history will you find a song that genuinely looks forward to the future in a full-on way. The remarkable Slavko, for Montenegro last year, at least mentioned a rocket to the stars, Venus and Mars in ‘Space’. But I don’t think he had actual space travel in mind, to be honest.

No, in the Eurovision Vaults there’s a depressing shortage of proper equivalents of the Kraftwerk classic ‘We Are the Robots’ or even of David Bowie’s ‘Space Oddity’. And I’m not really sure why. Take the mighty Kate Ryan, for instance. She did a great song called ‘Robots’ a few years ago. But not at Eurovision. No, for Eurovision she went with ‘Je t’adore’, of course – a song unjustly jettisoned at the Semi-Final stage in 2006, and very much based in the present day. When it comes to the ESC, the nearest we’ve been in recent years to a dissection of cutting-edge technology is ‘The Social Network Song’ in 2013 – the first of Valentina Monetta’s three-in-a-row run for San Marino. No mention of algorithms, though. Nor should we forget Lena’s reference to a ‘Satellite’ in 2010.

But the REALLY odd thing is that this lack of future focus at the ESC is only really true of the songs themselves. In terms of costumes and staging, Eurovision contestants have almost been falling over themselves to dress up as if they’re heading for a Gary Numan Fanclub Convention. An excellent example was Michalis Rakintzis and his entertaining entry for Greece back in 2002. The performance has justly gone down in Eurovision history as a classic of its kind. With their automaton costumes and robotic movements, Michalis and the boys really look like they’ve just transported down onto a derelict spaceship to try to salvage some dilithium crystals. But what of the song? Well, in terms of genuinely futuristic content, ‘S.A.G.A.P.O.’ scores nul points, I’m afraid. It’s a love song. No more and no less.

The same can be said for a whole stack of other acts: futuristic presentation, but a strictly non-future-themed song. Think of Verka Serduchka for Ukraine in 2007. All that silver! And recall 2013, too. Here we were treated not only to Montenegro’s fine entry (one of my favourites that year), Who See’s ‘Igranka’, but also to Cezar from Romania, whose impressive falsetto made quite a splash with the excellent ‘It’s My Life’. Cezar’s costume would, I think, have been absolutely ideal for an intergalactic villain in a movie called something like ‘A Taste of Space: Episode Six – The Attack of the Massive Sparkly Collars’. But what were those two songs actually about? Well, ‘Igranka’ (despite Nina’s 25th-century optical gear) was about a party and ‘It’s My Life’ was about, well, Cezar’s life. Again, nothing about space stations orbiting minor moons of Neptune.

And yet. Maybe one day! After all, it was only two years ago in Stockholm that the Second Semi-Final brought us what was dubbed by some ‘the Robot Riverdance’:

I may not be able to see the future. But here’s a prediction – someone’s going to come to the ESC very soon who won’t just be dressed for tomorrow. They’re also going to tell us exactly how tomorrow’s going to turn out and give us nothing less than a blueprint for the future of mankind. And I’m pretty sure that future’s going to be sparkly.