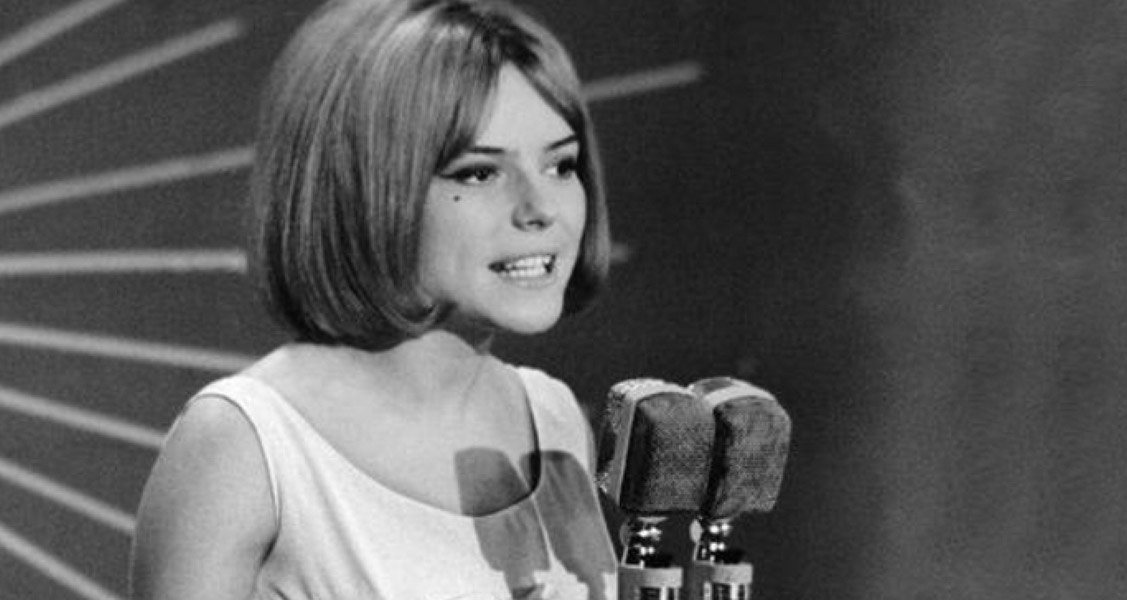 I miss Luxembourg. Incredibly, this year is the silver anniversary of the Grand Duchy’s last appearance at the Eurovision Song Contest. It’s twenty-five years since this tiny country with a huge Eurovision pedigree left the stage, vanished into the mist and never came back again. And in the wake of the recent sad death of France Gall (pictured above), I didn’t want to let this landmark pass uncelebrated. What’s more, I still keep my fingers crossed that Luxembourg will return one day – perhaps even ‘undercover’, pretending to be another country and then, after they’ve seized their sixth ESC victory, revealing themselves to a shocked, stunned and delighted world…

You see, Luxembourg really built up some impeccable credentials during their four decades of Eurovision involvement – and not least because the country was one of the brave band of seven pioneers that made it to Lugano in Switzerland for the first-ever ESC back in 1956. Regrettably, Luxembourg is the only one of those originals that isn’t still part of the club. Of course, following ‘relegation’ in 1993, we were sure Luxembourg would be back very, very soon. Instead they disappeared into Eurovision oblivion – like when a ‘big’ football team gets relegated at the end of a season but you’re certain they’ll soon bounce back to the top flight. But then they don’t. Yes, Luxembourg are the Nottingham Forest or Dukla Prague of the world of Eurovision.

But what an impact they made while they were in the mix! Indeed, thanks to their five wins chalked up between 1961 and 1983, Luxembourg are STILL joint third in the all-time Eurovision winners list, behind only Ireland and Sweden. Make no mistake – here was the little guy that dared to square up to the big boys in the playground. And regularly came out on top. David beats Goliath. The Greeks beat Xerxes. Rocky beats someone bigger and younger than Rocky. You know the story. It’s a great script!

Interestingly, none of those quintet of wins was secured by a Luxembourg national. As a small country, there was little alternative to spreading the net widely when scouting for Eurovision talent. Solange Berry, Lara Fabian and the legendary Plastic Bertrand from Belgium; the great Nana Mouskouri and Vicky Leandros from Greece; Spain’s Baccara (both of them) – the list goes on. And on. And on. In fact, only eight Luxembourgers ever represented Luxembourg at the Eurovision Song Contest. This may conjure up mental pictures of oil tankers flying the Liberian flag of convenience, but personally I think it showed admirable creativity and problem-solving capability. You simply can’t argue with a transferrable skill.

And what a legacy of Eurovision memories Luxembourg left us with! Highlights obviously include the back-to-back victories in 1972 and 1973 by Vicky Leandros and Anne-Marie David. Plus, naturally, the magnificent win achieved in 1965 by the late, great France Gall. (I’ll be returning to her remarkable success with ‘Poupée de Cire, Poupée de Son’ in a future article.) But there are also many less obvious and slightly curious hotspots to acknowledge, such as 1985’s free-of-charge trilingual language lesson ‘Children, Kinder, Enfants’. Nor should we forget the somewhat oddly named 1974 entry ‘Bye Bye I Love You’; talk about mixed messages.

But as I rummaged through the archives, I decided to share with you the following three examples of Luxembourg’s unique contribution to – and indelible mark on – the Eurovision Song Contest. The first needs no introduction. So I’ll introduce it anyway. Anne-Marie David’s ‘Tu Te Reconnaitras’ is, for me, one of the absolute pinnacles of Eurovision’s pre-ABBA era – a fantastic song that proved too good for, among others, the UK’s Cliff Richard whose bandy-legged bop propelled ‘Power to All Our Friends’ (with its curious rallying cry of ‘power to the bees!’) to third place in one of four ESCs actually held in Luxembourg:

For our second clip – well, how can I leave this one out? I was CERTAIN this was going to win back in 1980! Scientists have actually proved that this is one of the ten catchiest songs of all time. (Not really – apparently they had their hands full trying to capture cosmic neutrinos.) So how it ended up coming ninth (out of nineteen) defies explanation. Maybe the guy in the penguin outfit should take some of the blame? I’d like to think he got over this disappointing result by making himself available for children’s parties:

But let’s sign off this article by (appropriately) looking at how Luxembourg signed off from their Eurovision journey – although none of us knew it at the time. (And we live in hope.) Here’s their valedictory 1993 entry ‘Donne-moi une Chance’ by Modern Times, notable for delivering (i) a textbook example of a beautifully executed yet fundamentally unnecessary  ‘singer’s walk-on’ right at the start of the song, and (ii) plenty in the way of big hair.

Small country, big hair, huge legacy – that, for me, is Luxembourg’s Eurovision story in a nutshell.

Thanks for reading! It’s been emotional.