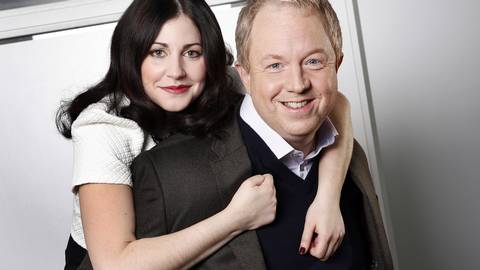 The press conference and announcement of host(s) of upcoming edition of Melodifestivalen 2014, Swedish national final to select Sweden’s entry for Copenhagen is about to start right now.  Martin Österdahl, a member of production says Edward af Silen will not write the script as previous years. He also points out that none of the possible options listed in the betting odds is the host.  Josephine Bornebusch is the name mentioned in Swedish newspaper Aftonbladet.

Christer Björkman has come on press conference stage. He says the announcement has managed to be kept secret for everyone. There are two hosts. Both comedians. Both from Skåne (the region where Malmö, the host city of Eurovision 2013 is located)

Anders Jansson is the first name.

Nour El Refai is the second name.  She was a sidekick of Kristian Luuk and was interviewing the artists backstage in the contest in 2008.

Henrik Jonsson says we’re about to expect new things. Both Henrik and Christer say we’re on the “year 0”, when everything will start all over again.  Nour says she hopes the viewers will remember the 2014 contest as a fun year.  Nour says the hosting would be a mix of Darth Vader and Stewie in Family Guy.

Now both hosts are to be interviewed by Gustav Dahlander from SVT first and then by the rest of the media.