And shockingly, Lolita Zero is back! LRT introduced a shocking and unexpected wild card round on their website after last week’s Eurovizija broadcast. Unsurprisingly, the fans came out for Lolita and the number of finalists for Lithuania’s national final went from 6 to 7 and everyone who just got a bit less sure of themselves in the process, one imagines. 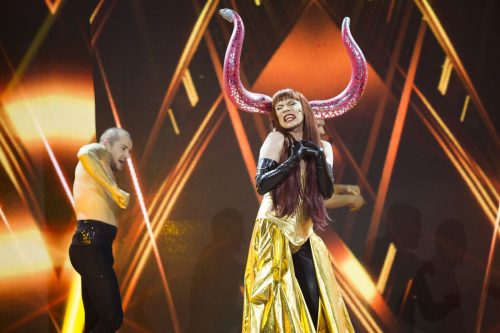 Last week had already done enough to shake up the public’s mind of what would transpire in the Eurovizija finale. Fusedmarc stole the lead from Aistė, Kotryna put herself on the map, Paula found wind rushing into her sails via the televote, Greta tumbled down the leader board, and Gabrielius cut his hair. This year has been LRT’s most watched season of Eurovizija, and the quality of the show’s performances more than likely added to the interest. Lithuania, it seems, is invested in Eurovision and doing well.

To that end, they were filming the whole thing from start to finish this year, not just the performances, but behind the scenes and what was happening technically. One wishes that subtitles could be added to the documentary airing on LRT.

Adding Lolita Zero back after her staggering televote numbers assures that she will be placing better than a few contestants this week, but how many? Could she conceivably win the whole thing? The judging this week is being done live, so there isn’t time to deduce their thoughts on the matter as we did the week she was cut from the competition. It was fairly obvious the judges didn’t care for the song, rightly so, and weighted the song slightly so that even with a high televote, she was unable to stay in the qualifying margin. The song is the same, but now the judges have to know that her popularity among the natives is very high—will they change their views to appease the increasing viewership?

It seemed all season, as in previous years, that most of the judges are very serious about the search for the best song. This year, the judges, Lithuanians, and fans alike all see this year as a high mark for the competition. So what then to do with an act that has a lot of interest, but less of a song and more of a schtick? To be fair, any of the remaining songs have all been praised enough by the judges that any choice would probably leave them feeling like a good song was sent to Kiev. Ramunas Zilnys and the others have been VERY vocal with songs that weren’t up to par….with hilarious effect.

Everything boils down to picking a song or an act. There isn’t a right answer. Lolita Zero could easily go on to do amazing things at Eurovision…and we’ve seen drag performers do well in the past. However, Conchita had a message. “Get Frighten” is hardly “Rise Like A Phoenix” as far as personal mantras go, and without that you end up DQ.

On the other hand, for a country that has only placed in the top 10 twice…let that sink in…and whose highest scoring song, LT United’s “We Are The Winners,” is probably more of a novelty song than anything, surely given a fine crop of songs the goal would be to send the best song and hope to win. Plus, given the current slate of competitors, this really would be the time to strike, with no Månses, Franses, or Loreens flying around. A lot of Eurovision baggage could be left on the ground with a victory in Kiev.

One of those individuals will win Eurovizija 2017 and be heading to Kiev after today’s show. It will be an exciting showdown and important time for Lithuania as a Eurovision competitor and it all goes down LIVE starting at 20:00 CET on the LRT feed or on our ESC+Plus Live Feeds.