The Ukrainian national final for Junior Eurovision 2014 has just ended and Sympho-Nick will be waving their country’s flag in Malta. Sympho-Nick will perform the song “Priyde Vesna” (Spring is Coming) composed by Mikhail Nekrasov representing Ukraine on November 15:

Sofiya Kutsenko, Marta Rak and Amalia Krymskaya are the members of the trio Sympho-Nick, formed by the winners of the Music Academy of Eurovision 2014. The girls have been coached by the Ukrainian representative at Eurovision 2013 Zlata Ognevich and their song is composed by Mikhail Nekrasov, the face behind some Eurovision entries like Gravity (2013) and the Eurovision 2004 winning entry “Wild Dances”.

Mikhail Nekrasov explained to Teleprostir the origin of the trio’s name: it comes from their voices and the music, they reflect classic vibes and modernity. The song contains “symphonic” arrangements and “nick” just refers to the internet usernames which reflects the modernity.

The winner has been chosen among 18 finalists by a mix of jury and public vote (50% – 50%) during a two-hour live show broadcasted from Artek – Carpaty in Bukovel (Ukraine). Eldar Gasimov and Gaia Cauchi have formed the professional jury together with Aleksandr Zlotnik, Ruslana Pysanka and Andre France.

SMS voting results can be found below: 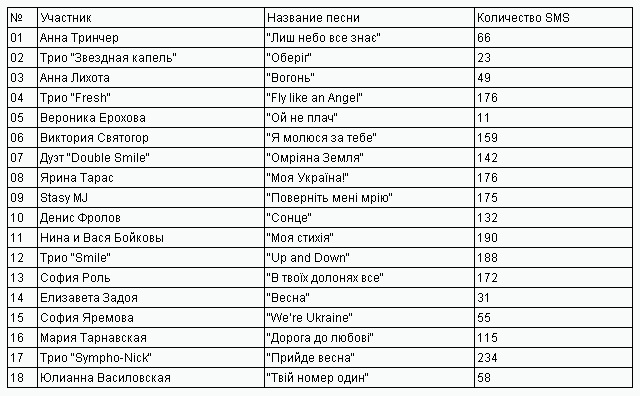 Eldar Gasimov has premiered her new duet song with Zlata Ognevich (ESC Ukraine 2013) “Ice and Fire”, as well as Gaia Cauchi has been performing her Junior Eurovision 2013 winning entry “The Start” (Remix). Ukrainian representative at Junior Eurovision 2013 Sofia Tarasova has also been among the guests of the show.

What do you think about the Ukrainian entry for Junior Eurovision 2014?