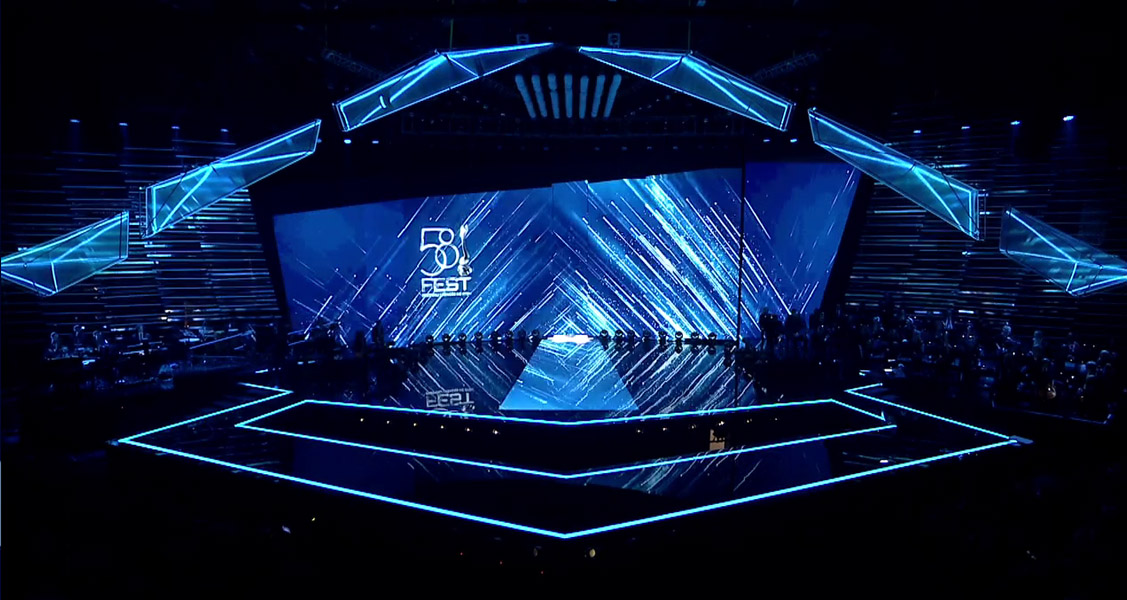 Festivali i Këngës continued its 58th edition last night with a second semifinal in which RTSH tried — and succeeded, in part — to silence the criticisms that arose during the first evening. Although the official programming of RTSH1 indicated that the gala was going to start at 20:30, for reasons we do not know its start was delayed 34 minutes. 34 painful minutes in which, as the followers are accustomed to, there was only external advertising and self-promotion ironically also for 34 minutes.

As soon as Alketa Vejsiu makes his first appearance, we see that one of Thursday’s main problems is fixed and the microphones are finally working properly, without any echo. The introduction of the format and the jury lasted approximately ten minutes — special mention of self-criticism: She acknowledges that at the first gala there were times when she spoke too quickly and that that hindered the development of the gala; Tonight she will strive to avoid repeating it.

Again, the running order published several weeks ago has nothing to do with reality. It will be Robert Berisha, Kosovar artist with one of the most interesting songs musically, who opens the show; We could describe his song as a hybrid between Latin pop and an orchestral ballad. The song (entitled Ajo nuk është unë, esp. “She is not me”), is enough for her to be on her own, but you can perceive the lack of charisma of Robert, who seems to be at the mercy of the stage and ends up leaving indifferent.

Wendi Mancaku, being only 18, continues with her ballad Ende (eng. «Still»). Wrapped in a blue dress, she plays her role flawlessly on piano and hints that, despite her young age, she is very aware of what she does and how she does it – as a fact, in 2018 she was the winner of the best category revelation artist at the Kënga Magjike pop festival. Although the sound of the audience does not have an especially important role in this performance, we can begin to see that the production has managed to solve another of the most notable problems in the first semifinal and you can notice a link between the public and the public. artist — wrapped in a sea of ​​lights and a cozy atmosphere.

Third, Kastro Zizo with a very outstanding performance in which he wears a suit and a cane. Although – understandably – at first glance it might seem that everything is meaningless, in Kastro’s own words: “Asaj (esp.” Yours “) is dedicated to my mother, deceased, so it is very personal, but also There are many people who have lost their mothers and will be identified. […] In acting I will appear as a man who travels in time, coming from the past to reveal secrets to mention in history ». Kastro’s curriculum is widely noted, dominating the stage with impeccable charisma and a very peculiar vocal style completely own.

Tiri Gjoci takes the stage with Me gotën bosh (esp. «With an empty glass»), ballad rock about pain and the use of alcohol to mask it. We do not have much to describe about the performance: Tiri is correct, without any particular attention, and the song reaches its climax in the final chorus after a short guitar solo.

Arriving at the midpoint of the gala, it is the turn of Era Rusi, probably one of the biggest surprises of the gala. Triple winner in Kënga Magjike and former participant of the Festivali i Këngës in the 2000s, she brings us one of the most energetic performances with Eja merre (esp. «Let’s go!»), Pop with ethnic influence — there are people who have noticed similar with the candidacy of Elvana. In the same way, however, the action takes a long time to capture interest and it feels empty, bare. Also, the orchestra contributes little to the song and feels very old-fashioned here.

Having performed the first five performers, it is time for an advertising break (with the fifteen sponsors!) That is close to ten minutes. Alketa greets us again and it’s time to give way to a Eurovision veteran: Olta Boka. In 2008, when he was only eighteen, he won at the Festivali i Këngës 46 with Zemrën e lamë peng, a candidacy that would quickly become one of those preferred by Eurovision fans. His candidacy this year, however, is far from the style of more than a decade ago.

Botë per dy (esp. «A world for two») is a sentimental ballad, of the type that usually frequents this type of festival. Under a white cloak, Olta demonstrates vocal impeccability accompanied by a man inside a glass box (will this concept sound to Christer and Dimitris?) That symbolizes the lyrics of the song. All this receives an epic look through the orchestra, raising instrumentation.

Already in the seventh performance, comes one of the most anticipated nominations by many of the Eurofans: Kutia e Pandorës (esp. “Pandora’s box”), rock theme written by Eurovision alumni Eugent Bushpepa and interpreted by Valon Shehu. Where to start ? From the beginning there is an almost perfect instrumental, with a perfectly coordinated drums and receiving a very particular atmosphere with the powerful voice of Valon and the orchestra — an applause to the metal wind and the strings. If there is something criticizable, it is probably the little movement of Valon, who has been able to bore on certain occasions or sin as generic.

After this jug of cold water in the people who were sleeping with the gala it is time for another of the big favorites: Arilena Ara and her «Grito» or «Lamento», Shaj, composed by the Macedonian musician Darko Dimitrov (using the opportunity to have foreign writers, the restriction having been lifted). At first glance, Arilena’s outfit is clearly highlighted — the photos and videos speak for themselves. For its part there is nothing to reproach, it is another great sample of the voices made for the live that abound in Albania and at no time lacks emotion. However, and we hope it will be fixed by Sunday, the orchestra has suffered from lack of coordination at some times — probably due to address errors. After the performance, Arilena receives one of the biggest cheers from the public, who asks her to return to the stage after leaving (and she does!) – the perfect time to go to publicity.

As soon as the spotlights return to the Congress Palace, we go on to the penultimate intervention with Eli Fara and Stresi, a very peculiar mixture: Eli Fara is a pop star of the Albanian dictatorship while Stresi is a 32-year-old rapper. The theme combines an ethnic refrain with verses in rap and does so in a way that is especially interesting. The performance depends minimally on the orchestra, with most of the instruments being handled next to the two protagonists; Both show no weaknesses live.

And, reaching the end, it is the turn of another star: Gena. Gena’s proposal is a patriotic theme, which, as the singer himself defended in interviews and in the post-festival program, is intended to inspire the entire Albanian population: Shqiponja e Lirë (esp. «Free Eagle»). From the first second with music, Gena’s voice encourages the entire venue and the viewers to keep up with their eagle. Accompanied by ten dancers and a choreography designed to be spectacular, Gena does not fail at any time and makes the whole audience enjoy constantly (and finally we can listen to the audience!), Encouraging him to join the bridge of the song. After all, the spectators cheer for almost half a minute and give the highest ovation of the contest so far.

After the performances, a 5-member professional jury panel has decided that the following entries will take part at the Albania final:

The results of Festivali I Këngës 2019 are up to a jury panel which features Albanian professionals and international members, Swedish producer Christer Björkman, Greek composer and songwriter Dimitris Kontopoulos and the Icelandic Head of Delegation Felix Bergsson.

Festivali I Këngës 2019 will conclude on Sunday 22 live at Tirana’s Palace of Congresses, where Eleni Foureira will perform as a guest of the show.