Albanian artist Elhaida Dani, winner of the first series of the ‘The Voice’ in Italy has just repeated success and has been awarded with the right to represent Albania in the 60th edition of the Eurovision Song Contest, taking place in Vienna on May, 19,21,23.

Tonight, 18 acts took part at the 53rd edition of the acclaimed contest in Albania, Festivali I Këngës which reached its edition #53 this year. 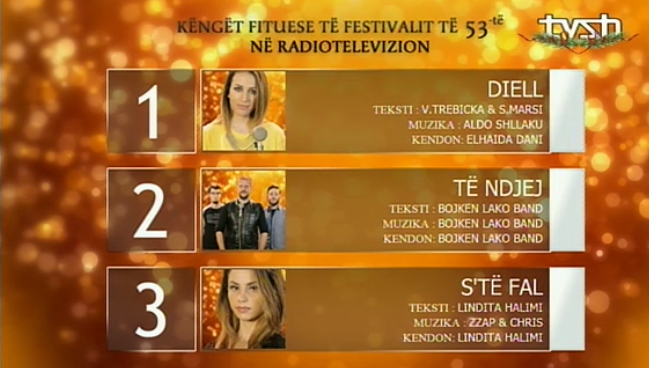 The song is called ”Diell” (Sun), originally performed in Albanian language as could have been seen tonight and still unknown whether the song will suffer any changes regarding language issue or arrangements or will formally keep similar arrangements for the studio version. We also want to inform you Elhaida won our POLL with 165 points, where a total of 22 people in 24 hours decided to cast its vote. But for now, everything has been said, we just only congratulate the winner for such an honor. The winner was only decided 100% by a jury panel.

Listen to Diell (Sun), below:

Stay tuned for further details regarding the Albanian participation in Vienna!

12 thoughts on “Elhaida Dani wins FiK 53 and will represent Albania in Vienna!”