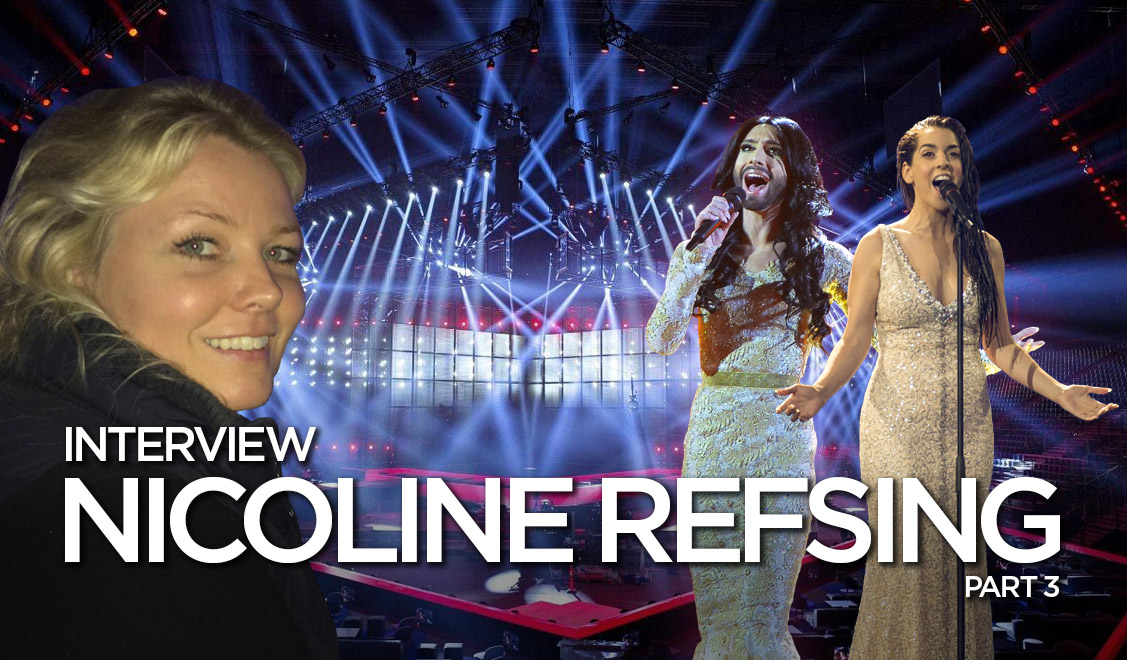 She was not only meant to do it for Blas Cantó in Rotterdam, and she might have just been a few points close to the victory with Dami Im’s ‘Sound of Silence’. This lady won our hearts even some years before this happened. This time it was not just about a mere performance, but an entire show. After the first and the second episode, we proudly want to introduce how Nicoline Refsing, one of Denmark’s best and most recognized creative and artistic directors was appointed to be the person in charge of the visual story of the Eurovision Song Contest 2014 in Copenhagen.

More than nine hours of non-stop audiovisual quality and advanced technology on TV, which truly represents a big challenge from the beginning. She took it and accomplished the task way more than efficiently. It all started even before Emmelie De Forest got her well-deserved victory in Malmö. We go seven years back in time to guess how it happened. Sometimes, great and promising things just start with a phone call. This was one of those cases. “Keep an eye on it because she is way ahead of everyone on the bookies!“, this was the message Refsing got from Kasper Lange, who would eventually become the Lightning Designer, referring to Emmelie.

Everything became clear when the Danish delegation took the trophy and the B&W Hallerne was chosen as the venue for the 2014 event. It was a huge challenge but teamwork paid off its way to success when Per Zachariassen, the show director, approached her to be on board and start working with Claus Zier‘s stage sketch. She was not alone, as she received help from individual content houses that were hired for the occasion.

Nicoline highlights how important it is to “pre-visualize” what you are actually supposed to do. It might just sound stupid, but “endless visualizations” avoids any risk of mistake when all the elements would come to reality. “It is so much cheaper to notice you have made a mistake before going on-site“, she explains. From the start, ESC 2014 really looked like a very demanding and ambitious production, so everyone on DR’s team took it this way in order to deliver its best.

If there is anything which she must be involved in as a Creative Director, that is just the most complex part of the Eurovision Week, where the team tries to uplift every song on stage and make every performance special and unique. Asked about Spain’s Ruth Lorenzo diamond-shaped structure and how difficult it was to meet all the guidelines proposed by the delegation, Refsing admits she thought the Spanish star could win the competition: “There was a few of really special and good performances, and she was one of them“.

Yet again, Spain was again surrounded by a bunch of drama due to Ruth’s wish of bringing water on stage and reflect elegance. “I thought she could be stronger is she’d created a bit more like a diva performance. I remember talking to her sister during the first rehearsal about the dress and how it would look“. The rest is all history, as the singer went on to a wedding boutique in Downtown Copenhagen and chose a model 2.100€ worth for Saturday’s Grand Final. This was Spain’s last top 10 placing in the competition up to date.

On the other hand, Nicoline just assisted the Austrian team as they had a “very specific script“. “They knew exactly what they wanted“, she believed. Rockart Design just worked on making it stronger, with the lightning playing the biggest role in the performance. Conchita Wurst ended up winning the competition with ‘Rise Like a Phoenix‘ and took the contest back to Vienna after a 48-year gap.

Nicoline Refsing has a long prolific career when it comes to artistic design in the audiovisual field. Under her self-established company Rockart Design, This Dane, based in London, has worked for many international and popular artists like Pink, One Direction, ‘The X Factor’ most successful contestant ever, Leona Lewis, and even no other than Queen Elizabeth! It is no surprise that she describes it as a “lifetime” dream.

This TV professional felt in love with “the glitter” when she was a child and recalling “vividly” the Danish victory at Eurovision 2000 in Stockholm, she started thinking that she would love to work for Eurovision as she grew up. 14 years later in time, that’s when her path through the Eurovision Song Contest history started. Having been appointed as theartistic and creative director for Eurovision 2014 in Denmark and designed the stagings for Aminata, Dami Im, Timebelle and Brendan Murray, Refsing was subsequently approached by Spanish broadcaster RTVE to make up Melani Garcia‘s ‘Marte‘ stage performance at Junior Eurovision 2019 in Poland.

Trusting her previous work, the Spanish public broadcaster RTVE selected her to do the same task for Blas Cantó’s ‘Universo‘. Halfway through the rehearsals in Madrid, the pandemic took over the progress and all the team resigned to continue working as the lockdown emerged. Eurovision 2020 was subsequently canceled and now, she is just waiting for negotiations to keep going, and perhaps, being again the one appointed for 2021. Time is what will just tell.