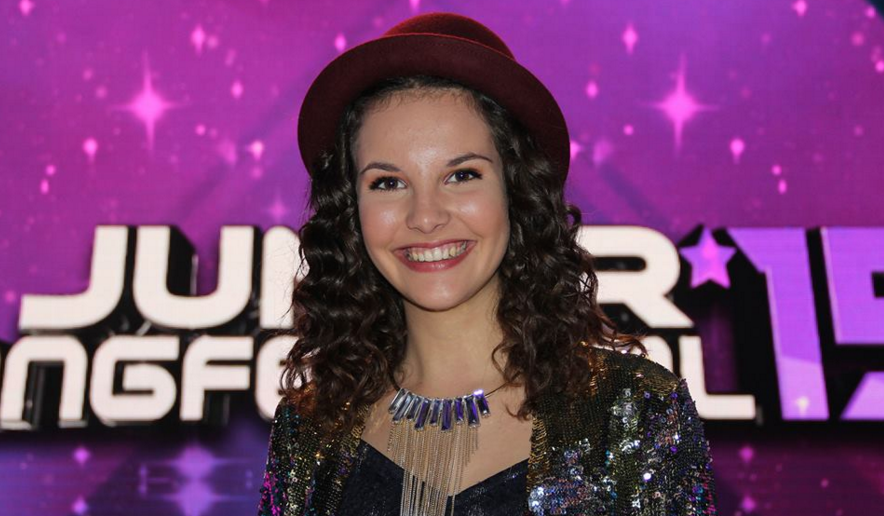 Another interview is coming, this time from one country which has never missed any edition of Junior Eurovision: The Netherlands!

Check what Shalisa has told us below:

Hello Shalisa! First of all thank you so much for giving us this interview as Dutch representative at Junior Eurovision 2015 and congratulations on winning Junior Songfestival 2015!

ESC+Plus: How did you feel when you were named the winner of Junior Songfestival 2015? What does being the Dutch representative in Sofia mean for you?

At first I could not believe it. The other competitors told me I won and that I had to run to the stage. The professional jury, the junior jury and the Dutch viewers all gave me 12 points. When I realized I won, I was happy and speechless and had to cry!

I’m honoured and proud to represent the Netherlands in Sofia.

E+: What impelled you to take part at Junior Songfestival? Could you tell us about your experience in the contest?

Writing my own song on my piano was a challenge for me. When I had an idea for a song I worked it out and applied for the audition. It felt like a roller coaster. We had a fantastic group and we became friends. We learned a lot and did workshops with great Dutch artists and professionals.

E+: When did you compose your song “Million Lights”? How did the idea come to your mind?

Million Lights was composed in February 2015. I was sitting on the couch were we have a roof-light. From that spot you can see the stars in sky when its dark. That’s were a Million Lights came on my mind.

E+: Can you tell us what your song is about? What is the story behind the lyrics?

My song is about two people who are in love but cannot reach each other because they live thousands of miles away. They both see the million lights up in the sky. Everybody sees the same stars so that’s what connects them and they feel close to each other.

E+: Will you revamp the song for the Junior Eurovision Song Contest or you will keep the original version?

The final version was perfectly produced by Hansen Tomas. It’s even listed on Tipparade so I don’t think a change is needed. People like the song as it is.

E+: It is too soon maybe, but have you already decided about how your stage performance will look like? Will you carry dancers with you? How about the costume you will be wearing?

I think I’ll bring the piano 😉 and a big smile of course. My dancers will come with me too.

I’m 15 years old and live in Wognum in the North of Holland. My favourite music style is soul and pop music. I also love the disco music from the 70’s and 80’s. My favourite school subjects are Music & Culture, English, French and Spanish. I love to make music and play the piano.

When I was 8 years old I started to sing. I participated in a talent show for kids and was selected for the national finals on TV. On my 12th birthday I did Blind Audition at The Voice Kids season 1. A famous Dutch artist, Marco Borsato was my coach.

Between The Voice Kids and the Junior Song Contest I went to a course of the Academy of Music in Amsterdam and worked on my technical skills to become a better vocalist. I was also trained in music theory.

E+: What do you feel while singing on stage? Have you seen the stage design for Junior Eurovision 2015? What do you think about it?

When I’m singing on stage it feels like magic. I have seen a small video of the stage in Sofia and I looooooovee it! It actually also is a kind of magic stage, because of the form of a planet. I really love the design because it fits perfectly with my song Million Lights.

E+: If you could be invisible for a day what would you do?

If I would be invisible for a day I would like to follow a famous artist. How it goes backstage, how they prepare, and perform for a big audience.

E+: If you had the chance, which singer would you choose to sing in a duet with?

I’d love to sing a duet with my The Voice Kids coach Marco Borsato. His songs are beautiful and really inspire me. Joss Stone also inspired me very much, I love to sing her songs and like the way she entertains her audience.

E+: Do you usually watch the senior Eurovision? Would you like to take part in the future?

E+: If you had to choose a Dutch act to compete at Eurovision, what would be your choice?

I think I would sent my Voice Kids coach Marco Borsato. The way he moves and inspires people with his songs is really special. Whole Europe has to see and feel that.

I’m realllllyy looking forward to the Junior Eurovision Song Contest in Bulgaria this year, and I hope you too!
See you in Sofia, kisses Shalisa!

Thank you very much for your time and see you in Sofia!

Shalisa has also recorded an exclusive video message for the readers of ESC+Plus, take a look below: